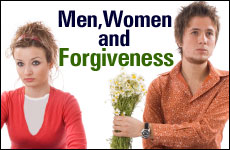 Our relationships are strengthened or weakened by hundreds of small actions and communications we share with each other. When we are paying attention and offer help or empathy or thanks, for something, it strengthens our relationships.

Insults, neglect and ignoring, whether intentional or not, create a breach in relationships.

When your spouse, your child or your friend expects you to be there for them and you either ignore, neglect or even forget them, that creates a breach in the relationship. This can then lead to resentment by the offended party. What happens as a result is that you become less caring and trustful. This can start downward cycle which can often lead to a long-term negative effect on the relationship.

Psychologists have reported that there are differences in how men and women see and experience apologies. A woman apologizes to maintain a relationship, and feels good about her efforts. When a man apologizes he ends up feeling a sense of loss.

Women appreciate the benefit of reconnecting with someone whose feelings have been hurt, whereas men view the apology as a loss of “face”. For a man to admit he did something wrong it is an affront to his ego. Men are more conscious of their status and how their position of power is perceived. So whereas a woman can feel enriched by the strengthening of the relationship after her apology, a man can often be left with the feeling of being diminished after he apologizes. Understandably, this can be a challenge in a marital relationship for the man.

Apologizing is important in all relationships; whether in parenting or business or other areas of our lives. People are sometimes reluctant to apologize for the same reason men hesitate to apologize. A parent or a boss may be concerned with a loss of status. Yet not apologizing when it is warranted gives the impression that your status is more important to you than your relationship is with the other person. As a parent or executive you also put yourself in the position of losing credibility by not apologizing. A simple work example is an executive who might be very critical when someone comes late to a meeting, but does not apologize or give a reason when they are late.

Often, you need to apologize because you have violated a principle or standard that you expected the other person to uphold. This is particularly an issue for parents because you are the role model for your children. The most important aspect of being a role model is being authentic. It means you do what you say.

A healthy, loving relationship is not possible without forgiveness.

A healthy, loving relationship is not possible without forgiveness. You cannot have a loving and rewarding relationship if you make it a regular habit to hold on to bad things that happened in the past. Without forgiving, it means you are holding on to feelings of resentment and blame, which is very unhealthy for a good relationship.

Letting go of resentment and bitterness is a particularly difficult challenge for people after a divorce. They easily fall into a state of mind of blaming their spouse, for all their perceived hurt and misery. This interferes with their ability to take charge of their life and move forward. I once had a client who was stuck in such a place and I eventually got him to see things differently by getting him to agree that it was of his own volition, that he chose to marry his former spouse in the first place. Therefore, such a person should take responsibility for his role in both the marriage and its breakup. To withhold forgiveness is to remain feeling like a victim.

Psychologists have long emphasized the health benefits of letting go of grudges and bitterness even without the second party apology. Such health benefits include: less stress and hostility, lower blood pressure, fewer symptoms of depression, anxiety and chronic pain, and lower risk of alcohol and substance abuse.

There are even those that advocate initiating forgiveness. You can offer it as a gift to the person who has hurt you, especially in the case of a close loving relationship. Strengthening your relationships comes from being able to forgive.

Dr Morris has been a clinical psychologist for over 25 years helping couples, families, adults and young adult males. He is in private practice in Jerusalem. He is an expert in the growing field of the psychology of well-being and has run workshops in the USA and Israel. Dr Man can be contacted by phone in Israel at 054-4635726 and in USA/Canada at 1-866-4101414. Email contact is at morris.mann@gmail.com, or his coaching website at www.morrismann.com.

Expectations of Marriage: Why So Many Marriages are Doomed

The Peaceful Fight
Vayelech 5783: Regret and Repent
Rabbi Sacks: Focus On the Important, Not the Urgent
Put Your Foot Down: Are Human Feet Poorly Designed?
Comments
MOST POPULAR IN Family
Our privacy policy
Aish.com Is Looking for Great Writers