Me, the Office Rabbi 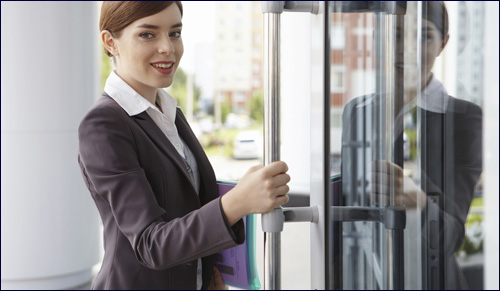 I thought that work wasn’t the place to discuss religion. All that changed once word got out that I was religious.

When I was hired at a publishing company in Dumbo, Brooklyn I decided that I was not going to discuss my religious beliefs with my co-workers. It’s not that I’m ashamed of my religious beliefs, far from it. It’s just that the office is a place for work, not theological discussions. And I didn’t want to come across as a fanatic who is always talking about my religion.

But word got out that I was religious. Maybe it’s the long-sleeves I wear, or the fact that I leave early on Fridays, or that I never go with my co-workers to non-kosher restaurants after work. And now all my co-workers want to talk about is religion. A Buddhist co-worker asks me why we Jews have so many Torahs in thier synagogues. “Isn’t it kind of showing off?” she asks.

“Why does a rabbi have to bless food before you can eat it?” another co-worker asks.

“What’s the deal with Purim?” my friend Teri wonders. “Isn’t it just a Jewish Halloween?”

Usually I just reply, “That’s a good question,” and kind of shrug my shoulders. I feel frustrated. I want to answer my co-workers questions but just like there’s a separation between church and state I’ve made a separation between talking about my religious beliefs and my office.

Dwayne, a computer programmer in our office, asks me out. He’s not Jewish. He’s from Tennessee and doesn’t know what Mazal Tov means. I explain to him that I can’t date him because I’m Jewish. He’s disappointed; he’s already been turned down by a Southern Baptist and a Mormon, and now by a Jew.

Dwayne is an evangelical atheist because he’s always trying to convert me to atheism.

Dwayne is an atheist. I call him an evangelical atheist because he’s always trying to convert me to atheism. He’s a nice guy, but he assumes that I’m religious out of ignorance. “The best defense for atheism is reading the Bible,” he tells me.

He assumes that I haven’t wrestled with my faith. That I haven’t carefully considered the arguments against God and chosen to be religious anyway. But I say none of this to Dwayne. I just smile and thank him for giving me food for thought.

People also come to me when they’re going through a religious crisis. “My daughter is planning on marrying a non-Jew,” a Jewish co-worker relates. “I feel like I failed. I should have raised her with more religion.”

I don’t know what to say. I want to reach out to her. I want to tell her that it’s never too late. I feel terrible for not helping her, but what am I supposed to do? My co-workers expect me to be the office Rabbi. They expect me to answer their questions, debate their arguments, and comfort them when they’re having religious difficulties, but I didn’t sign up for any of this!

My resolve to keep my religious beliefs private is tested one day when I’m invited out to lunch with our CEO, the head of my department, and a bigwig in the publishing industry. The lunch is in a non-kosher restaurant. “No problem,” a fellow religious co-worker explains to me. “What you do is order a salad and pretend to eat it while secretly slipping it into your napkin.”

What is this? The Spanish Inquisition? I call my Rabbi and he says that won’t work. It’s considered maris ayin—the appearance of wrong doing. If I order a salad other people will think it’s kosher and they might order it as well. “You can order a coke,” he says, “but that’s it.”

As the meeting draws near I’m not sure what to do. Everyone makes their order and then the waiter comes to me. “What would you like?” he asks.

Everyone looks at me. “You can’t eat anything?” my department head asks me.

“I keep kosher,” I explain.

“Can’t you just have a salad?” the publishing bigwig asks.

The blood is rushing to my face. I’m embarrassed and uncomfortable, but I explain that the Talmud states that the vegetables in a salad could have been cut with a knife that cut non-kosher meat.

“Oh, the Talmud,” my department head says, nodding. The Talmud is a is a large, weighty collection of books and in the publishing industry if there’s one thing we respect it’s books. They start discussing the Talmud before drifting back to the purpose of our meeting.

It was terribly awkward, but once it was done it felt like a weight had been lifted off my chest. I’m a religious person and everyone knows it. I can’t hide it and you know what? I don’t want to.

That restaurant lunch was a watershed event for me. I still don’t bring up religion at work, but when someone wants to discuss it with me I’m up for it. Now I take the time to answer my co-workers questions. I comfort them when their having spiritual problems and even get drawn into the rare, friendly debate. I’ve been surprised by the thirst my co-workers have for religious knowledge.

Armies need chaplains, and I guess a publishing company needs a friendly office Rabbi as well.

Lori Holzman has a BA in English and a MS in Information and Library Science from Queens College. She works at an Educational Publishing Company in New York. She has published articles in Listen Magazine, The Jewish Studies Journal and the Knight News. She is also the author of the best-selling picture book Chaim Ephraim and the Shabbos Guests.