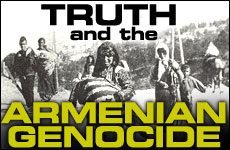 Genocide denial must be intolerable, above all to those for whom "never again" is a sacred principle.

Was there an Armenian genocide during World War I?

While it was happening, no one called the slaughter of Armenian Christians by Ottoman Turks "genocide." No one could: The word wouldn't be coined for another 30 years. But those who made it their business to tell the world what the Turks were doing found other terms to describe the state-sponsored mass murder of the Armenians.

In its extensive reporting on the atrocities – 145 stories in 1915 alone – The New York Times described them as "systematic", "deliberate," "organized by government," and a "campaign of extermination." A Sept. 25, 1915, headline warned: "Extinction Menaces Armenia." What the Turks were embarked upon, said one official in the story that followed, was "nothing more or less than the annihilation of a whole people."

These were not random outbreaks of violence, but a nationwide slaughter.

Foreign diplomats, too, realized that they were observing genocide avant la letter. American consular reports leaked to the Times indicated "that the Turk has undertaken a war of extermination on Armenians, especially those of the Gregorian Church, to which about 90 percent of the Armenians belong." In July, US Ambassador Henry Morgenthau cabled Washington that "race murder" was underway – a "systematic attempt to uproot peaceful Armenian populations and... to bring destruction and destitution upon them." These were not random outbreaks of violence, Morgenthau stressed, but a nationwide slaughter "directed from Constantinople." In his memoirs, he bluntly labeled the butchery "The Murder of a Nation."

Another US diplomat, Consul Leslie Davis, described in grisly detail the "reign of terror" he saw in Harput, and the corpses of "thousands and thousands" of Armenians murdered near Lake Goeljuk. The mass deportations ordered by the Turks, in which hundreds of thousands of Armenians were crammed into freight cars and shipped hundreds of miles to die in the desert or at the hands of killing squads, were far worse than a straightforward massacre, he wrote. "In a massacre many escape, but a wholesale deportation of this kind in this country means a longer and perhaps even more dreadful death for nearly everyone."

Other eyewitnesses, including American missionaries, provided stomach-clenching descriptions of the "terrible tortures" mentioned by Morgenthau. Women and girls were stripped and raped, then forced to march naked through blistering heat. Many victims were crucified on wooden crosses; as they writhed in agony, the Turks would taunt them: "Now let your Christ come and help you!" Reuters reported that "in one village, 1,000 men, women, and children are reported to have been locked in a wooden building and burned to death." In another, "several scores of men and women were tied together by chains and thrown into Lake Van."

Talaat Pasha, the Turkish interior minister who presided over the liquidation of the Armenians, made no bones about his objective. "The Government ... has decided to destroy completely all the indicated persons" — the Armenians — "living in Turkey," he wrote to authorities in Aleppo. "An end must be put to their existence ... and no regard must be paid to either age or sex, or to conscientious scruples." Talaat told Morgenthau that "we have already disposed of three-quarters of the Armenians; there are none at all left in Bitlis, Van, and Erzerum." To the ambassador's remonstrations, Talaat curtly replied: "We will not have the Armenians anywhere in Anatolia."

Was there an Armenian genocide during World War I? The Turkish government today denies it, but the historical record, chronicled in works like Peter Balakian's powerful study, The Burning Tigris (HarperCollins, 2003) is overwhelming. Yet the Turks are abetted in their denial and distortion by many who know better, including the Clinton administration and both Bush administrations, and prominent ex-congressmen-turned-lobbyists, including Republican Bob Livingston and Democrats Dick Gephardt and Stephen Solarz.

The murder of a million Armenians at the hands of the Ottoman Turks was genocide.

Particularly deplorable has been the longtime reluctance of some leading Jewish organizations, including the Anti-Defamation League, the American Jewish Committee, and the American Israel Public Affairs Committee, to call the first genocide of the 20th century by its proper name. When Andrew Tarsy, the New England director of the ADL, came out last week in support of a congressional resolution recognizing the Armenian genocide, he was promptly fired by the national organization. Shaken by the uproar that followed, the ADL finally backed down. The murder of a million Armenians at the hands of the Ottoman Turks in 1915, it acknowledged yesterday, was "indeed tantamount to genocide."

Now the other organizations should follow suit. Their unwillingness to acknowledge that the Turks committed genocide stems from the fear that doing so may worsen the plight of Turkey's beleaguered Jewish community, or may endanger the crucial military and economic relationship Israel has forged with Turkey – the Jewish state's only such relationship with a major Muslim nation. Those are honorable concerns. But they cannot justify keeping silent about a most dishonorable assault on the truth. Genocide denial must be intolerable to everyone, but above all to those for whom "never again" is such a sacred principle. And at a time when jihadist violence from Darfur to Ground Zero has spilled so much innocent blood, dissimulation about the jihad of 1915 can only aid our enemies.

The Armenian genocide is an incontestable fact of history. Shame on anyone who refuses to say so.