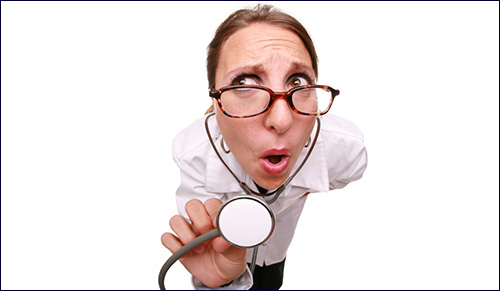 Part 2 of the abbreviated dictionary of Jewish diseases.

In Part One, I gave you the results of my personal research into what could or might be a “Jew-sease” that only occur among We Jews, given our unique background and biology.

Illness: Chazzeritis. An illness where the sufferer is obsessed with pathological cheapery.

As a writer and a Jew, I like to be thorough. So I have more entries from my Jewish medical guide. Call it a public service.

Look at it this way, God forbid, you have enemies, you can always say “May you make it big in software, have a digital mansion in Silicon Valley with 100 automated bathrooms, and then may you need every one of them because you’ve contracted a mild case of grepsophilia.”

Illness: Grepsophilia. Chronic belching in a variety of circumstances. True, we all do it from time to time. Attractive it isn’t, but after five or ten matzo balls, what’s a stomach to do? This is a normal Jewish reaction. The grepsophiliac, however, is a constant grepser in any and all situations. This condition exists in both kinder and their parents.

Symptoms: Anything can trigger an attack from Cream of Wheat to a Little League game (where either father who’s watching, or son who’s playing, may be affected) to paying full price for say, a George Forman grill, even on the Shopping Network. Some grepsophiliacs hiccup or gurgle, while those seriously afflicted may belch with such force a B52 could take off from the gas alone. Gentiles may have acid reflux or Gerd. Upon testing, We Jews have gornished. As others find them long-winded (among other things), many grepsophiliacs, as a secondary result, are forced to sit alone, clacking at HeebDate.com in a windowless room stocked with AirWick.

Illness: Emmesophilosis. An underrated condition where the individual is positively forced to tell the truth no matter what, even if it could/might bring on an angina attack in others.

Symptoms: Of course We Jews are bound to honesty. We’re expected to tell a clerk if we get too much change, admit we caused those little dings on our neighbor’s hybrid, stand up for what we believe, and without exception, talk truth to God and those on Facebook. Emmesophilics, however, are obsessed with expressing “their” truth – about everything, especially, you. They are incapable of telling a white lie, or even shutting up. Typical remarks may include, but are not limited to:

“Your new baby. Not a beauty, but you can fix it later.”
“Even after those treatments you still look 10 years older.”
“Listen, your son Hymie would be better off applying to clown school than trying to get that online degree in dairy herd management.”
“Your new house? I only pray the roof doesn’t cave in.”
“The brisket you made? Darling, your dog will enjoy.”

The condition is often confused with yenthimphilia, (but the yenthimphiliac opens a mouth about others). They may appear insensitive, but they’re very sensitive, should, God forbid, you mention their new haircut is chaloshes!

Illness: Chaloshism. The chronic tendency to get nauseated or faint at the unexpected or expected.

Symptoms: While We Jews are an emotional people capable of becoming nauseated or fainting at both good and mostly not so good news, say: a rotten corned beef sandwich for which we paid $14, the fact that our child is marrying a lobsterman, our fiancée is giving up law to study origami. These are all examples of good reasons to fall down. The chaloshist, however, finds a reason to throw up or fall down at most pieces of news. For example, should their husband use the good guest towel, they need a vat of Kaopectate. If their son gets a B plus in chemistry, they need it intravenously. Should their Shabbos challah not braid correctly, they’ll plotz altogether – especially if family and friends use the word “Overreacting.” Remember, it’s a condition. The only groups studying this phenomenon are Insurance companies. Fortunately the online Society for Chaloshism is fighting this as ethnic profiling.

Illness: Idiopathicpneumopollinosis. This is a highly under-rated condition known to Gentiles as “allergies.” The difference is, for We Jews we’re not just talking peanuts, but a plague that makes many of us break out into something at virtually everything around, in, or near us. One researcher, Shlomo Fliegel, feels an Egyptian sorcerer was getting us back for Passover. Then again, Shlomo also joined the Church of Ed Wood, and wears his toupee inside out.

Symptoms: In addition to the usual toxins, such as all non-Kosher foods and pollen, those afflicted have a variety of symptoms which can occur spontaneously – or not. The triggers may include water, daylight, the moon, their mother, mechanical devices, exercising, the thought of exercising, touching, and their mates, among others. Upon exposure, the sufferer may experience coughing, sneezing, wheezing, unsightly rashes, and in more stubborn cases, tics and plotzing. Each of these can occur alone or together, but the one constant is chronic shnarfling. Trust me. It’s not “all in their mind” and this diagnosis should do away with any assumptions that the Jewish wife is “cold” toward her husband in you-know-where.

Illness: Meshushugganicity. A general condition of lunacy which could be temporary, chronic, or triggered by unusual stress, for example, your mechutonim come for Shavout, and decide to stay till Rosh Hashana.

Symptoms: Behavior varies in seriousness from odd bouts of wearing ones underwear inside out to becoming obsessed with inventing a square Hamentashen The diagnosis of meshushugganicity is highly generalizable. The only true test is through general observation by a group of Jews who say: “Hey, look at that meshuggena!”

Illness: Chazzeritis. An illness where the sufferer is obsessed with pathological cheapery. Whether food or things, “junk” is the style of choice. Of course this does not include those addicted to a) bargain hunting; b) negotiating; c) a thing for kugel chips, all of which is healthy Jewish behavior.

Symptoms: The chazzeritic, however, spends his or her day scouting the “Free” section on Craigslist or finding old people to take them to thrift shops on Wednesday and has them buy for him at a discount. As a result, they could be featured on “Hoarders” as their house is filled with truly ugly tchotchkes like free broken can openers, half a mattress, and used pillows made in fifth world countries. As a result, common secondary conditions are shlumperdikism which makes them look like hobos, and an assortment of unpleasant itchy rashes from infestation, or what’s breeding in their bargains.

You Think Your Job Is Bad?
The Softball Player
How This 6 Generation Bread Baker Brought Back Israel’s Ancient Grains
Olivia Newton John’s Grandfather was a Nobel-Prize Winning Jewish Physicist
Comments
MOST POPULAR IN Jewlarious
Our privacy policy
Aish.com Is Looking for Great Writers