And the Oscar Goes to? 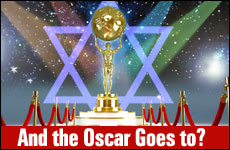 The most intriguing rejectees from the San Francisco Jewish Film Festival.

The San Francisco Jewish Film Festival is the first of more than 100 Jewish film festivals worldwide, and the largest Jewish film festival in the world. It boasts 30,000 attendees and has exhibited 1,300 films over its 32 years and just wrapped up its 2012 season.

Sadly, due to its prestige and popularity, the Festival cannot accept every film submitted. In fact, only 58 films were chosen for this year’s Festival. This leaves a lot of disappointed Jewish filmmakers. As a small consolation to them, I’ve profiled below some of the most fascinating rejected films from this year’s San Francisco Jewish Film Festival. And as a reminder, F. Scott Fitzgerald papered his wall with rejection notices before he sold his first short story, so, future Judaic filmmakers – keep at it!

Jewish Pastry Pioneers
Who doesn’t enjoy tasty Jewish pastry? Okay, granted, there’s one guy in Newark named Herb who has expressed disdain, but for the most part, Jewish pastry is a mouth-watering treat. But what do we really know about the creators and history of said pastries? My point exactly. At long last, this comprehensive documentary profiles such Jewish pastry pioneers as Pinchas Hamantaschen, Mendel Challah, Yitzchak Babka, Menachem Rugelach, and Batsheba Blintz. Free pastry samples will be available during intermission, including sugar-free, gluten-free, and fat-free offerings. Life just doesn’t get any sweeter.

Shlomo
The musical “Shlomo” is a Jewish take on The Who’s iconic rock opera, “Tommy.” Whereas in that production, Tommy became a pinball wizard, Shlomo similarly becomes a sort of Duke of Dreidel. Oh, sure, he starts innocently enough, using pennies, raisins, hazelnuts and chocolate Chanukah gelt as currency. But before long, Shlomo masters the dreidel game and starts betting serious money. Soon, his budget and his life spiral out of control and he resorts to increasingly more dangerous acts to make a living from dreidel. Musical numbers include: “It’s a Goy,” “Dreidel Wizard,” “We’re Not Gonna Spin It,” and “Shlomo Can You Loan Me?”

Sukkah Wars
A fun rivalry gets way out of hand when two friends make a playful bet about which of them can create the neighborhood’s best-looking Sukkah for Sukkot. They start with the traditional wood and palm fronds, but then graduate to wall-to-wall carpeting, a security system, air conditioning, landscaping, designer furniture, expensive custom art work, celebrity appearances, and laser lights. As the rivalry intensifies and the stakes are raised, each family attempts to undermine the efforts of the other via break-ins, setting fires, releasing snakes, painting offensive messages on the door, using exploding lulavs and etrogs, and having family members deported. By the end, both families realize that the rivalry is not worth the loss of their friendship, but it’s too late – they’ve all passed on to the great sukkah in the sky.

“Hamlet” in Yiddish
The Tragedy of Hamlet, Prince of Denmark, by William Shakespeare, is one of the world’s greatest and most acclaimed plays. It vividly portrays both true and feigned madness – from overwhelming grief to seething rage – and explores themes of treachery, revenge, incest, and moral corruption. Yes, this time-tested play lacks just one thing – a Yiddish production of it. At long last, that has now been remedied. The Tragedy of Heschel, Prince of Minsk dramatizes the revenge Prince Heschel exacts on his uncle Claudsky for murdering King Heschel, Claudsky's brother and Prince Heschel's father, and then succeeding to the throne and taking as his wife Gittel, the old king's widow and Prince Heschel’s mother. It makes much more sense when you actually see it.

Global Yarmulke (in 3D)
A plain black yarmulke may appear to be a somewhat unexciting focal point for a motion picture. And yet one of them not only stars on the upcoming “Global Yarmulke,” but also provides along the way plenty of laughter, tears, thrills and suspense. The story begins with the manufacture of the yarmulke, its sale and subsequent life among three different families, divorces, bankruptcies, yard sales, singles mixers, and years of abandonment in the back of a sock drawer. Look for cameos by Scarlet Johansson as a rare yarmulke collector – and Antonio Banderas as the rabbi who owns the world’s rarest yarmulke – the Jericho3000.

Jewish Aliens Attack!
Shockingly, despite hundreds of alien attack movies, not one has dealt with an attack by Jewish outer space aliens. Until now. “Jewish Aliens Attack!” begins innocently enough with the appearance of mysterious crop circles in the shape of Stars of David. When the mezuzah-shaped spacecraft lands, the Jewish aliens (“Jalians”) insist on being given an audience before all the world’s major delicatessen owners. At that subsequent meeting, the Jaliens admit their planet has been hit with a kosher food shortage and demand that their space craft’s storage unit be filled with pastrami, brisket, pickled tongue, latkes, blintzes, knishes, kosher dills, borscht, and pickled herring. They also insist on meeting Bob Dylan, Barbra Streisand and Jackie Mason. To demonstrate what could happen if these demands are not met, the Jalians nag to death the inhabitants of a small town.

Got Blood?
A family of Jewish vampires witnesses a horrendous crime and must, after feasting on the resulting blood, enter the Witness Protection Program to keep themselves safe. While there, they feast on their new neighbors, turning them all into soulless vampires. Since this is Los Angeles, no one notices the difference. Later, the family all has plastic surgery so they can safely re-enter society. Unfortunately, every member of the family ends up looking exactly like Jay Leno, which causes a whole other set of problems – though Jay ends up trying them out as guest hosts when he is out of town. A recent review describes “Got Blood?” as both “a charming, whimsical delight,” and “a consistently punishing, soul-crushing ordeal.”