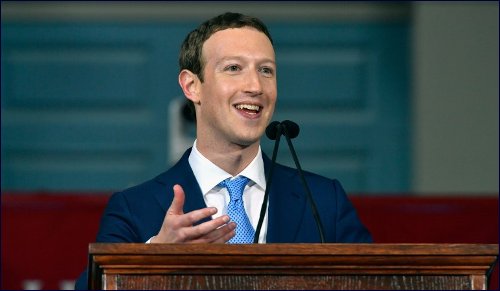 No matter how financially blessed, we all need to call upon a higher power to help us make our lives a blessing.

At age 32, Mark Zuckerberg is the youngest of the world’s ten richest people. His fortune presently hovers over the $60 billion mark. Financially there certainly isn’t a thing that he lacks.

At the Harvard graduation ceremony last week we heard the answer.

The university from which Zuckerberg never graduated, cutting his education short to pursue the business interest which would turn him into a multibillionaire , invited him to deliver the graduation address to those who completed their studies. Nearly three million people tuned in on Facebook to listen to his talk.

His words were a profoundly personal reflection on the lessons he learned from his success, as well as the ideas which shaped his life’s journey to the present. In considering their relevance to us, it is instructive to know that Zuckerberg and his wife have made a commitment to give away 99 percent of their fortune to charity and good works during their lifetimes.

A theme to which Zuckerberg kept returning was the notion that life only has meaning when it is filled with purpose. He proposed that a purposeful life can be achieved without wealth; its foundation is built on the causes for which we exert our efforts.

Every one of us has a purpose, a way in which we can in some small measure change the world.

“One of my favorite stories” Zuckerberg conveyed, “is when John F Kennedy visited the NASA space center, he saw a janitor carrying a broom and he walked over and asked what he was doing. The janitor responded: Mr. President, I’m helping put a man on the moon.”

Every one of us, Zuckerberg impressed upon the graduates, has a purpose, a mission in life, a way in which we can in some small measure change the world and thereby leave a lasting legacy.

And that’s where Zuckerberg’s prayer comes into play. It wasn’t until the very end of his speech that he mentioned it – but the emphasis with which he expressed it made clear it was a summation of all he had said before. For me as a Rabbi and for anyone who shares pride in our Jewish heritage it is inspiring to know that however much or how little one of the wealthiest men in the world formally identifies with his faith, two Hebrew words preface the blessing he passes on every night to his daughter.

These were Zuckerberg’s closing words at the Harvard commencement:

I am reminded of a prayer, Mi Shebeirach, that I say whenever I face a challenge, that I sing to my daughter thinking about her future when I tuck her into bed. It goes:

“May the source of strength, who blessed the ones before us, help us find the courage to make our lives a blessing.”

I hope you find the courage to make your life a blessing.

For those who want to quibble, I know this is not the typical Mi Shebeirach prayer we are accustomed to. Yet there is much we can take from learning that with all of Zuckerberg’s wealth he still feels the need to offer a nightly prayer. He refers to it by way of the Hebrew words which link it to our ancient heritage. It is a prayer which seeks the help of the one who is “our source of strength who blessed the ones before us.” It acknowledges that our success ultimately depends upon more than our selves. No matter how financially blessed, we all need to call upon a higher power to help us find the courage to make our lives a blessing.

Zuckerberg’s prayer bears a striking resemblance to the remarkable blessing in the book of Genesis with which God blesses Abraham:

“And I will make of you a great nation, and I will bless you and make your name great and you shall be a blessing” (Genesis 12:2).

God does not tell Abraham that he will be blessed. Instead he gives him the greatest blessing of all, a blessing conveying both commandment and prophecy. It is very good to be blessed; it is even better to be a blessing. The first is merely to receive. The second is to imitate the Almighty and to be a source of blessing to others.

That is a major message of our faith. How nice to know that a very wealthy member of our tribe just shared it with the newest graduates of Harvard.

Addendum: A Brief Response to Some of the Comments

Thankfully, most readers got it.

My article about Zuckerberg’s speech at the Harvard commencement exercises was a personal reaction to a moment when one of the wealthiest men in the world acknowledged, as the header to the piece put it, “No matter how financially blessed, we all need to call upon a higher power to help us make our lives a blessing.” For him to understand that and to echo the mission given to Abraham not simply to be blessed but to be a blessing is powerful proof of what our sages long ago taught us – that within every Jew, no matter how far removed from Judaism, there is a spark of divinity and indeed it is possible to learn something from anyone, even those totally estranged from God.

That certainly is far from any suggestion that my intention was to portray Zuckerberg as a Jewish role model. Yes, I am horrified by his marriage out of the faith. But what I do know is that ultimate judgment for his sins belongs to God – and I frankly am put off by the kind of super piety of name calling.

Perhaps the reader who put it best in the comments section, identified as Mesa, was this:

I don't think Rabbi Blech was trying to make Zuckerberg into a role model. Zuckerberg is what he is. But he made that speech at Harvard and said something profound from which we could all learn. That deserved to be shared no matter how we feel about what Zuckerberg does.

5 Ways to Get the Most out of Hebrew School