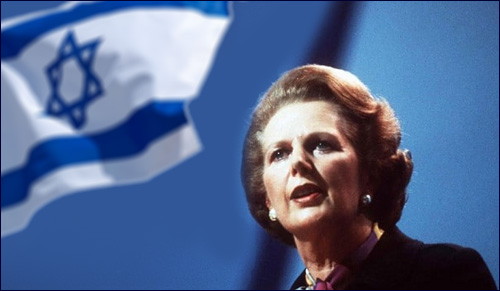 A new book explores her deep connection with the Jewish people.

Four years ago, following the death of former UK Prime Minister Margaret Thatcher, Robert Philpot, a British journalist, noticed an interesting pattern: almost every article noted that Thatcher was famous for her affinity with the Jewish community.

Intrigued, Philpot decided to research Thatcher's relationship with the Jewish People. What he found out is detailed in his new book: Margaret Thatcher – the Honorary Jew.

"If you ask most people who remember Thatcher what made her connect so strongly with the Jews,” Philpot said in an interview with Aish.com, “they will say: 'Well, she was the MP for Finchley." Thatcher's political career began in 1959 when she was elected Member of Parliament for Finchley, a constituency in north London with a large Jewish community.

"It seemed plausible to people that Thatcher cared about Jewish concerns because her voters cared about them. But when I stated researching I found out that her strong affinity with the Jews predated her political career."

Margaret Thatcher grew up in Grantham, a provincial town in the East of England. Her father was very religious and hostile to fascism of all kinds. In 1938, a Jewish girl named Edith Mühlbauer, the Austrian pen pal of Thatcher’s older sister Muriel, wrote a desperate letter to Muriel. The Nazis had taken control of Austria and already started deportations to Dachau. Could she please come to England and stayed with them?

“She told us what it was like to live as a Jew under an anti-Semitic regime.” Young Margaret was shocked.

The Thatcher family was not wealthy but Muriel's father was determined to help. At the next meeting of his local rotary club he read out Edith's appeal and the members decided to pay for her travel expenses and to give her a weekly allowance. They also agreed that each of them would host Edith in their homes for about a month.

Thatcher would later describe the experience of hosting that young refugee: “She told us what it was like to live as a Jew under an anti-Semitic regime. One thing stuck in my mind: ‘the Jews,’ she said, ‘were being made to scrub the streets.’”

“You know, you hear of a lot of terrible things, but they never happen to you…” she wrote. “That it could happen in Europe which had known the deepest feelings of religion, which had been the cradle of civilization, which had known every culture. Then I remember someone saying, ‘But you know cruelty and culture can go together.’ These things we didn’t just read about. They came right into our house.”

This early experience seems to have always stayed with Thatcher; she would loath anti-Semitism for the rest of her life. It was not, however, the only basis for her affection of the Jewish people. Philpot says that another reason was her identification with many Jewish values: personal responsibility, hard work, honesty, and the importance of education. These were the values she tried to promote as a political leader.

These values compelled her to forge a close relationship with Rabbi Lord Immanuel Jakobovits, the venerated Chief Rabbi of the UK at the time whom Thatcher later elevated to the House of Lords. In a speech she delivered at a dinner given in honor of Rabbi Jacobovits' retirement, she recalled a conversation she had had with him. "Lord Jakobovits and I first met when I was Secretary of State for Education… He impressed me with a remark which I shall long remember. ‘You are really the Minister of Defense’ he told me. And he meant, of course, that after what is learned in the family, it's what is taught at school that keeps the nation whole and strong.

“Jews relied mainly on learning as the supreme condition for survival."

"This has always had a particular significance to the Jewish people… Where others relied on prudent statecraft and military skill to preserve their integrity, Jews relied mainly on learning as the supreme condition for survival."

Rabbi Jacobovits, like other religious Jews, appreciated Thatcher's conservative policies. When the Church of England attacked Thatcher in 1986, claiming that she didn't care about poverty and the poor, Rabbi Jacobovits came strongly to her defense. He said that it was a baseless criticism and that she definitely cared. "As a deeply religious person, the church's opprobrium was hurtful to her – and the Rabbi's defense was very, very important," says Philpot.

She also relied on Jews in her political life. At some point, a quarter of her cabinet were Jews. "That might seem natural today, but actually it was not," Philpot says. "In 1955 there was not even one Tory member of Parliament who was Jewish, and 30 years later, 25% of the ministers in a Tory government were Jews." Before Thatcher, Jewish politicians had been often sidelined, in accordance with the British tradition of social antisemitism. But Thatcher would have none of that. During her tenure, former conservative Prime Minister Harold Macmillan grumbled that Thatcher's cabinet included 'more old Estonians than old Etonians'.

Philpot says that Israel was one of her three favorite countries. (The other two were the United States and Singapore.) “She admired the plucky, gritty spirit of a small country surrounded by enemies,” Philpot says. “She was the first UK prime minister to visit Israel as a prime minister, but she had also visited Israel much earlier, in 1965. After that visit she came back to Finchley and gave talks about what she saw."

Thatcher could be critical of Israel. While being friends with Shimon Peres, she was not very fond of Likud leaders Menachem Begin and Yitzhak Shamir. She also supported a peace process between Israel and the Palestinians. Despite that, says Philpot, she was always very clear in her objections to the PLO. "Internal correspondence with her ministers shows that she refused to allow them to meet with PLO leaders. She considered Arafat a terrorist, and said that only after the PLO has renounced violence and recognized Israel – only then she would agree to deal with them at a ministerial level."

Margaret Thatcher's term as a prime minister ended in 1990, but she went on representing Finchley for another two years. The people of Finchley, she used to say, were “her people.” Until the end of her life, she would look at them as a model community. “In the 33 years that I represented [Finchley],” she later wrote, “I never had a Jew come in poverty and desperation to one of my town meetings." She went on to explain that the Jewish community was so structured that Jews helped each other instead of relying on support from the government.

"Mrs. Thatcher was indeed philo-Semitic," John Sullivan, who served as one of Thatcher's speechwriters, once said. "She sympathized with Jewish theology on wealth creation…And she was impressed by the work of Jewish charities that she saw in her constituency of Finchley which had a large Jewish population."

Believing as she did in the importance of self-help, self-reliance and responsibility, Thatcher thought that Jewish communities were examples for all. Her constant wish, she wrote, was that Christians would take a leaf out of the book of these London Jews, the people that for her were always and ever “her people.”

Of Bombings and Hope