MAGA Teen & the Confrontation on the National Mall 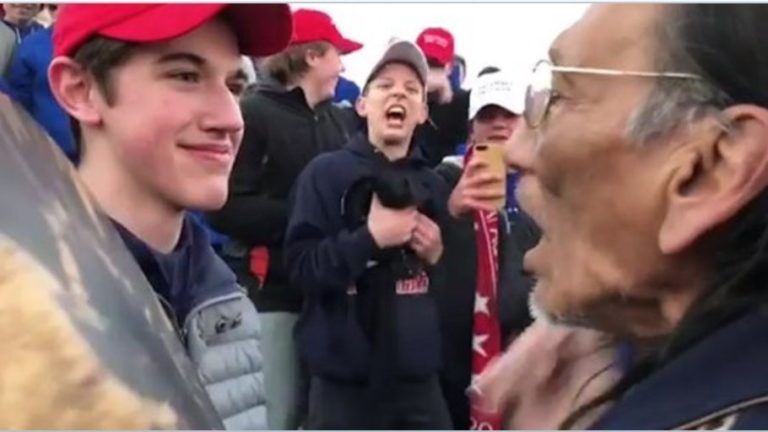 Let’s try and get past fear and hatred and foster empathy for one another instead.

It seemed tailor-made for our internet age of microscopic attention spans: a single photo of a young man wearing a red “Make America Great Again” cap and a smug smile, standing too close to an elderly Native American drummer.

Like millions of people around the world, I saw the image and I’m ashamed to say, I felt that I understood what was going on in the scene. Like everyone else, I brought my own feelings, history, prejudices and perspectives to the pictures and leapt to a conclusion about the participants.

The now iconic photo went viral, and then the Native American in the picture, Nathan Phillips, explained his version of events. Phillips, who lives in Ypsilanti, Michigan, was taking part in the Indigenous People’s March on the National Mall on Friday, January 18, 2019. He noticed a group of teens from the Covington Catholic High School in Park Hills, Kentucky, who had travelled to DC to demonstrate in the March For Life, which was also taking place on that day, and were engaged in an argument with a group of African American adults.

Like everyone else, I brought my own feelings, history, prejudices and perspectives to the pictures and leapt to a conclusion about the participants.

“Something caused me to put myself between (them),” Phillips explained. “It was black and white… What I saw was my country being torn apart. I couldn’t stand by and let that happen.” Some reports said that witnesses claimed the students had been chanting “Build the Wall” at the Native Americans. At least one woman said on a video of the confrontation that the kids were behaving “like a mob”.

Soon, the teenager in the picture, Nick Sandmann, added his own voice to the increasingly rancorous debate. Far from menacing Phillips, it was he and his friends who felt they were being attacked: first from a group of Black adults, and then by Phillips himself, who positioned himself directly in front of Sandmann, banging his drum loudly in the boy’s face. “I was still in the mindset that we needed to calm down tensions,” Sandmann has recounted. “I never felt like I was blocking the Native American protester. He did not make any attempt to go around me. It was clear to me that he had singled me out for a confrontation, although I am not sure why.”

These competing narratives seemingly did little to clear the air. “Nathan Phillips Lied. The National Media Bought It.” read a headline in The National Review, accusing the Native American elder of deliberately provoking a confrontation. Nick Sandmann disclosed that he and his family have received death threats.

The confrontation on the National Mall has become a political Rorschach test: which participants in it are victims and which are villains? How we perceive it has everything to do with the way we vote, with where we live, with what our values and lifestyles are. What actually took place seems to be of secondary importance, which is why I’m glad that this particular political story seems to be staying in our national conversation longer than we might have expected. A lot of ink is being spilled and a lot of words are being said, often past each other as we each vent our own prejudices – but at least we’re talking.

When it comes to people who might disagree with us talking these days is in short supply. “For the first time in surveys dating to 1992, majorities in both (American political) parties express not just unfavorable but very unfavorable views of the other party,” the Pew Research Center warned in 2016. “And today, sizable shares of both Democrats and Republicans say the other party stirs feelings of not just frustration, but fear and anger.”

We’ve got to a point where we look at others who harbor different worldviews and see not people with honest differences and priorities, but people who are willfully wrong and dangerous instead. What can we do to break this cycle of hate and mistrust, and start coming together instead?

Perhaps one place to start looking isn’t in 21st Century America, but in ancient Egypt instead.

The weekend after the confrontation, synagogues around the world read about how Moses led the Jewish people out of the land of Egypt. Moses was an unlikely leader. He was raised in comfort in the palace of Pharaoh, not among the Jewish slaves whose toil he would one day work to end. Yet when Moses was a young man, he was struck by the misery of his fellow Jews: “And it came to pass in those days when Moses was grown up, that he went out unto his brethren, and looked on their burdens, and he saw an Egyptian man smiting a Hebrew man, one of his brethren.” (Exodus 2:11).

The great Jewish sage Rashi is struck by Moses’ extreme empathy: even though he wasn’t the one enslaved and beaten, he felt for his fellow Jews. Moses “set his eyes and his heart to be grieved for them,” Rashi notes. Moses made an effort to understand what was going on with both his eyes and his essence. It’s a beautiful image: a royal prince who was willing to spend the time it took to both look and feel for his fellow men.

How many of us can say we take the time to do this today? How many of us pause to really try and experience what others are going through, instead of relying on our own preconceptions and ideas?

It takes time to try and see the world from another person’s point of view. In her 2008 book I Thought it Was Just Me (But It Isn’t), University of Houston Professor Brene Brown cites nursing researcher Theresa Wiseman, who has identified four attributes of empathy:

2. Being nonjudgmental – allowing other people to explain their motivations and reasons for behaving and feeling the way they do.

4. Communicating that we understand the way another person feels – instead of dismissing other people’s concerns, communicating that we hear what they are going through. This helps us make sure we’ve really understood what people are trying to tell us.

Try and spend a few minutes looking at the world from a different perspective. Admit that other people’s feelings and points of view are valid, too.

The altercation between kids wearing MAGA baseball caps and a Native American drummer on the National Mall seems almost tailor-made to tap into the deepest and most divisive problems in America today. It has all of the most explosive components: the Right to Life March, Native American culture, racial insults and epithets, seemingly different life experiences and political affiliations. It can seem almost impossible to look at all the participants and see them as “brethren,” to try and view their thoughts and views as worthwhile as our own.

And that’s precisely our challenge. To try and listen instead of speak. To hear all the facts instead of passing judgment. To look at the people on the National Mall last week not as symbols or object lessons, but as living, breathing people, individuals who might look a lot like us if only we take the time to get to know them.

A postscript: News reports have identified the group of adults who taunted the Covington High School students with racially-charged epithets as member of the "Hebrew Israeliste" community who, witnesses report, were shouting inflammatory comments at both the Native Americans and the white students on the National Mall.

Muhammad Ali: Give Up Or Get Up

When My Best Friend Dumped Me

Shake Off the Dust and Get Up

Principle of the Soul #5 - It's the Thought that Counts
Scientific Curiosity and the Divine Encounter
Mind Over Milkshakes
Love the Convert
Comments
MOST POPULAR IN Spirituality
Our privacy policy
Aish.com Is Looking for Great Writers