Lost Amid the Pyramids 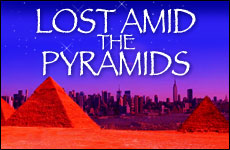 Passover is about redeeming our core identity.

Ancient Egypt was the Big Apple of its time. In terms of technology, art, architecture, literature, wealth, and highly organized bureaucracy, Egypt was a consummate civilization. It had been so for many centuries when a small group of 70 Semitic herdsmen arrived there 3,528 years ago.

No wonder that the second and third generations of that Semitic family, the grandchildren of Jacob, were enthralled by Egyptian society. Its grandeur, its power, and its cosmopolitan air were enough to dazzle any immigrant child.

Imagine an Israelite youth peering at the imposing line of towering pyramids that started at the Nile Delta and extended for 1500 miles southward. The largest of them, the Great Pyramid of Khufu, stood 481 feet high; its base covered an area of 13 acres. The monumental structure contained 2.3 million blocks of limestone, each averaging 2½ tons. Gazing at this centuries-old pyramid, our immigrant youth would not have known -- and perhaps not have cared -- that its construction took 100,000 laborers 20 years of toil. Who would not want to be part of a society that produced such wonders?

Out of the 210 years that our ancestors lived in Egypt, they enjoyed freedom and prosperity for 130 years -- about as long as Jews have flourished in America.

It is a syndrome that we Jews have experienced in many civilizations throughout many epochs of exile: The host society is so culturally advanced, so powerful, so urbane, that we become infatuated with it. Although we associate the Israelite experience in Egypt with slavery and oppression, out of the 210 years that our ancestors lived in Egypt, they enjoyed freedom, prosperity, and acceptance for 130 years --about as long as Jews have flourished in America. The story reeks of familiarity: the Egyptian-born generations of Israelites gravitated to the majority culture, hobnobbed with its elite, and eventually worshipped its gods.

Yet, like the next three millennia of their descendents, these proto-Jews were caught in an identity crisis. As much as they longed to become part of the suave and successful society that surrounded them, they also felt a fealty to their progenitors, Jacob, Isaac, and Abraham, as well as to the worldview that they had espoused. Thus, the Talmud tells us, the Israelites in Egypt retained their distinctive Hebrew names, language, and dress. Their hearts longed to assimilate, but their souls clung to the outer vestiges of their ancestral identity.

For over a century, the Israelites in Egypt, as free and prosperous residents, were poised tenuously between two opposing worldviews. These worldviews sprung from two divergent concepts of human identity.

Ancient Egypt was a society where animals, humans, and gods shared a fluid identity, with no definite distinctions between them. Many Egyptian gods bore the heads of animals, while sphinxes had the bodies of lions and human heads. Animals were venerated; bulls, cats, and crocodiles lived luxuriously in certain temples, and when they died they were mummified. Egyptian peasants lived in the same hovels as their beasts. Pharaoh was a god in human form, simultaneously Horus, the falcon god, and the son of Re, the sun god.

How different from the worldview of the patriarch Abraham! Abraham had believed in a Divine soul that distinguished humans from animals. Abraham taught that God was a single, transcendent, non-corporeal Being Who had created human beings "in God's image," which meant that humans similarly had a transcendent, non-corporeal essence -- their Divine soul. Animals, while not to be mistreated, were essentially different than human beings because they lacked this higher order of soul. While bestiality was commonly practiced in the ancient Near East, the Torah of the Jews would categorically forbid it.

This is no minor distinction. Identity determines what we will expect of ourselves, to what we will devote our energies, and in what direction we will seek fulfillment.

Animals are ruled exclusively by instinct. An animal can be trained to alter its behavior through positive and negative reinforcement. A bear can learn to dance if you give it enough treats or whip it hard enough, but its attraction to the treats and aversion to the whip are merely an extension of its instinct to seek pleasure and avoid pain.

Because human beings are endowed with Divine souls, they can override instinct with moral choices.

In the Jewish worldview, human beings, because they are endowed with Divine souls, can override instinct with moral choices. In fact, this is the definitive characteristic of human beings: They can choose between right and wrong -- even when the right alternative is painful and the wrong alternative beckons with pleasure.

People who define themselves as animals relinquish the possibility of transcendence and its accompanying joys: selfless love, altruistic giving, moral heroism, and spiritual growth.

Ancient Egypt, in fact, for all its cultic religiosity, had no concept of a transcendent soul separate from the body. Their elaborate tombs were well-equipped with food and clothing for the use of the deceased in the after-life. Some tombs of Second Dynasty noblemen were even equipped with bathrooms. The lengthy, secret process of mummification was necessary because, devoid of a transcendent soul, if the body decayed, it would be as if the person had never existed. Just like an animal.

While the God of Abraham had -- and demanded -- a definite standard of right and wrong, Egyptian society was essentially amoral. It had no codified or written laws at all. Pharaoh's arbitrary judgments were the law of the land. Egyptian courts were merely the vicarious arm of Pharaoh's whims.

Morality was a novel concept introduced into antiquity by the Jews. While, unlike Egypt, ancient Mesopotamia produced many legal codes, these were utilitarian rather than ethical. Their aim was to protect property rights and preserve the efficacious functioning of society. According to such codes, murder was forbidden because a murderous society degenerates into chaos. According to the Torah, murder is forbidden because human beings are created in the image of God and therefore human life has inherent value.

"The discovery of monotheism," writes historian Paul Johnson, "and not just of monotheism but of a sole, omnipotent God actuated by ethical principles and seeking methodically to impose them on human beings, is one of the great turning-points in history, perhaps the greatest of all." [A History of the Jews, p. 30]

The Israelite wavering between their two warring identities ended dramatically 130 years into their Egyptian experience. The reigning Pharaoh decided that the Israelites were becoming too numerous and posed the danger of a fifth column during wartime and gradually impounded them into slavery.

The Midrash relates that at first, Pharaoh played on their identity as loyal Egyptians by summoning them as volunteers in a national construction enterprise. All the Israelites except the tribe of Levi rallied enthusiastically to their civic duty. Gradually the volunteerism turned into conscription, and finally slavery.

The slavery exposed the dark side of Egyptian civilization. The grand monuments that the Israelites themselves had admired were built by human exploitation and torture. Pharaoh, worried by his astrologers' predictions of an Israelite redeemer, had male babies murdered and thrown into the waiting jaws of Nile crocodiles. Unconstrained by any ethical imperative, the taskmasters were cruel and sadistic.

Yet the Israelite infatuation for their adopted society was so tenacious that even at the height of the process of redemption, during the ninth of the Ten Plagues, some 80% of the Israelites declined to leave Egypt. Being a slave in the world's greatest civilization was to them preferable to the uncertain journey back to their archaic ancestral homeland. Even in the desert after their liberation, many of the former slaves pined for the amenities of Egypt. As the quip goes, God could take the Jews out of Egypt, but He couldn't take Egypt out of the Jews.

THE EXILE OF IDENTITY

Jewish history is a recurring process of exile and redemption. Exile is not only expulsion from our land; it is also an exile from our identity as Jews. When two identities conflict, only one will ultimately prevail.

Every Jew reading this essay is the descendant of Jews who repeatedly chose to identify as Jews.

Two millennia ago, there were as many Jews in the world as Chinese. Today, the Chinese number one billion and Jews number less than 14 million. This is due not only to repeated persecution and massacre, but also to the opting out of Jews in favor of the majority culture. Every Jew reading this essay is the descendant of Jews who repeatedly chose to identify as Jews rather than as Egyptians, Persians, Greeks, Christians, Muslims, or secularists.

One of the mitzvot of the Torah incumbent upon every Jew is to remember daily "the going out from Egypt." On the simplest level this means remembering the historic event of the Exodus, the dramatic evidence that God intervenes in history for our collective and personal redemption. On a metaphorical level, however, "the going out from Egypt" refers to our emerging from our "Egyptian" self-definition as an instinct-driven animal to our Jewish self-definition as a Divine soul capable of making moral choices and achieving transcendence.

Bibliography: A History of the Jews by P. Johnson; Wanderings by C. Potok; Tour Egypt website.

Visit aish.com's Passover site for everything you need to know about Passover.