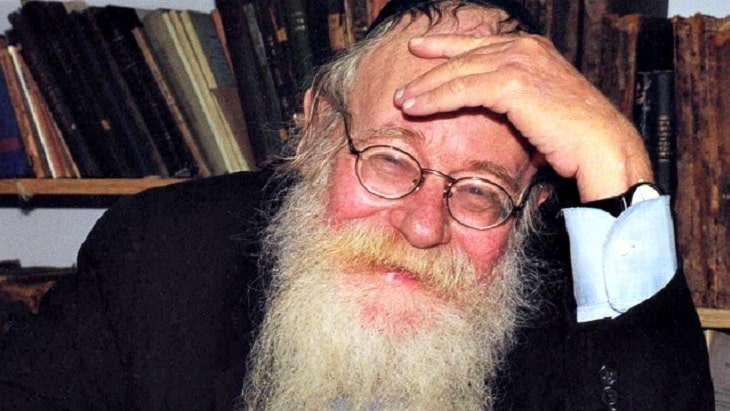 A long-ago lecture by Rabbi Steinsaltz inspired me to tap into 4,000 years of Jewish wisdom.

I was in college, exploring Jewish classes and activities at Hillel. Someone said an eminent rabbi named Adin Steinzaltz was visiting campus - he was embarking on an ambitious project translating the Talmud into Hebrew, English and French. His interpretations were penetrating and insightful, they said, and his translation was a major addition to Jewish knowledge. Did I want to come along and hear him?

I wasn’t sure that any rabbi attempting to translate the Talmud would have much to say to me. I pictured him as dry and stern, concerned only with dusty old texts. What could he possibly have to say to me?

As the auditorium filled up, I saw that Rabbi Steinsaltz wore a black coat and skullcap and sported a long beard that was turning white - exactly as I’d pictured him. Surely he’d disapprove of me and the other non-religious students in the room. Suddenly, he turned to the blackboard behind him, picked up some chalk and began sketching. Was he writing some obscure formula or Hebrew text I wondered? He drew a smiling cartoon mouse, finishing the sketch with whiskers and turned to face his audience with a huge grin on his face and launched into his talk.

Turned out that Rabbi Steinsaltz understood our worldview very well. After all, he’d grown up in a non-religious family too, in Jerusalem, in the 1940s and 1950s. As a teenager, Rabbi Steinsaltz felt the tug of religion and asked his parents if he could study Jewish subjects with a local rabbi. They agreed and eventually Adin Steinsaltz was leading an Orthodox life. By the time he was 23 years old, he was a high school principal - the youngest in all of Israel. In 1965, when he was 38, he began his monumental translation of the Talmud.

“What are we waiting for?” he asked the assembled students. It’s been many years since I listened to Rabbi Steinsaltz, but that central question remains burned in my memory. We each have so much potential inside of us – what’s holding us back?

For Rabbi Steinsaltz, responding to the pull of the Divine in our lives was akin to answering a great cosmic telephone, he told his rapt student audience.

In the Torah, Abraham, Jacob, Moses and Isaiah all hear God call out their names, and each of these towering figures replies in the same way: Hineni - “I’m here.” Rabbi Steinsaltz said, “The call goes everywhere, in every time, and never stops. But most people don’t hear it. When you hear the call you say, ‘Hineni – I’m here.’”

Rabbi Steinsaltz had a genius for making big ideas fun. That phone call he talked about - the pull of the Divine - is like someone in outer space looking for life in the universe. “Just imagine a person sitting on a star,” he said, “sending messages to other planets: he’s sending messages over and over. Now what will be the breakthrough point? The breakthrough point is when there is any answer. When at the end of nowhere, somebody answers.” That somebody can be each of us, if only we pay attention to the call of the Divine in our lives.

“Torah is the shared inheritance of all the Jewish people. We have a responsibility to share our common heritage with all Jews.”

Rabbi Steinsaltz often reiterated that “Torah is the shared inheritance of all the Jewish people. We have a responsibility to share our common heritage with all Jews.” I bought his books and read his wisdom. The thousands of pages he wrote are bursting with his unique style of humor, wisdom, encouragement and love.

Rabbi Stensaltz’s book The Essential Talmud first introduced me to the Talmud, describing its history and purpose. The last lines have always stayed in my mind: in a chapter called “The Talmud Has Never Been Completed,” he made the case that it’s up to us to continue studying the Talmud. He explained that even the most learned sages study the Talmud over and over, finding new knowledge each time. It helped give me the courage to begin studying Jewish texts.

His essays in Simple Words: Thinking About What Really Matters in Life (1999) has helped me cope with some of my most difficult decisions, applying Jewish wisdom to real world dilemmas. “(W)e may discover that God has always existed within us,” by thinking deeply about the words we use in our lives and what their deeper meanings are, Rabbi Steinsaltz wrote. Each challenge we face in life, no matter how hard, can help us improve and refine ourselves, uncovering our God-given purpose.

When I heard of Rabbi Steinsaltz’s death at the age of 83 this past Friday, August 7, 2020, I knew I would spend Shabbat rereading some of his books, and honoring his life by studying Torah in his memory. Rereading his works felt like hearing from a wise old friend, reminding me that I can achieve great things, bringing untold measures of holiness into the world if I only try to listen to that insistent, constant call of the Divine in the world. That message is his powerful legacy to us, the Jewish people.

Jerusalem United
It Takes A Lot Of Faith To Be An Atheist
How Instagram Brought Back This Nostalgic Soup
What Makes Eli Run?
Comments
MOST POPULAR IN Israel
Our privacy policy