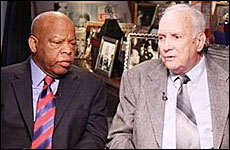 Elwin Wilson, a former KKK member, apologized for his racist past.

When Elwin Wilson, a former Klu Klux Klansman, recently died at the age of 76, he was remembered as a hero.

In his many obituaries, Wilson wasn’t excoriated as a Klu Klux Klansman, even though he once proudly supported that brutal group. He wasn’t condemned as a violent thug, even though he savagely beat up two civil rights “freedom riders” workers when they arrived in his South Carolina town in 1961. He wasn’t even remembered as a bigot, even though later in life Wilson admitted to carrying out numerous acts of aggression against civil rights protestors.

Upon his death, Elwin Wilson was instead remembered lauded as a peacemaker. “Elwin Wilson, who apologized for racist acts…” the New York Times wrote in his obituary.

After a lifetime of racism, Wilson explained that President Obama’s 2008 election was a turning point for him. “I didn’t vote for him, but I’m glad he’s there,” he said of America’s first black President. Spurred on by his son and a good friend, Wilson began to shed his racist views late in life.

“My daddy always told me that a fool never changes his mind.”

“My daddy always told me that a fool never changes his mind, and a smart man changes his mind,” he explained. Determined to begin to make amends in 2009, Wilson went to his local newspaper and admitted his participation in the attacks on freedom riders nearly 48 years earlier. When he found out that one of his victims, John Lewis, was now a member of Congress, Wilson travelled to Washington to apologize to him face to face.

“I attacked you, and I’m sorry,” he said. “I want to apologize. Will you accept my apology?” Lewis later recalled. Lewis did, and the two men embraced, weeping.

Lewis and Wilson went on to make several public appearances together, talking about their reconciliation. “I never thought I could apologize to this many people,” Wilson said. “I feel like I’m apologizing to the world right now.”

What was extraordinary about Wilson’s repeated apologizing was its openness. It’s unusual for people to bare their souls in this way – to admit embarrassing errors they’ve made and open themselves up to ridicule and criticism. While many of us might feel bad about past mistakes we’ve made and deeds we’re responsible for, how many of would be willing to admit them publicly, and ask for forgiveness?

Apologizing is embarrassing. To some, the notion of saying “I was wrong” or “I’m sorry” would seem to demean the person expressing remorse; it’s an admission of error that many of us would prefer not to make.

Yet this sort of self-examination and growth is what Judaism requires of all of us. And far from being embarrassing or showing us in a negative light, having the courage to admit past misdeeds and resolve to do better in Judaism is the hallmark of a great person -- one who is constantly striving to grow.

Nearly a thousand years ago, the great sage Rabbi Yehudah of Gerona wrote a formula for repentance to enable this growth. It perfectly encapsulates what God expects of us – not only those who have committed sensational crimes in our past – but each one of us, as we seek to evolve into better people day. In order to truly move beyond past deeds that hold us back, we must:

It’s not enough to quietly regret our actions. It’s not even enough to ask God for forgiveness or to silently resolve to try to be a better person in the future. The Torah specifies that we’ve harmed someone we can only be pardoned after we’ve made amends with the person we’ve injured. That means trying to rectify the harm, if possible, and seeking their forgiveness.

This is what Elwin Wilson did. He apologized wholly and unreservedly, even travelling all the way to Washington DC to confront the Rep. Lewis and apologize in person. And far from diminishing him, it enhanced him as a person, allowing him to reach heights – as a spokesperson, as a nationally recognized symbol of hope and reconciliation – that he otherwise would not have reached.

The Talmud talks about two different ways to make amends. We can repent for what we’ve done out of fear; this can be effective, removing the stain of past sins. But there is a second way to repent of our past actions: motivated by love.

When we do this, the Talmud instructs, our past sins aren’t only erased, they’re transformed into merits. Each time we succeed in overcoming our baser nature – when we truly apologize for and overcome our misdeeds – we’re able to stand on a higher level than we would have been capable of had we never made mistakes in the first place.

Elwin Wilson shows us it’s never too late to admit our mistakes. It shows us that we are each capable of growing and changing throughout our lives, and we each have it in our power to shape the deeds by which later generations will remember our names.

Drop Your Armor: Don't Be Afraid to Be You
Why My Iranian Mother Didn’t Want Me to Become a Religious Fanatic
The Jewish History of Prague
Why the Sexual Revolution was Bad for Women
Comments
MOST POPULAR IN Spirituality
Our privacy policy
Aish.com Is Looking for Great Writers