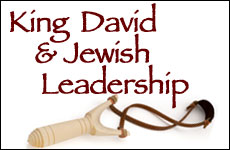 Four essential traits to being a leader.

Shavuot is not only the anniversary of the revelation of Torah at Sinai, it is the birthday of Jewish royalty as well, the day King David was born and died. To mark the event the Book of Ruth, which traces David’s ancestry, is read in synagogue on Shavuot.

David was a fearless warrior, composer of the Psalms – the most timeless and eternal poetry ever written – as well as one of the greatest Torah scholars of all time. As the slayer of Goliath, he symbolizes Jewish ability to beat overwhelming odds. And as father of the Davidic dynasty, he is the quintessential leader, bringing out the best in his people.

The famous story of David defeating Goliath begins with two opposing armies. The Philistine army encamped on one mountain, intent on destroying and conquering the Jewish kingdom. On the mountain directly across the valley was the Jewish army. Goliath was a giant soldier of huge proportions. He taunted the Jews daily to send out a champion to battle him. This battle of champions would determine which nation would be the victor, which nation would rule over the other.

For 40 days not one Jewish soldier had the courage to step forward and take on Goliath. Every soldier trained in the conventional rules of warfare knew that he had no chance against him. Then young David, a delivery boy untrained in war, arrived on the scene with supplies for his brothers who were in the army.

Hearing about the situation, with great courage he volunteered to defend Jewish honor. He was offered conventional weapons for those times – body armor and weapons – but David decided to face Goliath with his faith and his skills with the sling, knowing that there lay his strengths. He took an enormous risk and won.

Courage is a fundamental to leadership. It propels one to embrace challenge and take necessary risks, to unleash ground-breaking strategies and defy all the naysayers.

Unlike the Queen of England, David had quite a few decidedly un-aristocratic skeletons in the closet. Though he was a descendant of the tribe of Judah, his great-great-grandmother was Ruth, the Moabite convert to Judaism. Moving backwards from there, he could trace his ancestry to an incestuous union Lot had with his daughter. In addition, David had been a shepherd, not the most royal of occupations. Yet God chose David. Why?

David was not chosen king despite his lineage and his work with sheep – it was because of it. In God’s great love for the Jews, He appointed a shepherd for His flock, someone sensitive to all Jews – the nobleman, the rich and the commoner alike. Because of who he was and where he came from, David would care for the lower class of society as well, Jews at the bottom of the economic heap, Jews with deep dark secrets.

David never forgot his humble beginnings; he never became an arrogant king. The coins he minted reflect who he was – on one side were a staff and knapsack, symbols of a shepherd; on the other, the royal symbol of monarchy.

Humility enables compassion, kindness and genuine caring for others, as well as an ability to show genuine appreciation. This in turn helps a leader earn people’s loyalty. You cannot win people’s hearts if you don’t genuinely care about their welfare and well-being. Leaders inspire others – and inspiration is governed by the heart.

Do ordinary, humble beginnings make for great leaders? It’s a definite plus. Nearly 75% of all U.S. Presidents were in the bottom half of their school classes, and more than 50% of all millionaire entrepreneurs never even finished college! Dame Margaret Thatcher, the woman historian Paul Johnson called the “greatest woman leader since Catherine the Great,” began life in the apartment above her father’s grocery store.

King David experienced defeat, and it seemed all was lost. His own son Absalom rose up against him in rebellion. Through politicking and guile Absalom had persuaded a large majority of the Jewish people to join his rebellion. David was powerless in this confrontation as Absalom had the strength of an overwhelming numbers of supporters to replace him as king.

When Absalom approached Jerusalem to establish his monarchy, David and those loyal to him went into exile, leaving Jerusalem in defeat. All seemed lost, with not a shred of hope to reestablish himself as king. Yet he did not give up and “retire” or submit to his son. Rather David recognized his situation as a temporary setback and took action to reinstate his monarchy.

First, King David climbed the Mount of Olives, to catch a last glimpse of his beloved city, Jerusalem, praying for Divine assistance for a victorious return. Secondly, he established an intelligence presence in Jerusalem with his loyal followers. He then moved on, away from Jerusalem with his few loyal supporters to plan for the inevitable final battle with Absalom’s forces.

In that battle Absalom was killed, his forces miraculously routed. Ultimately David, in his great wisdom, did not simply return to Jerusalem as a vengeful monarch of former enemies. Instead he patiently waited till the representatives of the Jewish people invited and pleaded with him to once again return to be their ruler.

Defeat and failures are part of life. A good leader sees defeat as part of the process of success, and just keeps trying. Both Henry Ford and Walt Disney come to mind as entrepreneurs whose initial attempts ended in bankruptcy. Menachem Begin, one of Israel’s greatest prime ministers, lost eight Knesset elections and never abandoned his position as leader of his party.

The book of Psalms is a portal through which we can glimpse the inner David, his thoughts and feelings. He was a man of great passion, faith and optimism. David faced numerous personal struggles and adversity, in addition to challenges to his leadership. Many times his difficulties seem completely overwhelming, allowing him little chance of survival, and yet David doesn’t give up hope. His inner strength and optimistic outlook for a bright future comes from his knowledge that he is not alone. In Psalm after Psalm David reveals the extent of his relationship with God. With Him as inspiration, how can a person admit defeat?

Optimism gives a leader the high octane he or she needs to continue when all seems lost. It’s contagious: when times are tough a leader’s optimism gives hope, lifts spirits and builds strengths in others. Think of Churchill and the Blitz, or George Washington at Valley Forge. Optimism helps both leader and those being led to confront difficulties and hardships, endure stress and enable positive outcomes.

The Jews are a nation of optimists. What other nation on earth would remain optimistic for two thousand years that we would once again return to Israel, our homeland? And who else but the Jews are still optimistically waiting for a better world, a world at peace, and the coming of the Messiah – descendant of our quintessential leader, King David.

Enjoy your cheesecake and blintzes and have a happy Shavuot.

Chosen
It Takes A Lot Of Faith To Be An Atheist
How Instagram Brought Back This Nostalgic Soup
What Makes Eli Run?
Comments
MOST POPULAR IN Israel
Our privacy policy