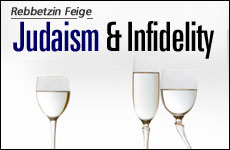 Why having an affair is such a serious transgression.

In today’s society, extramarital activity is so common. The media even promotes the idea that having affairs could actually be good for a marriage. Why does Judaism view having an affair as such a serious transgression?

The Torah recognizes the human being as a composite of body and soul. Both are significant and necessary to achieve our life’s purpose and mission. A body without a soul becomes an inanimate, lifeless entity. A soul without a body has no vehicle, no medium to carry it through life.

While both are important, they diverge in their primary desires and needs. The body in its physical configuration has much in common with the lower species, the animal kingdom, i.e. eating, sleeping, mating, etc. The soul, on the other hand, has more in common with its Godly source. It seeks to lift man upwards, connect him with the sublime, to help him attain his spiritual goals that will be consistent with its Divine origin. This would include praying, acts of charity, kind and humanitarian deeds, integrity in business, appropriate moral conduct, etc.

Character is defined by the choices one makes when spiritual and physical needs clash.

The challenge in our life’s journey is to successfully navigate the conflict between body – the lesser, baser part of ourselves, and soul – the better, more exalted dimension of our being. The mettle of a person’s character is defined by the choices one makes when spiritual and physical needs clash and pull us in different directions. A critical factor in this equation is that human beings have the remarkable ability to rationalize.

Maimonides, one of the foremost philosophers and teachers in Jewish history, expounds on the nature of idolatrous pursuits and behaviors. He notes that while we might assume that the worship of idolatry was motivated by philosophic constructs and beliefs, in fact, these practices were driven by sexual appetites. He explains that the Jewish people were proscribed by the Torah from engaging in the orgies and promiscuous behavior of the culture of their time. But the lesser part of themselves, the animal side, desired to indulge in the depravity of the nations around them. They were caught in this bind of the Torah’s exhortations on one hand and the insistent sexual desires on the other.

The problem was compounded by the fact that humans have a need to feel respectable and to think well of themselves. Since they could not indulge in the behaviors they lusted for and still feel worthy, their ability to rationalize kicked in. They rationalized that their capitulation to these behaviors and practices stemmed from a philosophic and religious position. They contended, Maimonides states, that they were now adherents of the given idolatry that permitted, promoted and even mandated these sexual practices that they craved. Maimonides concludes that idolatry was primarily a pursuit of indulgence, of permission and leave to act out at will sexually.

Consider Larry, a prominent businessman, who came in to plead his case. He was happily married – until recently. He met “a stranger across a crowded room” and knew instantly that she was his “soul mate.” He sought permission on religious ground to indulge the relationship. Needless to say, his rationalizations were not very compelling to an objective party, but he had totally convinced himself that he was entitled to his “soul mate.”

Or Jerry, who carried on a promiscuous relationship with Lisa, a woman 25 years his junior, maintaining all the while that he loved his wife no less. The long and short of it was that Jerry grew old and Lisa finally realized that she had put the best years of her life on hold. Jerry, a person who had considered himself a decent human being, ultimately suffered from a sense of his lost integrity. Lisa ended up forlorn and alone. It was nothing but a lose-lose situation.

I was recently counseling a couple who was trying to figure out if they had the emotional resilience to recover from the trauma of the husband’s infidelity. Foolishly, in the interest of their economic situation, they had decided to temporarily live in different cities until they would get on their feet financially. Alone and stressed in his new job, Mike, the husband, was a sitting duck for a coworker who was in what she perceived of as an unhappy marriage. An affair ensued. When Maggie, his wife, found out that her husband of 30 years, her childhood sweetheart and the only man she had ever loved had been unfaithful, the sense of betrayal was devastating to the point where Maggie almost came unhinged.

Related article: How To Build Trust in Marriage

Relationships are all too easy to destroy, and unfortunately so difficult to rebuild.

Remorseful protestations by Mike that the other woman meant nothing to him and that this was no more than a temporary lapse provoked by an unusual situation fell on deaf ears. His declarations of unending love for Maggie rang hollow and meaningless to her. Trust had been shattered and in its wake came insecurity. Maggie questioned Mike’s every move and their every interaction was punctuated by the resentment, hurt and anger for what he had done to her. Their relationship was affected by “an abscess that wouldn’t drain.”

It takes great determination, commitment, willpower and input of time and energy to put the shards back together again – if it can be done at all. Relationships, like all things in life, are all too easy to destroy, and unfortunately so difficult to rebuild.

Dear reader, as you have observed, we do live in a sexually permissive time, and it’s probably true that many practices previously eschewed have become commonplace and more acceptable. Over time, in the history of man, the pendulum has swung back and forth. Even as the winds have changed directions many a time, Torah teachings remain an anchor of stability even in the most turbulent of times.

The reason for this is the source. Torah, its principles and mandates emanate from a God who is not bound by the constrictions or limitations of time and space. He is above time and space. He spans past, present and future. Hence, His law is as relevant to us in our era as it was at the time it was given almost 4,000 years ago. It is addressed now as it was then to the human being whom He created.

Uncensored pleasure has taken hold, regardless of the pain of broken homes and human psyches.

Since He created us He has total knowledge of who we are, what we need and what is ultimately in our best interests, far better than we do ourselves. He is the manufacturer of our “hard drive.” He alone knows what it is that we must do or not do in order to function at an optimum level. We get it when it comes to technology. We fully understand that we are deficient in our expertise and perforce must depend on the manufacturer’s manual to navigate through the intricacies of any given technological equipment.

After all, wouldn’t it be foolish for me to assume that milk could fuel an automobile just because it tastes good to me? Similarly, conclusions on our part about what is constructive and productive for ourselves based on what feels or seems good is both ill-advised and destructive.

Dear reader, the opinions of pundits will be bantered about in the media, and they'll be alternatively confirmed and repudiated. But the bottom line is that they are the same old tricks of rationalizations cloaked in a current idiom. The lesser, baser voice of man is strident and very vocal. Lust, desires and the boundless pursuit of uncensored pleasure, regardless of the toll they exact and the pain of broken homes and human psyches, have taken free reign in our society.

Make no mistake, despite all the sophisticated pronouncements, this does not constitute progress. This is a return to the animal farm. It is an assault on the spirit, the distinguishing feature of man. Sadly, in defying and contravening the ageless wisdom of the Torah, it is the soul of man, the better part of himself, that will be left out in the cold in a lonely and unfulfilled heap.

Connecting: Passover Reflections
In the Shadow of David and Goliath
Where Do the Laws of Nature Come From?
Saadiah Gaon, Rashi and Maimonides: How Three Rabbis Revolutionized Judaism
Comments