Me and My Antisemitic Girlfriend 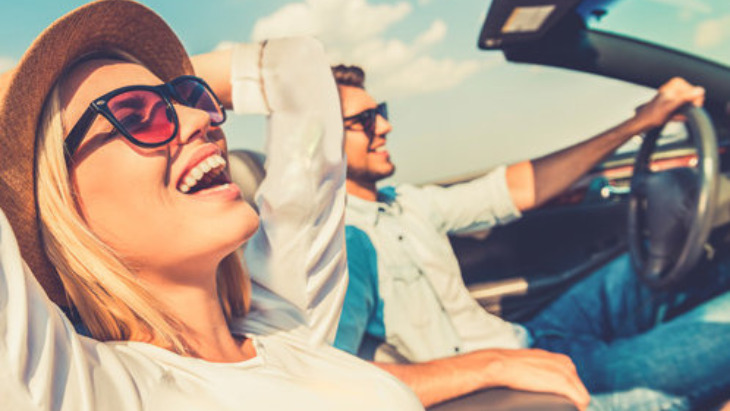 We were hurtling toward marriage despite my closeted interest in Judaism. One drunken night changed everything.

I had been dating Jennifer for a year and a half. Things were getting serious. My friends were all starting to get engaged or settling down into single life for the long haul. I felt the pressure building to commit to my relationship in a real way, namely having her move in.

Every time we had a few drinks Jen would ask me what I thought about living together. I would fumble with my words, trying to buy myself a few more months. I would lamely explain how I really liked my roommates and how tough real estate was in NYC. When the boozy haze cleared, there was no sign the next day that these conversations ever took place.

Soon, my excuses began to dwindle. By the end of June, both of my roommates got engaged and began making arrangements to move out by the end of July. I was left with a big empty apartment and nobody to share the rent. It seemed like now was the time for the “trial run” with Jen. We had agreed that she would move in at the beginning of August.

My mind raced ahead. “Trial run” sounded innocuous enough, but I had enough friends go through these scenarios that I knew how this would inevitably play out. We would spend a year living together, then pressure would mount to buy a ring and propose, then we would be engaged for another year, and then we would be married. Forever.

So this was it. It was the decision to last forever, yet it seemed like just a bunch of ‘I-guess-so’s piled up in a heap. I had something else on my mind as well, a secret looming larger by the day.

I had started becoming interested in my Judaism. And Jennifer wasn’t Jewish.

I had explored all sorts of spiritual pathways and Judaism was last on my list.

I had begun to a search for deeper meaning in life. I was always interested in philosophy and spirituality, but it the most general terms. That past winter I had started reading about Jewish philosophy. I had explored all sorts of spiritual pathways and Judaism was last on my list. It hadn’t registered as an option until one of my best friends sent me a lecture to listen to by Rabbi Akiva Tatz.

I began devouring them. Soon I had listened to almost every one of the lectures except the most relevant and onerous of them all: “Jew, Non-Jew and Intermarriage.” It leered at me each day as my mouse cursor brushed over it.

Meanwhile, my relationship with Jennifer was great, at least on paper. We had the same interests, liked the same foods, never fought. Yet, there was something missing. As my passion for spirituality grew, I noticed something in our conversations. I would begin talking about a deeper topic and she would follow along up until a certain point. Then, like hitting a cement wall, her face would go blank and she would change the topic. “Want to see a movie tonight?” or “What do you want for dinner?”

After a few months of learning more about Judaism, I started dabbling in keeping Kosher. I subtly cut pork and shellfish from my diet.

“Want to go for oysters?”

My inner world was beginning to diverge from the image I was portraying. I was living a lie.

I finally worked up the courage to share my journey with Jen. I took her out to a fancy dinner and told her that I needed to ask her something.

“If we were to have kids together, eventually, someday…I really want to raise them Jewish. Could you live with that?”

She fell silent and looked down at her plate, idly turning vegetables with her fork. She told me that she would have to get back to me.

There were so many Catholics in the world and so few Jews, why not root for the underdog?

The next week she told me that she could do that. She asked her mom what she thought, and her mom had agreed that it made sense. There were so many Catholics in the world and so few Jews, why not root for the underdog? And besides, neither of us was really religious. We could do Christmas and Hanukkah. No problem.

This made me feel much better. But I soon realized that I had just applied a band-aid when I needed to do brain surgery. What did it mean “raise the kids Jewish” if we were going to have Christmas in the house also? I became even more confused than I was before.

Fast forward to the 4th of July. Jen and I had decided to spend the long weekend at her parents’ house in a New York City suburb where she grew up. Her father, Jack, had finally warmed up to me, inviting me to the yearly golf outing that I had heard so much about but had not yet qualified for.

Jack took us out to see the fireworks. We watched them on the water where he knew a bar owner and his friend was playing guitar that night. After a beautiful fireworks display and many rounds of celebratory beers, we decided to head back to their house.

We were driving down the highway back towards Jack’s house and the conversation opened up, with a good deal of liquor lubricating it. After some banter about which band and beer we liked best, Jack brought up a new topic.

“Hey, Elliot. Do you remember my friend Steve? His son, Rob, nice Catholic kid. He ended up marrying this Jewish girl last year. Crazy wedding, I have to tell you. The girl’s father stood up in the middle of the ceremony and tried to stop the wedding. He started quoting scripture, said she was a lamb that strayed from the flock. It was awful. The families don’t speak anymore. Now she’s pregnant and her father refuses to see her. Can you believe that?”

I stammered that I indeed could not believe it, not quite knowing what to say. Jack went on to describe how Rob’s Jewish wife was now completely disconnected from her family. By his tone, Jack didn’t mean anything directly hostile towards me, but they seemed frighteningly applicable to Jen and me.

There was a new topic in the car: Jews and their separateness. Jen was raised in a New York City suburb next to a very large Jewish community. Jack and Jen began talking about the traits of their Jewish neighbors while I sat as still as a statue in the passenger seat, my secret Jewish identity writhing in pain inside of me.

“These Jews cover the streets in trash. They are just so disgusting, with their long black coats and fur hats, clogging the intersections on Saturday mornings. We have to drive by with you tomorrow, Elliot, just to see the filth of it all.”

What hurt me more than Jack’s anti-Semitic diatribe was Jen agreeing with him.

What hurt me more than Jack’s antisemitic diatribe was Jen agreeing with him. She quickly became the ringleader of the conversation. She was going to be my wife? He was going to be the grandfather of my children? In their eyes, I wasn’t one of those Jews. Waves of nausea pounded my throat as they talked over the silent Jew in the passenger seat.

They continued describing their repulsive Jewish neighbors who were ruining the town. It felt as if I was all alone in the car, watching Jack and Jen laugh and mock from a telescope a million miles away. I had to make a choice: Would I cling to the image I portrayed outside that felt so artificial, or would I decide to redefine myself as the person who I felt I was on the inside?

We finally arrived at the house, Jen and Jack laughing and hugging over a fun night while my mind reeled. We went inside to go to sleep. I tossed and turned all night, mulling over my future and contemplating the difficult choices laid out in front of me.

The next morning I woke up with a cold resolve as to what I must do. I quietly ate breakfast with the family and we headed back to the city. I went back to my apartment and made a plan of what I would say. How I would explain who I was and why I couldn’t reconcile that with the thoughts that had been made clear to me on that car ride.

I showed up at her apartment and asked to speak with her in her room, away from her roommate. I broke the news that she couldn’t move in. That repressed inner personality burst forth like a river through a crack in a dam. I told her about my secret Jewish studies and the fierce connection I felt to the generations of Jews who had suffered so much to carry Judaism forward throughout the years.

It was not easy. Our breakup lasted a month. She told me that she was interested in taking conversion classes. I went to see a therapist who specialized in interfaith couples to see what to do.

During my first session with the therapist, I decided to embrace the real me that wanted to explore my Judaism, to fully realize the person who was being built from within over the past half year. Staying with Jen as she went through a forced conversion borne of antisemitism and a broken relationship sounded like a half measure that would leave me in limbo. I had to commit.

I didn’t reconcile with her. Now I was free to take classes, to check out what Shabbat actually meant. I had time to explore and embark on the journey whose final destination I did not know.

For the first time in my life, I have looked inside and asked myself that most difficult question: “Who am I?” I still don’t fully know the answer but I’m trying very hard to find out. At least my interior matches my exterior.

Elliot Newman, a pseudonym, is presently learning at Aish HaTorah in Jerusalem.

Growing Up Sisters
Don’t Believe in Other Gods Versus God is One
Seeing Without Eyes
Why Shouldn’t We Eat Whatever We Want?
Comments
MOST POPULAR IN Spirituality
Our privacy policy
Aish.com Is Looking for Great Writers