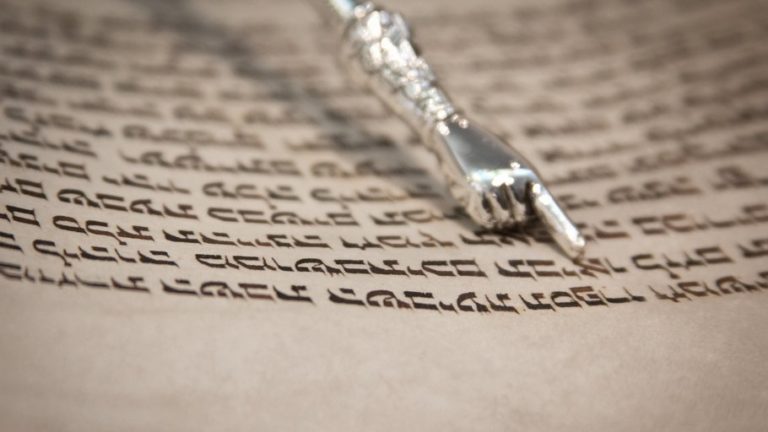 The power of Torah is the influence of the giants of our past to shape the dreams and the aspirations of our future.

“I believe,” Abraham Lincoln famously said, “the Bible is the best gift God has ever given to man.”

Shavuot is the holiday which commemorates the giving of that gift to the Jewish people. According to Jewish tradition, God offered it to all of mankind, but they refused to accept it. They weren’t ready to be bound by its laws or to be guided by its values. So that’s part of the reason why the world is in the shape that it is, still far from having reached its potential for peace, for love, and for messianic fulfillment.

But we, descendants of those who stood at Sinai, made an everlasting commitment to treasure the words of the Torah and to live by its teachings.

The Torah is not merely a book of law. It is also filled with narrative. It is the story of many people, some of whose lives are inspirational – others personifications of deceit and wrongdoing.

The Torah was given primarily not for our information but for our transformation.

No other legal book so artfully mingles laws with stories, rules and regulations with the lives of historic personalities.

Warren Buffett, the brilliant prognosticator of Wall Street, shared a profound prediction beyond the stock market. “Tell me your heroes,” he declared, “and I will tell you how your life will end up.”

According to a remarkable article in Psychology Today, heroes today are almost an extinct species. In a recent poll of more than a thousand Americans, more than half couldn’t name a single public figure that they admired or considered a hero. With great ease they could mention dozens of celebrities. But celebrities aren’t heroes. A celebrity is created by the media; heroes are created by their actions. Celebrities create fashions; heroes create values. Celebrities are only interested in fame and glory; heroes are motivated by morals, by courage and by universal ideals.

In a recent poll, more than half couldn’t name a single public figure that they admired or considered a hero

There is a heavy price to be paid when society turns its celebrities into role models and – perhaps for want of true examples – ignores heroes of character, of virtue and of ethical nobility. The power of Torah on our lives and the lives of our children is the strength of example, the influence of the giants of our past to shape the dreams and the aspirations of our future. The narratives of the Torah are the necessary illustrations for the possibility of its fulfillment.

There’s a famous story told about the Chafetz Chaim, Rabbi Israel Meir Kagan (1838-1933), the Talmudic and rabbinic scholar, ethical and religious teacher, venerated by Jews all over the world for his saintliness and learning. The Chafetz Chaim was called once to testify in court, and the lawyer wanted to explain to the court what an honest man the Rabbi was. He said that once the Chafetz Chaim caught a thief stealing property from his small home. So as not to have the thief be guilty of so heinous a crime condemned in the Ten Commandments, he pursued the thief, shouting, “It’s yours! I forgive you!”

The judge looked at the lawyer and asked if he truly believed this amazing tale. “I’m not certain, your honor,” said the lawyer, “but I do know that they do not tell such stories about you and me.”

The fact is that people did tell many such stories, not only about the Chafetz Chaim but many other pious and holy Jewish figures. That is because those who studied Torah became living exemplars of Torah. Laws became the narratives of their lives. Torah is not a list of do’s and don’ts but a thrilling history of great men and women, of our patriarchs and our matriarchs, of Moses and of Aaron, and of common people who when the world said they can’t, confidently responded that they could – and that they would.

Jews not only have loved Torah since Sinai, they have lived it. Jews have shown it is possible to live life in accord with Divine will, not only studying the Torah but striving to imitate its author.

And that is why we celebrate Shavuot with such fervor and passion. The rabbis have a fascinating image for the moment when we received the greatest gift of history. The midrash tells us God lifted the mountain over our heads. One of the most beautiful interpretations is that the purpose was to create a symbolic chuppah, the bridal canopy used to sanctify a marriage. Sinai was a marriage made in heaven linking us metaphorically to God as husband and wife.

It is a marriage we continue to celebrate every Shavuot. We treasure the Torah He entrusted to us at that time. We thank Him as well for giving us the opportunity to challenge ourselves to live up to our potential for greatness - because that is why we do not lack for role models and magnificent heroes.