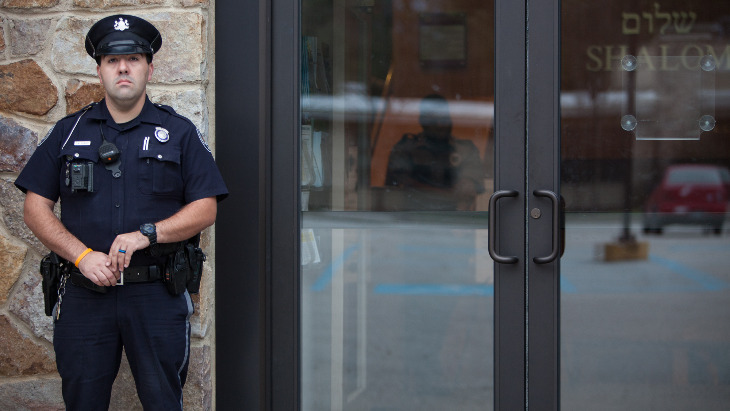 In my wildest imaginings, I never believed that I would march against antisemitism in the United States.

I was five years old when I first heard the bloodcurdling shrieks that split the night and tore through my soul. They came from my parent's bedroom, which I was strictly told never to enter without knocking first.

But I rose from my bed and huddled in a corner nearby, where the screams penetrated me, entering my body like dybbuks.

During the day, my father never mentioned the time he heard 70 of his relatives mowed down by Nazi's bullets (they were hiding in the cellar of a remote farmhouse; he alone had opted for the attic), his solo flight across Europe as a 15-year-old (his father had been sent to Siberia) and his excruciating tenure in the camps.

My father belonged to the group of Holocaust survivors who never shared their narrative with their children, perpetually silent. But at night, his screams told me everything he never wanted me to know, more chillingly than words could ever impart. His screams transformed me, molding me into an activist who participated in rallies against racism and Vietnam.

In my wildest imaginings, I never believed that one day I would march against antisemitism in the United States. But just a few months ago, on Shabbat, two boys wearing kippahs were beaten by three thugs, just blocks from my home, and they required hospitalization. And in July, a Boston Rabbi was stabbed multiple times in front of his synagogue. Just two examples of similar incidences reported all across the nation, in a veritable barrage of antisemitic eruptions.

In my wildest dystopian imaginings, I cannot conceive of concentration camps and mass slaughter in the United States, God forbid. But being verbally harassed, physically assaulted, having our institutions destroyed, and fear permeating our lives on a daily basis represents a huge shift in our American experience.

My father's nightmares emanated from the past. The fears that infuse mine revolve around the present reality and the future.

At night, my husband rouses me from sleep, shaking me softly, whispering, "It's a dream, wake up." Lately I too have begun to scream in my sleep. But not from a dream, as my husband calls it. It's an ongoing nightmare, my father's transmogrified into my own. His tortures, however, emanated from the past. The fears that infuse me today revolve around the present reality and the future.

This Rosh Hashanah, Jews in the United States will be facing scenarios straight out of the European playbook. Armed guards stationed in front of synagogues, "designated shooters" mingling with congregants, newly trained in firearms in a valiant attempt to protect their own. Of course, Covid invites fear and trembling, too, but it is a universal anxiety. The terror invoked by Pittsburgh, Poway, Jersey City, and Monsey is our nightmare alone, intensifying the growing isolation we feel. Never in the history of the United States did we Jews need to summon up the courage to freely worship at our temples and shuls.

Rosh Hashanah is supposed to inspire trepidation, as we appeal to God for merciful judgment. This year, that trepidation will be accentuated by the Jew-hatred that has reached peak levels and doesn't seem to be going away anytime soon.

Yitta Halberstam is the co-author of the 8-volume bestselling series "Small Miracles" There are two million copies in print, with translations in 15 languages. A former adjunct lecturer in holocaust literature at Baruch College, she currently serves as feature editor of AMI Magazine.