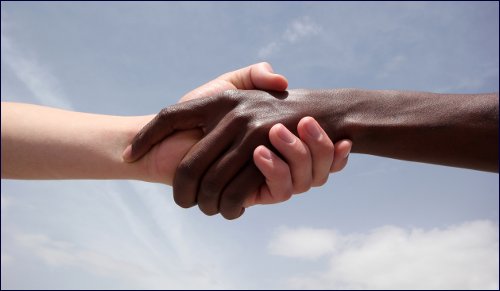 The targeting of our two peoples should impel us to understand just how connected we are.

There is comfort to be taken in some of what emerged from the ugliness of Charlottesville. Despite the horrific events, there is surely solace to be had in the widespread revulsion, for example, that was evoked in so very many Americans, Democrats and Republicans alike, by the marching and chanting white supremacists.

Charlottesville is also an opportunity for something I have long hoped for: a coming together of African Americans and Jews.

As many in our community are fond of saying, America has been good to the Jews. From the smattering of Sephardi Jews who came to these shores in colonial times to the German Jews who followed in the nineteenth century to the Eastern European survivors of the Holocaust, the Jews who arrived on America’s shores all found America to be, truly, a land of opportunity, and many found success in business, professions, academics and other fields. They were, particularly the refugees among them, reborn in their new land.

Black people, by contrast, could never be reborn here in the same way because of how they came here. It’s hard, one imagines, to conjure the image of a goldeneh medina, the “gilded land” that was America to European Jews, while bound in the hold of a slave ship. And while subsequent generations of Jews were able to build on their forebears’ successes, the descendants of American slaves came to be marked not only by the hue of their skin but by the emotional legacy of their ancestors’ experiences.

And so, even after Jim Crow the man, a white entertainer who performed in blackface, had long been buried, and the laws that came to carry his name undermined by the 1964 Civil Rights Act, the psychological legacy of slavery and the persistence of racial discrimination prevented many black people from economic and social advancement. Add the War on Drugs, the prison industrial complex, and the practice of red-lining that banks used to keep African Americans from being able to purchase their homes and climb into the middle class, we have one of America’s worst moral stains, one which persists to this day.

Unfortunately, my community is not free of discrimination. Many Jews, like other white people, tended to look condescendingly on African Americans, and the latter readily reciprocated with resentment. In some cases, that resentment came from the leadership, like Louis Farrakhan and his followers, with their fantasy-fueled hatred. In others, it came from personal and communal tragedies, like the 1991 race riots in Crown Heights.

My personal experience was different, though. I spent my childhood in an observant Jewish home (my father, of blessed memory, was the rabbi of a small Baltimore shul) and a racially mixed neighborhood; one of my best friends was a black boy a bit older than I. Junie and I would play ball and ride our bikes on the rocky hills near where we lived. It was a mixed-race friendship that seems unthinkable in today’s racial climate. In neighborhoods like Crown Heights and Flatbush, you don’t often see African American kids playing with Jewish kids.

Baltimore was very much “the South,” and our domestic help was an African American woman named Lucille Jackson. My mother, of blessed memory, a Polish immigrant, treated her like a part of the family, and Lucille was like a “tante” to me. When she grew too old to do real work, my mother would have her come over all the same to do some dusting, so that Mama could, as always, serve her lunch and pay her wages, as compensation, not charity. That lesson in kavod habriot, “honoring all people,” remains with me to this day.

Then there was Dhanna, the librarian in Providence, Rhode Island, where my wife and I raised our children, who was so kind to them during their frequent visits to the public library, always encouraging them, helping them find what they were looking for and proudly placing the artwork they regularly produced for her on her desk for all to see. And Desi, our own young daughters’ friend, who became quite conversant with the laws of kashrut and Shabbat.

I realize that my personal upbringing and experiences may not have been typical for a haredi Jew. There is distrust, if not disdain, in parts of the haredi world – in fact, in the larger Jewish one, too – for black people. Just as there is animus among some in the African American community for Jews.

I have had unpleasant encounters, too. I won't forget the group of boys who asked my classmates and me if they could join our baseball game. Once their team was at bat, its members decided to turn the Louisville Sluggers on us. No one should ever have to hear the sound of wood hitting skull.

I also won’t forget the “Heil Hitler” that a black teen delighted in shouting at my father and me when we would walk together to shul. Even these days, I come across the occasional anti-Semite of color. One actually greeted me mere months ago on a city bus with a hearty “Heil Hitler!” of his own.

Of course, I have met more than the occasional pale-faced Jew-baiter, too. There are good and bad people in every population, something whose implications we too often overlook. Mindful of the Talmudic imperative to judge “all men favorably” (Avot, 1:6) and my parents’ example, I have never measured any human being by any yardstick other than his own words or deeds, and never prejudged anyone because of his race or the behavior of any of its other members. And my wife and I always sought – and I think successfully – to instill that same attitude in our children.

All the same, in my experience, the arc of the moral universe, to use abolitionist Theodore Parker’s memorable phrase (made famous by Reverend King), has been bending toward justice. While most Orthodox Jews and African Americans tend to live in their own, separate social and cultural milieus, it isn’t unusual anymore to see sincerely friendly interactions between members of the two groups.

It’s not unusual, but it’s also not often enough.

What might hopefully advance that happy development is Charlottesville. The ad promoting the “Unite the Right” rally was designed to evoke a fascist poster, with birds reminiscent of the Nazi eagle soaring through the sky over marchers carrying Confederate flags instead of swastikas.

“White supremacists” was the self-definition of choice among the marchers. And as they marched that Jewish Sabbath night, the torches they carried intentionally evocative of those of Klansmen, they chanted, loudly, lustily, “Jews shall not replace us!” And “Blood and soil!” — an English rendering of the Nazi “blut und boden.”

“This city is run by Jewish communists and criminal n****s,” one demonstrator informed a Vice News reporter.

The time has come, in this post-Charlottesville era, for all Jews and all African Americans to reject generalizations born of the worst examples in the “other’s” community and recognize that the malevolent drawing of a circle around our two peoples should impel us to understand, despite how dissimilar we may be, how joined, in fact, we are.

This article originally appeared in The Forward.

Challenging the UN's Darker Side