I Prayed Alone in a Room for the Hostages in Texas. Over 200 Jews Joined Me 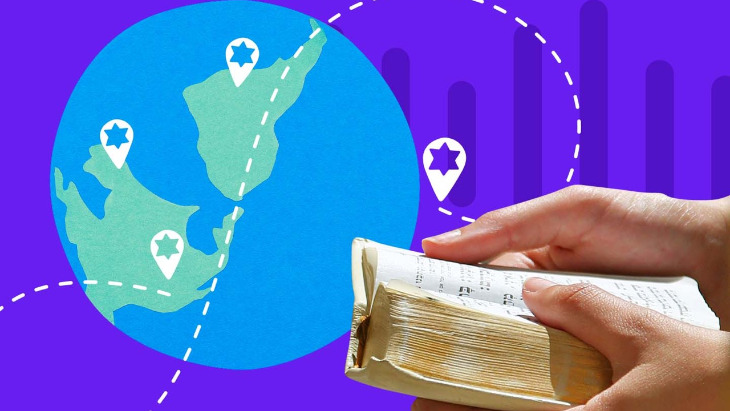 In a polarizing and disconnected world, we found a shared community, reading Psalms together in a Twitter Space.

It wasn’t an easy Saturday night.

After Shabbat, I opened my phone to learn that a gunman had taken four Jews hostage in a Texas synagogue.

The news was disturbing and hit close to home. Earlier on Shabbat, I had prayed in my shul, which had been a victim of multiple acts of vandalism the summer beforehand. Attacks on Jews in the streets and in shuls have continued to increase and as Jews, we’re terrified that we could become the next targets.

That shul could have been ours. And it’s frightening to watch, powerless, as Jews are attacked. As much as we train community members in security protocols and run active shooter drills, there’s almost nothing we can do when something goes wrong across the country or on the other side of the world. Almost.

I felt so distanced from the event, separated by over 1,500 miles, and yet the pain of the Jewish community in Texas was the pain of a Jew anywhere. I wanted to do something and I thought about turning to the book of Psalms, a source of prayers for communities in times of trouble or distress.

But I didn’t just want to pray – I wanted to do something that would also help me feel less alone. I reached out to a friend with a larger platform than I had and asked if he wanted to run a Twitter Space (an audio-only virtual room on Twitter) to host people who wanted to recite Psalms together. He told me he didn’t want to, but he’d promote mine if I opened one up. I didn’t know how else to start praying with other Jews on such short notice. So, I opened a space.

When it feels like there’s nothing to do, we turn to prayer. Please feel free to join this space to say or listen to Tehillim for the active hostage situation in Fort Worth.https://t.co/5AaCZo0JWC

First, I was alone. The app shows you your own profile bubble, the visual of yourself talking, and you can watch yourself talking to nobody. I’ve never felt like I’ve made a huge impact with my social media presence and always worry that nobody’s listening. I wasn’t sure if I should wait or explain what I was doing as one person popped into the space then popped back out. I began to read out loud. I didn’t have a plan. There were 150 psalms to choose from. I read one haltingly. I read another. A couple of people popped in and stayed. I chanted the psalms in the tone of communal prayer. “The Lord will guard you from all evil.” What else could I do but keep going?

I thought I’d read for 10 minutes. Didn’t seem at first like anyone was listening. I tried to pay attention to the couple of people who were present while keeping my place in the Hebrew – bubbles popped in and out and my eyes flitted between siddur and screen. I read the English translation, too, just in case anyone wanted it. Meanwhile, unbeknownst to me, the Space was being shared and retweeted, spreading to Jews I’d never interacted with. Around 30 people had gathered in the space while I wasn’t looking, and someone asked me if they could read Acheinu, a prayer for all the Jewish people in trouble and in need of our prayers.

Suddenly, my messages were being flooded by strangers. “Thank you for your space today. It’s the only thing that made me feel better.” “Gratitude and solidarity from the U.K.”

Then there were over 80 people listening to me. Suddenly, my messages and mentions were being flooded by complete strangers. “Thank you for your space today. It’s the only thing that made me feel better.” “I’m davening with you from Australia. “Gratitude and solidarity from the U.K.” “This was what I needed to find during this horrible, horrible day.” “It was very comforting to be in community.” “I was having a very hard time processing and our communal prayers helped keep me calm and centered.” “I really needed to be with the tribe in prayer and solidarity. Baruch Hashem.”

My throat was getting parched as I continued to read with few breaks, but I had to keep going. In between chapters, I explained why we were praying, what we were praying for. Many verses express hope for vengeance and destruction of our enemies. All we wanted was peace. I kept reading. What else could I do? Over 200 people sat on Twitter, listening, praying, hoping. One woman in Costa Rica read Psalm 27 in English, trying hard to stay composed as she read the words. “Do not hide your face from me… Do not deliver me to the desire of my enemies.” A woman in Canada shared her hopes that our prayers could make a change. A former IDF soldier spoke about the importance of security for Jewish centers.

I watched as Jews of all denominations and degrees of faith came and listened. We were a single body of prayer. I was getting thanks and praise – I could barely accept them. What else could I do but what I had grown up doing? I knew how to read Psalms, I knew how to talk about why what we were doing mattered. But that didn’t make what I did any special. I was nothing without the community that had formed in our Space that night. Without them, I would have been miserable, closing Twitter after 12 minutes of prayers, then opening it again to doomscroll through various accounts of everything we didn’t know.

After two hours of prayer, Jess (the woman from Canada) returned as a speaker to tell us that the hostages were free. I froze. I said, “Let’s make sure the information is accurate and keep praying while we wait.” I got more messages, as tweets from journalists and government officials confirmed that our prayers had been heard. It seemed impossible that we could ask for something and be answered so quickly – not that I didn’t believe in God; I didn’t believe in myself. And yet, there we were.

It wasn’t an easy Saturday night, but we had each other.

”We can’t just pray for the bad,” I said, “we also have to pray for the good.” I read the four verses of Psalm 100, which begin, “A psalm of thanksgiving. Make a joyful noise to the Lord, all of the earth.” Someone else sang the words of Havdallah, the service of the conclusion of Shabbat. “The Jews had light and gladness, joy and honor. So may it be with us.”

In the aftermath, I continued to get some messages from people who were impacted by the shared experience. It wasn’t an easy Saturday night, but we had each other. I thought I was going to be alone with my fears and my hopes and a couple of prayers. I imagine others in the group thought the same. Many people thanked me for leading prayers. I’m thankful for every one of them – a discovered community that came together in darkness and shone a light on the fact that we’re not alone.

I hope we can continue to find community between all Jews, no matter how distant or different – and I pray we won’t need another tragedy to get there.

Tell Me Who Are the Jews Or Die

My Quest For Understanding: Confronting My Family's Nazi Past