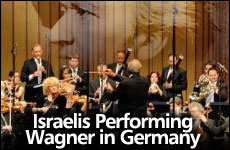 The Israel Chamber Orchestra on Tuesday performed Wagner's opera Siegfried Idyll at the Bayreuth Opera Festival. It was the first time an Israeli orchestra had played Wagner in Germany.

The conductor, Roberto Paternostro, whose mother and other relatives were Holocaust survivors, agreed that "Wagner's ideology and anti-Semitism were terrible, but he was a great composer." He opined that Wagner's worldview should be treated separately from his music. Paternostro conceded that not enough time had passed for Wagner to be played in Israel, but felt it was appropriate to do so in Germany. "The aim in the year 2011 is to divide the man from his art."

The orchestra's chief executive, Erwin Herskovits, went further, telling Reuters that "there is great pride and excitement... This is not just another concert. It is a once-in-a-lifetime concert." With works from Jewish composers Gustav Mahler and Felix Mendelssohn (banned by the Nazis) also being played, he said that "it was like a mission to be here playing Jewish music by Jewish musicians from the Jewish state... It was a victory concert."

Wagner was a central pillar in the anti-Semitic character of Nazism.

But Wagner's history cannot be so summarily dismissed. He was a central pillar in the anti-Semitic character of Nazism. In fact, Wagner even coined the terms "Jewish problem" and "final solution," which subsequently became central to the Nazi vocabulary.

In his notorious essay titled "Judaism in Music," first published in 1851, Wagner expressed his extreme revulsion for what he described as "cursed Jewish scum" and declared that the "only thing [that] can redeem you [the Jewish people] from the burden of your curse [is] the redemption of Ahasverus - total destruction" - a code term for expelling Jews from society. In this essay, Wagner described Jews as "hostile to European civilization" and "ruling the world through money." He argued that "Judaism is rotten at the core, and is a religion of hatred," describing the cultured Jew as "the most heartless of all human beings" and referring to Jewish composers as "comparable to worms feeding on the body of art."

Wagner's family continued to promote his vile anti-Semitic ideology. His daughter Eva married Houston Chamberlain, an Englishman who crafted the ideology for Nazi racism in his notorious book, The Foundations of the Nineteenth Century. After his death, Wagner's family became a central attraction for radical right-wing Germans.

Although Wagner died 50 years before the Nazis came to power, Hitler venerated him, proclaiming that "whoever wants to understand National Socialist Germany must know Wagner." He was so enraptured with him that he is quoted as having said, "Richard Wagner is my religion."

Hitler also became a friend of Wagner's son Siegfried. After Sigfried's death in 1930, Hitler remained very close to his English-born widow Winifred, a passionate Nazi and anti-Semite who had befriended him early in his career.

Wagner's great-grandson Gottfried visited Israel in 1996, giving lectures condemning his great grandfather's obsessive hatred of Jews, stressing that Wagner's anti-Semitic views were far more important to him than his music. Gottfried was regarded as the black sheep of the family, which disowned him, and he came under attack from neo-Nazi groups.

For Jews, and in particular for survivors, Wagner is not just another anti-Semite. He is bracketed with Nazism, and can be said to have been a forerunner of those who paved the way for the Holocaust. On top of this, Bayreuth, the location of the festival, was renowned as a center for Nazi "cultural" activity.

Under such circumstances, it is surely shameful for an Israeli chamber orchestra, perceived to be representative of the Jewish people, to be linked to such an evil person.

It truly requires a person to act in a schizophrenic manner to say that they can enjoy this man's music and close their eyes to his evil actions. But even more so, the heartlessness of Israelis ignoring the sensitivities of Holocaust survivors represents a stain on our dignity and national identity.

Elan Steinberg, vice president of the American Gathering of Holocaust Survivors and their Descendants, accused the Israeli orchestra leaders of being "tone deaf." He condemned the performance as "a disgraceful abandonment of solidarity with those who suffered unspeakable horrors by the purveyors of Wagner's banner."

For the Israeli Chamber Orchestra to have actually gone to Germany to perform his works in Bayreuth, where he was glorified by the Nazis, is truly a national disgrace.

Let us know what you think in the comment section below.