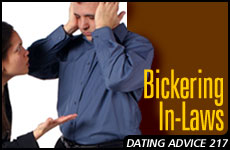 His family is argumentative, arrogant and controlling. Should she be worried?

I am 24 and have been dating a man for two years. I really believe he is the one for me and he has already asked me to marry him.

My problem is that I really am uncomfortable around his immediate family (siblings and parents). They are very nice to me, but "drive me crazy." For example, when I am at his parents' home, they are constantly bickering. His mom is compulsively neat, and everything has to be "just so." Once I brought in a little dirt on my feet to the floor and she freaked out. I cringe at the thought of planning a wedding because of her need to be in control.

His dad is a "show off," constantly talking about himself. He tries to impress people with his experiences, finances, travels, etc. His sister moved a long distance from her parents. She and her parents constantly argue when they are together, and she isn't respectful to her mother or her grandparents.

Needless to say, my own family is very different than this. I don't see my fiance's family too often, because they live in a different state. But nevertheless I am worried. Why am I so uncomfortable around his family? I can't see breaking off our engagement just because of his family. Do you have any suggestions? Thanks!

Many people have difficulty getting accustomed to the relatives of the person they're dating, particularly if that family's way of interacting is very different from the manner in which they were raised. It sounds as if your family is more even-tempered and toned down than your fiance's family, and it's easy to see that a family that interacts through bickering, arguing, and criticizing can be unnerving and intimidating to you.

The fact that your fiance's parents bicker a lot doesn't mean they don't love each other. In fact, Dr. John Gottman, a psychologist who has studied married couples for more than 30 years, observes that bickering is not necessarily an unhealthy way for a couple to interact. Bickering that is unaccompanied by sarcasm or contempt may be the way this couple solves problems. That doesn't mean that bickering is ideal, but understanding Gottman's observations can help you put this family's interactions into perspective.

You can take a great deal of comfort in a very positive aspect to your situation -- the fact that your fiance's family is, as you write, "very nice" to you. It seems that they like you and accept you. Many people are not that fortunate. Try to appreciate this aspect of your relationship with them and use it as a starting point to find qualities that you can learn to like about them. If you see them in a more balanced way, it will help you to accept them as people who have some likeable features and some that drive you crazy, but who care about your future husband and who want the best for the two of you.

The distance between you and your fiance's family will certainly make this adjustment easier because you can interact with them in small and not-too-frequent "doses." Knowing that you'll only be together for a weekend, or a few days, is a good coping mechanism and can help you have a more positive relationship than if you lived close by and saw each other often. If you are together for more than a day or two at a time, it may also help to schedule some respite time away from the family during that visit, such as a walk or drive with your husband for a few hours.

There is one thing that you didn't say in your letter that we'd like to inquire about. Could it be that one of the reasons you are uncomfortable about the way his family interacts is that you're concerned he may engage in those same behaviors once you are married? That's a legitimate concern, but deserves an explanation. Sometimes, people are able to make a conscious effort to avoid imitating many of the negative patterns of behavior they observed in their families when they were growing up. Other times, they unconsciously emulate into other negative patterns of behavior; however, once they become aware of them they can learn to change if they are motivated to do so. They may benefit from a third party's help to learn more positive ways of interacting.

It could be that your fiance also dislikes the bickering and criticism he sees in his family and tries to act differently than they do. He may have chosen to live a distance from them so that he doesn't have to be exposed to these negative interactions too often. Has he discussed this with you? If not, you'll probably want to talk about your concerns with him. We suggest that you do so in a way that isn't confrontational. After all, he loves his family in spite of their faults, and he can't change them.

One way to introduce the subject is to ask him what he admires about the way his family interacts, and what he dislikes and does not want to see in his own future family. This can lead to a discussion about the qualities you like about his family, and those that you hope will not be part of your own marriage.

You've also expressed some concern about his mother's controlling tendencies. There may be a big difference between her desire to keep everything in order in her own home, and whether she feels a need to control other situations. She may not. You've been dating her son for long enough to get a sense of whether she tries to control certain aspects of his life, and how he reacts to her. If you see specific signs of a potential problem, you should discuss your concerns about wedding plans with him. There are many ways to resolve potential conflicts of will, but each solution shares one element -- that the couple agrees to present a united and mutually supportive front.

We hope our advice is helpful.

Dating Maze #232 - Cross-Cultural Dating
Blessing on Chewing Gum
Was Rahab a Prostitute?
Extras In Our Own Epic
Comments
MOST POPULAR IN Dating
Our privacy policy