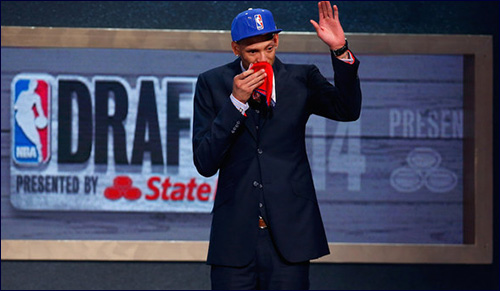 A devastating medical diagnosis produces a double-dose of inspiration.

By age 3, Isaiah Austin had already attended basketball camp and could dribble between his legs. Despite being blind in one eye and lacking depth perception, Austin worked tirelessly in pursuit of his lifelong dream: playing in the NBA.

The 7-foot Baylor University center, described as having "limitless potential that inspires daydreams," was projected to be top-round pick in this year's NBA draft.

Yet four days before the draft, the results of a blood test showed that Austin has Marfan syndrome, a rare genetic disorder that affects the connective tissue. High-level physical exertion could rupture his heart.

What happened next was truly inspiring:

NBA Commissioner Adam Silver, with great compassion and kindness, invited Austin to attend the high-profile NBA draft event, then fulfilled one part of the dream by ceremoniously "drafting" Austin in the first round.

But what Austin did is most remarkable of all. Calling his reversal of fortune an opportunity for a "new beginning," Austin tweeted:

Austin promptly created a “Dream Again” campaign to support the Marfan Foundation, and is spreading the message of not taking anything for granted.

Many people talk about "having faith," but one never knows until they are tested at the core. This week, Isaiah Austin showed that he walks the walk.

"I have a whole life ahead of me," he said. “When one door closes, God opens another."