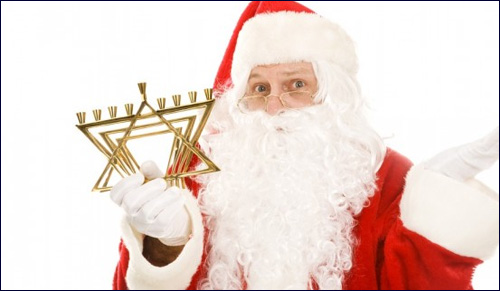 The greatest challenge to our faith is not another faith, but faithlessness.

My parents told me many times how much they dreaded the Christmas season.

Living in a little shtetl in Poland, they knew what to expect. The local parish priest would deliver his sermon filled with invectives against the Jews who were pronounced guilty of the crime of deicide, responsible for the brutal crucifixion of their god and therefore richly deserving whatever punishment might be meted out against them.

No surprise then that the Christian time of joy meant just the opposite to the neighboring Jews. The days supposedly meant to be dedicated to “goodwill to all” were far too often filled with pogroms, beatings, and violent anti-Semitic demonstrations.

Thankfully, those days are long gone. America is a land that preaches religious tolerance both by law and by culture. Christians and Jews are respectful of each other's religions, and while every so often an isolated incident may mar friendly relations between these faiths, we have in the main learned how to get along in a pluralistic society.

Due to the vagaries of the Hebrew calendar, Christmas and Chanukah may coincide or appear in a variety of different permutations, but almost always they find Christians and Jews both celebrating their respective traditions in December.

Today’s assault is on our eardrums, forced to endure the seemingly endless Christmas songs.

And that “calendar conflict” seems to bother some Jews. Of course our problem with Christmas is nothing like the one that afflicted my parents in Poland. The only way we are assaulted today is by way of our eardrums, forced to endure the seemingly endless carols and Christmas songs that have become standard fare for this season. There are no attempts at forced conversions. No one makes us put up a miniature replica of the Rockefeller Center tree in our living rooms. No one beats us up because we choose not to greet others with a cheerful “Merry Christmas.” But still…

I hear it all the time. Jews verbalizing their displeasure with public displays of Christian observance. Jews worried that somehow a department store Santa Claus will defile their own children. Jews in the forefront of those protesting any and every expression of religiosity coming from those with a different belief system than ours. Christmas, they claim, is by definition a threat to Judaism and to the Jewish people.

And I believe they are mistaken.

Yes, America was wise enough to posit the separation between church and state. We know the danger of governments favoring one religion over another. But the intent of the Founding Fathers was never to negate the importance of any religion. The United States identifies itself as “one nation under God.” Belief in a higher power has been the source of our divine blessing. And as Jews I think we ought to recognize that today the greatest challenge to our faith is not another faith, but faithlessness. Our greatest fear should not be those who worship in a different way but those who mockingly reject the very idea of worship to a higher power.

Our children today are threatened by the spirit of secularism more than by songs dedicated to proclaiming a holy night. We live in an age in which Christopher Hitchens can find millions of dedicated readers devouring his best-selling works, God Is Not Great: How Religion Poisons Everything, as well as The Portable Atheist: Essential Reading for the Nonbeliever.

Living among Christians who demonstrate commitment to their religious beliefs to my mind is a far better example to my coreligionists than a secular lifestyle determined solely by hedonistic choices.

Surrounded by Christmas celebrations, I have never had difficulty explaining to my children and my students that although we share with Christians a belief in God we go our separate ways in observance. They are a religion of creed and we are a religion of deed. They believe God became man. We believe man must strive to become more and more like God.

We differ in countless ways. Yet Christmas allows us to remember that we are not alone in our recognition of the Creator of the universe. We have faith in a higher power.

Wondering why we don't celebrate Christmas is the first step on the road to Jewish self-awareness.

To be perfectly honest, Christmas season in America has been responsible for some very positive Jewish results. This is the time when many Jews, by dint of their neighbors’ concern with their religion, are motivated to ask themselves what they know of their own. To begin to wonder why we don't celebrate Christmas is to take the first step on the road to Jewish self-awareness.

My parents were "reminded" of being Jewish through the force of violence. Our reminders are much more subtle, yet present nonetheless. And when Jews take the trouble to look for the Jewish alternative to Christmas and perhaps for the first time discover the beautiful messages of Chanukah and of Judaism, their forced encounter with the holiday of another faith may end up granting them the holiness of a Jewish holiday of their own.

So this Christmas, pick up a good Jewish book or attend a Jewish seminar. Or check out my online course, Deed and Creed at JewishPathways.com, which explores the key philosophical differences between Judaism and Christianity.

Call me naïve, but nowadays I really love this season. Because together all people of goodwill are joined in the task to place the sacred above the profane.

Related Article: What Am I Doing for Christmas?

Teaching the Holocaust to Our Children
For Every Individual, A Torah Scroll
Allegiance To The Monarch
Meet the Real You: Yom Kippur
Comments
MOST POPULAR IN Israel
Our privacy policy
Aish.com Is Looking for Great Writers