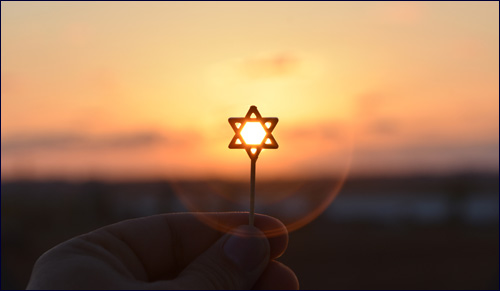 Jews are the most rewarded and most punished people in the history of the world.

I spent my professional career working at Psychological Services and Counseling at San Diego State University. Over the years we had regular staff trainings that included the need to better understand our increasingly diverse student population. As a Jew who was starting to appreciate more about our heritage, I was frustrated that Jews didn't seem to qualify as a minority or a persecuted one at that. I was told that since we were white and, for the most part, very successful in America it was fitting to be lumped in with the white majority. So I came up with my own presentation that would help my colleagues realize that we Jews have a unique culture of our own that a lot of people might not be aware of.

Who are the Jews? We are the sons and daughters born of Jewish mothers and the righteous converts throughout the course of Jewish history. We are the descendants of Avraham Avinu (Patriarch Abraham), the discoverer of monotheism, an idol smasher of the first degree. We carry on his tradition to this day: we have a keen eye and ear for falsehood and injustice; we are often in the forefront of social causes and revolutions. We make good lawyers, psychologists, social workers, and teachers.

We are a spiritual people with intense spiritual needs. We need not take credit for that – we were designed that way in the factory for our life’s task. We go through life as seekers, often not realizing what we seek. If we do not fill our spiritual void with our own spiritual traditions, we will seek out just about anything else to fill it. We are wildly over-represented in cults and religious fringe movements, psychology, and politics.

We are a spiritual people – a spiritually hungry people, a spiritually forgetful people. We are messengers who have forgotten the message. We are in exile and sometimes we don’t even know it. Our alphabet goes from right to left. Our calendar is lunar, not solar. We feel alienated but don’t know why. We are the epitome of “strangers in a strange land.” The lands of our dispersion keep changing, but our sense of alienation never does – at least not while we are in exile – away from our land and in spiritual shambles. On the Seder night we ask “Why is this night different from all other nights?” But we mean “Why is this exile different from all other exiles?”

We are “show and tell” – across the stage of history.

Who are the Jews? We are “show and tell” – across the stage of history. We are a demo in the classroom of life. We are the most rewarded and most punished people in the history of the world. We are given the mandate to be a separate and distinct people – a holy people, an ethical people. When we blow it, we are usually spectacular. If we don’t remind ourselves who we really are and keep to our traditions, we are usually reminded by the other nations of the world. The Spanish Inquisition and the Holocaust might be the best-known examples of these reminders.

Our periods of greatest acceptance and assimilation have usually been followed by suffering, bloodshed, and dispersion. Our lives in America are terrific right now and that itself is cause for alarm to the spiritually sensitive. We feel free so maybe we ought to think about leaving while we still can.

On the other hand, we still exist, and that alone should be an awe-inspiring thought to Jew and gentile alike. We could not possibly have continued to exist because of our military might or our popularity with the other nations of the world. Our ambivalence towards our own spiritual traditions should have done us in ages ago. Our existence is truly miraculous, and our existence in our Jewish homeland after thousands of years of dispersion should certainly give us some food for thought.

Who are the Jews? We are the character analysts of history, the ancient psychologists, the custodians of wisdom. For centuries, the greatest Jewish sages analyzed the actions and language of Torah personalities and biblical figures in order to determine just what it was that we were supposed to be learning from a particular story, event, or character. We were given the clues, traditions, and structures to make this endeavor possible. It’s in the Talmud – accessible, but largely unknown to today’s psychologists.

We have a tradition of mussar – most Jews have never heard the word. It deals with man’s capacity to rationalize. It deals with keeping ourselves honest and enabling us to get unstuck and grow. It is a rich tradition. We say we want to know about character development, but we look every place else for our answers. This is extremely sophisticated stuff, right from the source. We don’t like to hear this, but let it be said that psychology has always had very little respect for its elders. We always like to know what’s new and not necessarily what’s true.

Psychology and counseling have borrowed tremendously from these sources and we don’t always give credit where credit is due.

But, unbeknownst to most of us, psychology and counseling have borrowed tremendously from these sources and we don’t always give credit where credit is due. Therapy is most comfortable as a humanistic, values-neutral undertaking, and religion and spirituality are often characterized as judgmental and superstitious.

Our profession itself stems largely from Freud and other early psychoanalysts. Yet, for the most part, these were disgruntled, irreligious Jews who were exceptionally unspiritual in their outlook. Freud borrowed heavily from Jewish mysticism, even if he failed to acknowledge it. We have an ancient tradition of character analysis, character development, and dream analysis beginning with Joseph in ancient Egypt. We are an overlooked source for most of the truly useful measures of human growth. We waited for Jung, a gentile, to respond to our need for the missing spiritual piece we had all been hungering for. As Jews, we may have a tradition of wisdom and truth, but as Jewish psychologists we tended to associate this tradition with superstition and the loss of individual freedom.

Who are the Jews? The Talmud tells us that we have three distinguishable qualities or character traits – compassion for our fellow man, a love of kindness and good deeds, and a sense of modesty or humility. We are told that we don’t have a monopoly on these characteristics, but if we see these qualities lacking in a Jew we might question his lineage. Sadly, our public image these days doesn’t necessarily reflect these three qualities. Some of this has to do with the nature of anti-Semitism. Some of it, however, has to do with the fact that we have simply dropped the ball ourselves. We have not always been inspiring examples.

Our ranks are filled with lawyers, doctors and Nobel Prize winners, but we’re like ignorant kindergarteners when it comes to our knowledge about Judaism.

A basic Jewish teaching is that an ignoramus cannot be a righteous person. It takes intense study, discipline, and practice. It is a lifetime endeavor. We can’t just adopt an attitude or practice some breathing exercises. It’s hard work and, for the most part, it can be unappealing when we look at it from the outside. Why, we may ask, would we want to cramp our style? After all, people are people, aren’t they?

We have a whole tradition relating to self-esteem. We are told to keep two pieces of paper in our pocket to be used for different occasions. When we are feeling down and discouraged about ourselves, we should pull out the one that reads, “For you the entire world has been created.” But when we are feeling too arrogant or prideful, we can pull out the one that says, “Even the lowly gnat was created before you.”

This is the Jewish teaching that should guide all of us: Seek balance, moderation, a sense of awe about life itself, above all, an appreciation for the Divine essence deep within that complex human being that sits across from you as your client. Recognize that your clients have been sent here to grow.

Excerpted from No Stories to Tell: The Psychologist Meets Infinity, by Steve Sherr. Click here to order.