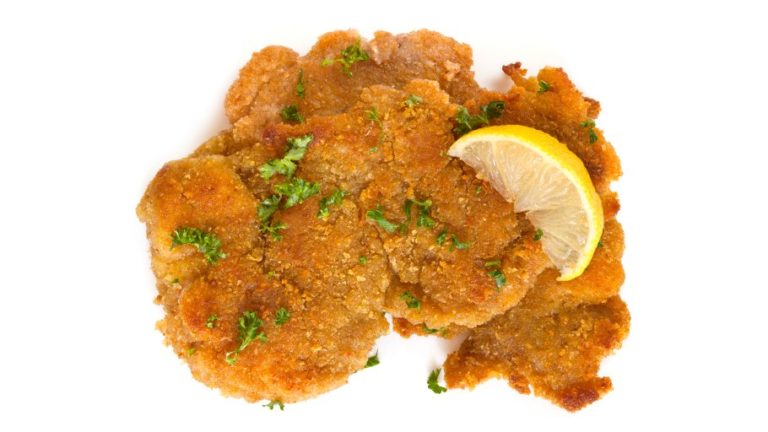 According to schnitzologists there are many reasons for the strong Jewish connection to schnitzel.

Schnitzel is not uniquely Jewish yet it is beloved by many Jews. The question is: why? According to most experts, including several top schnitzologists, schnitzelticians and schnitzographers, there are many possible reasons for the strong Jewish connection to schnitzel.

First, schnitzel, a German word, arguably has a Jewish-sounding (or at least a Yiddish-sounding) name. The “sch” prefix is in the same ballpark as the “sch” prefix of other classic Jewish/Yiddish words like schmaltz and schmutz. At the same time, the “el” suffix is similar to that found at the end of words like kugel and kichel. If your last name is Schnitzel, that certainly does not mean you are Jewish, but it does mean you should marry someone with the last name of Weiner: "You are cordially invited to the Weiner-Schnitzel wedding."

"You are cordially invited to the Weiner-Schnitzel wedding."

Second, from an onomatopoeia perspective, the pronunciation of schnitzel reminds us that it is fried in sizzling (“schni”) and crackling (“tzel”) oil. (There are other words in Jewish/Yiddish parlance that have a similar onomatopoeic effect like schlep and schmooze.) The fact that schnitzel is fried in oil means that it is similar to classic Jewish treats such as latkes and sufganiyot (jelly doughnuts), both of which are intended to remind us of the Miracle of Chanukah and the little bit of oil that burned for eight straight nights. Since latkes and sufganiyot are not normally consumed year-round, the oily schnitzel arguably serves as a more constant and filling reminder of the Chanukah miracle.

Third, schnitzel is breaded and many Jews love bread (see, bagels, bialys, pita and challah for further details). In fact, many Jews prefer food when it includes or incorporates bread. In other words, lox is good but lox on a bagel is better. Eggs are good but french toast is better. Pudding is good but bread pudding is better. Perhaps the Jewish love affair with bread is because it reminds us of the manna in the dessert. This, of course, raises a question as to whether heavily-breaded schnitzel requires a "hamotzi” bracha. Don’t worry, according to most scholars, the answer is: no.

Fourth, schnitzel perfectly stabilizes a sandwich like a real mensch. It fills the middle gap with gusto and bravely withstands condiment smothering, soaking up the excess without becoming overwhelmed. It graciously shares space with lettuce, tomato and other accoutrements, snuggly greeting them with a warm but not oppressive embrace. In other words, when the flaming hot schnitzel collides with the tomato, it does not instantly reduce the tomato into ketchup.

Fifth, anything can be schnitzel. Yes, chicken, turkey and veal are the most common varieties but other things can be breaded and fried. In the south, chicken fried steak is popular and that dish essentially is beef schnitzel. Many scholars agree that chicken fried steak, like many wonderful things in life, was discovered by accident. As the story goes, in the early 1900’s an too-eager-to-please line cook mistakenly combined two orders, one for chicken and the other for fried steak, hoping to satisfy what he thought was a peculiar request. (Yes, peanut butter and jelly sandwiches likely have a similar “oops!” origin.)

Sixth, schnitzel goes swimmingly with nearly anything and is very flexible. In fact, many restaurants bestow special names on wacky schnitzel creations. In that vein, here are suggestions for some new customized schnitzel sandwiches:

(1) The "Klutz": Served in bubble wrap because it definitely will wind up on the floor.

(2) The "Kvetch": No matter how well you prepare it or how good it tastes, there still will be a litany of complaints.

(3) The "Pushy Panko": served to those shopping in Machane Yehuda on a busy Friday morning and who must aggressively navigate the crowds with a certain amount of non-violent chutzpah.

(4) The "Plotz": this sandwich is so shockingly good that you aren't going to believe it. After just one bite, “you're gonna plotz.”

(5) The "Chelm Special": a cockamamie sandwich featuring a fried loaf of bread covered in chicken crumbs.

(7) The "Jewish Mother": served in Tupperware so that you can take the leftovers back with you to share with your roommates.

(8) The "Mezuzah": It's so delicious that you'll want to hang one in every room of your house.

Confessions of a Jewish Food Hoarder

Murphosky's Law
Bechukotai 5782: Divine Retribution
Behar 5782: Working to Live or Living to Work?
The Wholeness of Being Broken
Comments
MOST POPULAR IN Funny Stuff
Our privacy policy