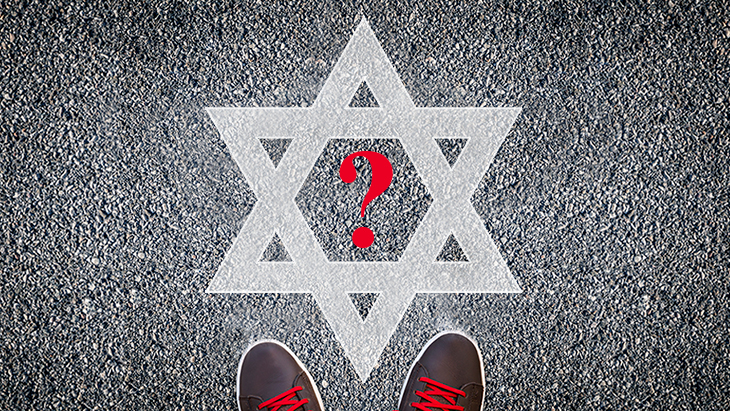 This theoretical question was posed to me when I was a teen. Weeks later, it became my reality.

With a booming voice, the NCSY counselor stood on a table on a Friday night and asked the entire room of 200 students, “What would you do if, right now, I told you that you were not really a Jew?”

As a smug teenager, I stood up in front of the entire room and shouted, “I’d go eat a cheeseburger!”

Probably not the answer he was looking for.

At the time, Judaism felt like a burden. Most of my friends weren’t observant. A few years before, my family had decided to become Orthodox, and initially I happily went along with it. In the beginning, I only saw the perks—we had two houses, one in our W.A.S.P.-y area of town and a second home in the Orthodox community that we went to for Shabbat. I had double the amount of friends—a set of school friends and a group of synagogue friends. I got more undivided time with my parents—we would spend Shabbat playing board games and relaxing as a family. What wasn’t there to like?

But as my teenage years crept up on me, the stark difference between me and my school friends became more apparent. While all my friends sat in a hamburger joint enjoying non-kosher food, I'd slowly drink a lame Sprite. When all my friends went out Friday night, I was stuck home singing Shalom Aleichem before dinner.

The joys of observing Judaism were dissipating while the burden seem to be increasing.

The joys of observing Judaism were dissipating while the burden seem to be increasing. At that point, if someone were to tell me I wasn’t Jewish, that would have been just fine with me!

Two weeks after that NCSY spectacle, it actually happened to me; I found out I wasn’t born Jewish.

I was sixteen years old. A friend was over at my house working on an English project. We were mostly wasting time, but finally cranked it out and printed what we wrote. We got distracted and eventually realized that we had “lost” the paper. Looking all over the house I finally found the papers turned over in the corner of the room.

“Here it is!” I told my friend and started reading.

I began to read what seemed like a term paper my sister had written for college. It had corrections all over it in red ink.

As I started reading her essay, I realized it was a fictional piece she had written pretending to be a convert. My mother is a convert so I assumed that she used that as inspiration to create her own storyline.

As I continued reading, it became apparent that it wasn’t fictional at all. She shared specific dates, names of rabbis, the name of the congregation we belong to, and the mikvah. My eyes were popping as I realized my sister was a convert.

The logical conclusion was that if my sister had to convert, and I never did, then I must not be Jewish!

“MOM! DAD!” I called out, running towards their room. I shoved my sister's essay into their hands and said, “What is this?! Why didn’t you tell me I’m not Jewish?!”

The night was long. My friend went home and there were tears and a myriad of explanations, and I was left alone in my room to reflect.

Instead of running out to eat a cheeseburger, I felt like everything was pulled away from me.

I couldn't believe this was happening to me. Instead of being overjoyed and running out to eat a cheeseburger, I felt like everything was pulled away from me – my identity, my Judaism. The sacrifices I made for keeping kosher and observing Shabbat felt worthless now. I didn’t say Shema that night thinking that God didn’t want my prayers.

I felt completely alone in my struggle. I felt betrayed by my parents, by my siblings, and by God. In the already fragile experience as a teen, my very core was shaken. Who am I? Where do I fit in? The questions poured in and I had no satisfying answers.

That sudden discovery sparked a long journey, one that continues to this day.

My parents explained that when they became observant there were questions surrounding my mother’s initial conversion. As a matter of pure precaution and to avoid any doubt, my entire family, including me, underwent an Orthodox conversion. This was a grueling process for them, but relatively simple for me. I was a baby at the time of the “re-conversion” and was only required to go to the mikvah, but would need to reaffirm my devotion to Judaism as an adult.

Although I did not need to officially convert according to Jewish law, I did need to undergo a transformation with respect to my relationship to Judaism. I had to make a choice: either I was going to go for the secular lifestyle I thought I was missing out on or I was going to start understanding the depth behind being Jewish. Every day I am reaffirming my dedication to Judaism, a process I hope will last a lifetime.

When I felt my Judaism was being taken away from me, I found myself fighting for it. I no longer wanted to take being Jewish for granted. And I certainly didn’t want to continue observing mitzvot mechanically. Surprisingly, this experience was a gift, a wake up call inviting me to deepen my relationship with God.

After high school, I travelled to Israel to immerse myself in Torah learning. I learned that every letter of the Torah has significance and depth. I began to glimpse how the Torah is an infinite, perfect puzzle, where every piece and topic connects to another. Far from being a burden, I embraced the responsibility and privilege to strengthen and deepen my relationship with God through the Torah's commandments.

The more I learned, the more passionate I became. My experience was the catalyst for my personal “conversion” and renewal of my relationship to Judaism.

I wish I could turn back the hands in time and answer that NCSY counselor differently. Today I would reply: “If someone told me I wasn’t actually Jewish, I would choose to convert. I now understand what a privilege it is to be Jewish and to be part of an eternal chain connecting all the way back to Mount Sinai. I relish in the meaning and purpose Judaism brings to my life and am forever grateful and proud to be part of this magnificent nation that has brought timeless values and wisdom to the world. I wouldn't give that up for anything.

Loving the Father I Hate

I Believe in You: Inspiring Rosh Hashanah Message

From Christian Missionary to Observant Jew
The Sin of Moses: The Two Ways to Communicate
In Aftermath of Chicago’s July 4th Shooting, Local Moms Provide Countless Points of Light
Baked Burik Recipe
Comments
MOST POPULAR IN Spirituality
Our privacy policy

The Sin of Moses: The Two Ways to Communicate
In Aftermath of Chicago’s July 4th Shooting, Local Moms Provide Countless Points of Light
Baked Burik Recipe
Blocked Goals and Anger
Why the Mezuzah is Placed on a Slant
Faith: the Axis Upon Which the Wheel of Science Turns
Love - Not Just About Chemicals Anymore!
Is There a Moral Code in a Virtual World?
Why Parents Enjoy Mercilessly Judging Other Parents
History of the Swastika: 6 Facts
1 2 3 … 2,887 Next »