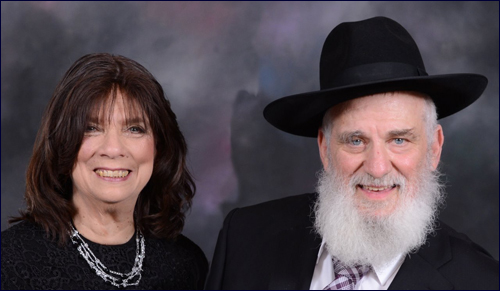 In memory of Rabbi Dovid Heller, of blessed memory.

I went to a number of different classes searching for answers. But I was rapidly becoming frustrated because I couldn't seem to relate to any of the lectures. Having just graduated from the University of Pennsylvania, I was bored and unconvinced in every class that I found, even though I desperately wanted to absorb all the beautiful ideas and values. And then I walked into Rebbetzin Heller's class. 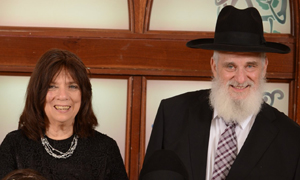 I was late and tried to slide inconspicuously into a seat in the back, but she looked up at me and stopped speaking for a second. "Welcome," she said, giving me her signature smile with her sea green eyes lighting up with warmth. And then she continued to teach. It took me about five minutes to realize how brilliant the Rebbetzin was. And it wasn't just the depth of her wisdom; her values were authentic and strong. Sometimes she would be telling a story about some person who performed an incredible act of kindness and her eyes would fill up with tears that she never let flow.

I followed her from class to class like a parched wanderer desperate for water. I asked hundreds of questions; she encouraged me and answered me with endless patience and attention. In those first hard months, she gave me strength when mine was gone. She gave me vision when I couldn't see beyond today. She gave me content when I was stuck on the surfaces.

Rebbetzin Heller's words cut through all of my excuses and poured into my soul.

And I remember one stunning, Jerusalem morning, sitting in the second row, when her words pierced my heart. At the time my husband and I were struggling with whether we should start a family; I wasn't sure if I wanted children yet. Rebbetzin Heller's words that day, which I afterwards reviewed in one of her books, Our Bodies, Our Souls, cut through all of my excuses and poured into my soul: "While one can give to society in innumerable ways, bringing new humans into existence and imbuing them with spiritual values ensures the perpetuation of everything that makes life worth living. It is the most fundamental contribution one can make to the world."

Until then I had thought that the most significant contribution I could make to the world would be through my career. I had defined myself and my goals in terms of how successful I was professionally. Within that framework, children would only get in the way and make life harder. But I walked out of that class and thought about the Rebbetzin's words. What really made life worth living? Later that afternoon I read further: "The Hebrew word for children, banim, comes from the same root as the verb banah, build. Mothering allows a woman to directly and experientially address the aspects of herself that are most Godly and thus build herself... Religious Jews value souls coming into the world both for the good of each soul (which now has the opportunity to rectify and perfect itself) and for the fulfillment of the mission of the Jewish people, to which each soul is expected to contribute." (Our Bodies, Our Souls, 134-135)

I wanted that kind of greatness; I wanted to build. I wanted everything that ultimately makes life worth living. And if someone like Rebbetzin Heller could raise 14 children and become the Torah powerhouse that she is today, then perhaps the ideas that I previously had about motherhood needed some amending. That’s how Rebbetzin Heller inspired us to have our first child.

But it didn't end there. Throughout the following years as we were blessed with more children and I was working to complete my Master’s degree, I ran to Rebbetzin Heller's classes for oxygen. I continued to ask and search. She continued to teach. I didn't think she even knew my name.

One day, while I was writing a research paper and feeding my baby, the phone rang. Absentmindedly, I picked it up.

I didn't have any friends named Tziporah; I had no idea who was calling.

"I wanted to know if you and your family can join us for Friday night dinner."

The voice sounded so familiar. Where was it from? And then it hit me. "Rebbetzin Heller?! Is that you?"

After I hung up the phone, I called my husband who was equally surprised. "I wonder how she got our number."

That Friday night we walked down the moonlit streets of Har Nof with our three little girls in their strollers and a bottle of wine. When Rebbetzin Heller opened the door, the aroma of chicken soup and fresh challah enveloped us. Her children were laughing on the couch with her husband, Rabbi Dovid Heller. The apartment was bare except for: the couch, the beautifully set Shabbos table, the candlesticks and cabinets full of Torah books. In the kitchen sat an old urn and an ancient hot plate, but the warmth all around me shone through the simplicity.

When Rabbi Heller stood up to say kiddush, I looked up at the pure Sabbath lights reflected in the window, and I thought: This is the most beautiful home I have ever seen. Throughout the meal, the Rabbi and Rebbetzin sat beside each other at the head of the table while their children served. The Rabbi's smile lit up the room as he spoke softly with his Rebbetzin, his children and my husband. I kept waiting for a speech of some sort that I was sure either the Rabbi or Rebbetzin would make, but it never came. Instead, Rebbetzin Heller held my baby almost the entire meal, the Rabbi asked my husband about his work and his background, and he told stories to his captivated children that imparted Jewish wisdom.

I have never again witnessed such an extraordinary marriage. The peace and the love between the Rabbi and Rebbetzin could literally be felt in the room. Neither of them overshadowed or interrupted the other. The children looked up to them and gathered around them like vessels waiting to be filled with the overflow of their pure connection to each other.

On the way home, I asked my husband if he knew where the Rabbi worked. He shook his head.

"He didn't talk at all about himself. But I thought he was brilliant. I wonder if he teaches."

Rabbi Heller ran far away from honor. His primary motivation was to serve God with humility and modesty.

I didn't find out what Rabbi Dovid Heller ztz"l did until yesterday when he passed away rather suddenly from a stroke. I didn't find out that he was the administrator of Yeshivas Pachad Yitzchak for over 20 years. I didn't find out until yesterday how he was known in his neighborhood as a man who pursued acts of kindness the way others seek riches, whose gentle countenance and wisdom changed the lives of countless individuals. But I'm not surprised. The extraordinary modesty and depth of his character came through when he sat at the head of the table next to his beloved Rebbetzin. It came through when he laughed with his children on his living room couch. It came through the purity of his voice when he made kiddush. It was clear to me that this was a man who ran far away from honor, whose primary motivation was to do the will of God, with humility and modesty.

When I heard that Rabbi Heller passed away yesterday, I was sitting with my children at the dinner table. I walked to the kitchen window and looked out at the sun sinking through the trees on a horizon that looked like it had just been set on fire. I felt my eyes fill with tears as I thought of my teacher, my mentor, my hero. The horrific loss that she must be feeling right now as the other half of her soul moves on to the next world.

I looked back at my children and their questioning eyes. And I thought: "Rebbetzin, I can't imagine what you are going through, but I am praying for you. Just like you prayed for me and for all of your students. And all of these precious children around my dinner table are here because of you. All of the goodness and truth that fills my home is here because of you. Your extraordinary marriage, your children and your grandchildren continue to light up the world in ways you can't even imagine. May God comfort you among the mourners of Jerusalem. May your husband's pure, lofty soul rise higher and higher through everything that you have built together."

What I’m Learning about Almost Dying

Why was the Menorah Burning for 8 Days Such a Big Miracle?
The Promise Of The Land
Which Chat Are You On?: Parshas Behar/Lag Ba’Omer
Do You Like Slow-Cooked Food? Thank the Jews
Comments
MOST POPULAR IN Spiritual Odysseys
Our privacy policy