If I Forget Thee, Auschwitz 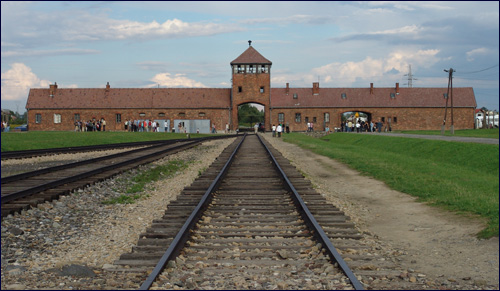 Tisha B'Av and the desensitization to tragedy.

When the Romans destroyed Jerusalem, the city that exists both in Heaven and on Earth turned out to exist only in Hell. The surrounding hills were stripped of trees, a production line of crucifixes planted in their soil; throats were slit in the Temple with industrial efficiency; women and children were burnt to death.

Famine was so severe that when escaping Jews attempted to smuggle coins by swallowing them, their stomachs exploded. Seeing this, Roman auxiliaries slit the bellies of two thousand Jews in one night, in search for gold. The Book of Lamentations opines that "those killed by the sword are better off than those who die of famine" – but for many, the two gruesome ends elided.

As fate would have it, the expulsions of the Jews from England (1290), France (1306) and Spain (1492) all occurred on or around the same date – the ninth of Av. So did Germany’s entry to the First World War (1914) and the deportation of Jews from the Warsaw Ghetto to Treblinka (1942). Each involved the end of the world as its Jewish inhabitants knew it.

And yet, it remains terribly difficult to muster much angst over tragedies that happened long in the distant past. History, we are accustomed to accept, was nasty and brutish. We almost expect past civilizations to have been, oxymoronically, barbarous. On the occasions when the barbarity surprises us, it rarely shocks us – certainly not in viscerally, or with any sense of emotion.

As the camera pans across the bloody set of history, we regard its extras with indifference. They are nameless, faceless and – by inevitable extension – soulless. They are numbers, not people.

When I visited Auschwitz-Birkenau on the March of the Living, I found myself overwhelmed by two fears about this world: that it is capable of producing such atrocities, and that it is capable of forgetting them. By the railroad of Auschwitz, we sat and we wept for worlds lost and for worlds fated to be forgotten. In centuries to come, will visitors be emotionally shaken when they visit the gas chambers and crematoria? Or will they regard this page of history as just one of many on which humanity collectively went mad?

Our mantra of "Never again" is essentially a defiant call that the Holocaust might defy the laws of history. That it remains seared into the conscience of mankind forever, instead of receding from history to legend, to footnotes or to obscurity.

Tisha B'Av offers a collective opportunity to make good on the promise "Never again" – not just for calamities in living memory, but those before it. We know that a necessary, if insufficient, means for preventing a recurrence of history is to refuse to forget it.

Through Jewish ritual, we dramatically enact the values we seek to uphold. Consider it a form of method acting: if we find it difficult to feel sad or angry about the past, we physically immerse ourselves into a state of grief such that we totally identify with that feeling.

By crouching on the synagogue floor to listen to the haunting words of the Book of Lamentations, we use words and movement to cultivate empathy with strangers of whom we know nothing but the poetry left in their anonymous memory. By fasting, a small personal sacrifice, we symbolically affirm that the big catastrophes of the past should affect our lives and our routines in the present day.

We force ourselves to care. And we begin to reconnect to history and feel the pain.

Tisha B'Av provides a template for how participation in tradition can immunize us against desensitization to tragedy, no matter how remote geographically or temporally. And in so doing, we may pray that two millennia hence, generations will refuse to forget Auschwitz, just as two millennia on we refuse to forget Jerusalem, may it be fully rebuilt, speedily in our days.

Finding the Joy of Tisha B’Av

The Strength to Constrict
Were Adam and Eve Jewish?
How I Learned to Love the Multiverse
10 Big Jewish Inventions
Comments