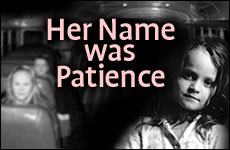 She was unusual and the kids knew it. The time has come to ask her forgiveness.

Her name was Patience, and that was enough to do her in. But there was more: Patience lived in the poorer part of town where there were broken-down cars and other junk in her yard, and her house was the last stop for the school bus, so everyone on the bus saw the undesirable conditions in which she lived. She was doomed.

Maybe there would have been more hope if her name had been normal – like Katie or Anna. But Patience was unusual – in name and life – and the kids knew it.

Every morning went like this: all of the kids would get on the bus from the various developments in which they lived. They would sit together, chatting away, looking out the window, doing what kids do. And then the bus would turn onto the main road of our small Massachusetts town and head for school, making one last stop – at Patience's house.

As the bus door creaked open, there would be silence as the kids watched Patience climb in. She didn't really stand out in a crowd, but the kids had decided that she did. Her clothes weren't as nice, her hair was limper and, like dogs that smell fear, my classmates sensed her terror.

The kids would even spread themselves out in their seats, manipulating their belongings to take up as much room as possible, because no one, absolutely no one, wanted to be the one to sit with Patience. And if Patience would sit beside you, you'd have "the cooties" for at least a day, possibly even two or three.

And so it went, day in and day out. Patience would get on the bus, the kids would scream her name, tease her, and refuse to let her sit with them. Patience would inevitably force her way into a seat as the bus driver yelled at her to sit down already, always oblivious to her situation, and the unlucky seat partner would cringe and scoot as close to the window as possible, to avoid contamination.

Patience never cried. She never attempted to defend herself. She never made eye contact. She just looked straight ahead and walked from seat to seat, back and forth, until she had a place to sit and then got off the bus at school and disappeared into the building, knowing that she would have to face the same thing in the morning. It had to be excruciating.

And every morning when I would get on the bus, I would try to figure out how I could avoid being the one with whom Patience decided to sit. I would scan the seats for one with somebody already in it, and if none were available, I'd sit in an empty one, hunker down, and begin to pray. I'd pray that Patience wouldn't sit with me. I'd pray that she'd sit somewhere else. I'd pray that if she did sit with me, that I wouldn't become the object of teasing and torment. These things worked by association, you know.

And when she did sit with me, which to my dismay, happened with a certain degree of frequency, I would turn, face the window, and pretend to be very interested in the passing scenery. But every so often, when I was sure she wasn't looking, I would cast a furtive glance at her, peeking at the face that had endured so much. And like always, she would be staring straight ahead, with a blank, unreadable, and distant expression on her face. And I would find myself flooded with guilt.

I am ashamed to admit that this teasing went on for years. And the most I could do was feel guilty. Quite simply: I was a coward, and I was terrified that if it wouldn't be her, it would be me.

It has been something like 15 years since I rode that bus every morning, avoiding Patience, secretly feeling terribly guilty and sorry, and trying to glimpse the personality inside the abused shell. And I have thought of her almost every morning since.

I can't help but wonder what would have happened if I'd invited her to sit with me, or if I'd made room for her in my seat as soon as she came on the bus.

Looking back, I don't blame myself for my cowardice. Children can be the cruelest of tormentors. Their actions and words toward one another can cause serious damage. I was terrified of being the next victim. But now I can't help but wonder what would have happened if I'd invited her to sit with me, or if I'd made room for her in my seat as soon as she came on the bus. I never screamed her name, I never told her she couldn't sit with me, but I passively participated by not extending myself. I never did anything, but then again, I never did anything.

Sometimes I wonder what happened to Patience. What kind of person did she become, what kind of person could she become, after so many years of torment? What happens to a child who daily has her every vestige of self-esteem and dignity torn from her? These thoughts turn my stomach. And I realize that I have never forgiven myself.

In the days of mourning for the Beit Hamikdash, the Holy Temple which was destroyed because of sinat chinam, baseless hatred, I think of Patience even more.

And I wonder why I never prayed for her those mornings on the bus. At least if I wasn't going to defend her or invite her to sit with me, I could have prayed that the teasing would stop. Instead, I prayed only for myself.

I did not pray for her then, but I can pray now. I pray that no person, anywhere, in any circumstances should ever be the object of baseless hatred. I pray that children will be nice to each other. And I pray that I can teach my children that "the cooties" aren't real, that passively sitting by only perpetrates the problem, and that treating others with dignity, no matter how difficult, is what counts. And I pray that I can give them the confidence to do this.

The time has finally come to ask Patience for forgiveness. I don't know where she is or what she looks like now, but I sense that there is some of her in all of us, a little part of us that has faced some abuse, suffered some injustice, that is holding some grudge. Please let go, move on. Please don't let there be any more victims. Don't let there be any more perpetrators. Give respect and honor where it's due. And... please forgive me.