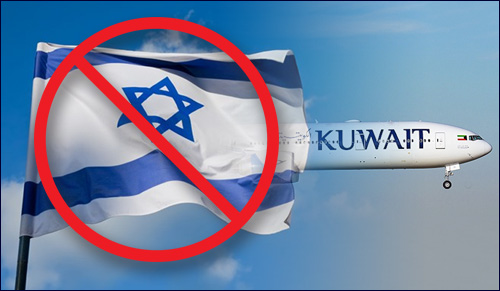 The airline’s refusal to fly Israelis is discrimination, pure and simple, and has no place in the free world.

All Adar M., an Israeli student living in Germany, wanted last summer was to travel from Frankfurt to Bangkok. He booked a ticket with Kuwait Airlines which provides global service to thousands of customers around the world each year. Except Israelis, which the airline refuses to fly.

A few days before his scheduled departure in August 2016, Kuwait Airlines learned that Adar M. (his full last name has been withheld in court papers) possesses an Israeli passport and cancelled his ticket. The state-owned company’s hatred of Israelis meant that not even one previously-issued ticket could be honored if the passenger carried a passport from the Jewish state.

Kuwait Airlines offered to re-book Adar on a different airline but Adar refused. He was flying from Germany, a country that bars discrimination. He felt Kuwait Airline’s Israeli-free policies have no place in Western Europe today. Adar’s case was taken up by the Lawfare Project, a New York-based nonprofit think tank that fights the abuse of law to harm Israelis. Lawyer Nathan Gelbart argued that Kuwait Airlines’ refusal to transport Israelis violated Germany’s own anti-discrimination laws.

Yet in a landmark decision last week, the District Court in Frankfurt ruled in favor the airline, protecting its right to refuse service to Israelis. German law bans discrimination based on race, ethnicity and religion, it concluded, but does not ban discrimination based on nationality. The court declined to say whether the law banning Israelis “made sense”, but noted that Kuwait Airlines employees could face prison or other punishments back in Kuwait if they dared to do business with Israelis. Even Israeli Arabs or Israelis with dual citizenship are deemed too tainted for the airline to carry.

“The statement by the court that my client was supposed to accept transportation on other airlines is nothing more than capitulating to anti-Semitic discrimination,” Mr. Gelbart said. He promised to appeal the decision, calling it “shameful for democracy and for Germany in general.”

Frankfurt’s mayor Uwe Becker echoed that criticism, adding that “An airline that practices discrimination and anti-Semitism by refusing to fly Israeli passengers should not be allowed to take off or land in Frankfurt, or at any other airport in Germany.”

That principled position has already been taken by other nations, particularly the United States, when it comes to Kuwait Airlines and its anti-Semitic, discriminatory practices. In 2015, the US Department of Transportation ordered Kuwait Airlines to “cease and desist from refusing to transport Israeli citizens between the US and any third country…” Rather than sell tickets to Israelis, the airline dropped their popular New York to London route.

The following year, Switzerland temporarily stopped the airline after an Israeli filed suit in that country after being denied a ticket from Geneva to Frankfurt. Hatred trumped profit for the state-owned airline, and for several weeks, Kuwait grounded all its intra-European flights.

Tragically, the European ban on Kuwait Airlines did not last, and the discriminatory airline continues to fly European citizens - so long as they don’t carry any Israeli passports.

Most recently, in September 2017, Kuwait Airlines canceled the New York to India ticket of Nuseir Yassin, an Israeli Arab who blogs about his world travels. “Because I’m an Israeli, the entire airline is not allowed to take me on their planes…. This is daylight discrimination and it should be illegal” the blogger declared in a post that quickly went viral.

Standing up to do the right thing is the hallmark of freedom and democracy. That’s why it’s so troubling to see Frankfurt’s District Court cave into hatred and anti-Semitism. If we want ideals like freedom and human rights to mean anything real, we can’t just pay them lip service when it’s easy; we have to work to defend these concepts when they’re under attack.

The True Legacy of 9/11
It Takes A Lot Of Faith To Be An Atheist
How Instagram Brought Back This Nostalgic Soup
What Makes Eli Run?
Comments
MOST POPULAR IN Current Issues
Our privacy policy