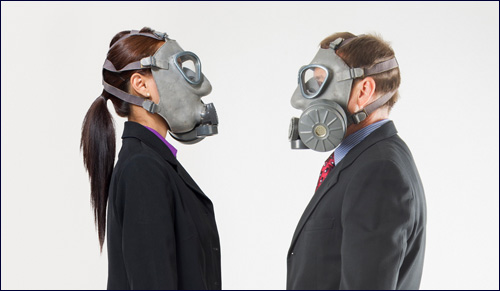 And how to make sure they don’t poison your relationship.

Based on data gleaned from several groundbreaking studies, renowned psychologist and relationship expert John Gottman can predict in 15 minutes, with a 91 percent accuracy rate, whether a couple’s marriage will succeed or end in divorce. His predictions are based, in part, on the presence of four negative types of interactions between the couple: criticism, contempt, defensiveness and stonewalling – or, as Gottman refers to them, the “Four Horseman of the Apocalypse,” for their potentially cataclysmic effect on a marriage.

Living together with another person means we will always have complaints at times. We’re human; it’s unavoidable. Complaints, while negative, are not necessarily unhealthy, primarily because they tend to focus more on our partner’s behavior versus his or her character: “It really upset me that you forgot to do the dishes last night after you agreed to. Please can you make sure to do them before you leave for work?”

Criticism, on the other hand, is a more global attack on a person’s character or personality: “You always forget to do the dishes when it’s your turn. It really brings out your selfish streak. I don’t understand how a grown man can be so irresponsible and uncaring.”

When we criticize, we tend to use all-or-nothing words like “always” or “never,” and what we imply with our accusations is “what’s wrong with you?”

Contempt is similar to criticism, but it’s more severe. It’s usually an attempt to belittle or demean, and it conveys a sense of disrespect and even disgust toward the other person.

Contempt can sometimes signal that a husband and wife have long term negative thoughts about each other that have become baked into the relationship over time. If there are ongoing conflicts in the relationship that have gone unresolved for a long time, contempt can set in. If partners tend to communicate with sarcasm, hostility, or sneering toward each other, contempt is the culprit. Condescending body language (eye-rolling) or making jokes at a spouse’s expense can also be a form of contempt.

If you have ever been on the receiving end of someone’s contempt, it’s natural to try to defend yourself. However a pattern of defensiveness can be highly toxic to a marriage if employed as an ongoing strategy of communication because it is really an attempt to blame the other person. What we are really saying, in effect, when we become defensive is, “It’s not my fault, it’s yours.”

Picture a wife complaining to her husband about not doing the dishes or helping to put the kids to sleep. He responds, “Last week I came home early from work to try to give you a break. I even called your parents to say hi, and you know how much I love doing that. (contempt, through sarcasm). And may I just remind you, in case you forgot, (contempt, through moral superiority) about those earrings I bought you that you loved and said were the most beautiful gift ever. And now you complain about dishes and putting kids to bed? I can never make you happy. It’s never enough for you (criticism: it’s your fault).” When we are defensive, we act like victims, and instead of defusing the situation, our defensiveness often escalates it.

The result of criticism, contempt and defensiveness is often stonewalling, which is a form of tuning out. We can stonewall physically by walking away or ignoring, or emotionally by going silent and refusing to discuss something. Let’s say after the woman in the above example criticizes her husband for not doing the dishes. He looks down and refuses to discuss it, saying, “I’ve had a long day, I can’t deal with this,” or he tells her, “Listen dear, I’d love to discuss this another time, but I can’t keep the guys at basketball waiting” and walks out the door, or he says nothing at all.

Gottman reports that men tend to stonewall more than women because biologically they “flood” (or become physically and psychologically overwhelmed) quicker than women – likely based on the fact that men tend to have more active cardiovascular systems and slower stress recovery rates. During an argument a man’s heart will beat faster and stay accelerated for longer; his blood pressure will become more elevated and remain higher for longer than a woman’s. Given this physical reality, it’s no wonder that men often have a higher propensity to avoid conflict.

Body chemistry notwithstanding, no one is off the hook in the above scenario; a chronic habit of stonewalling can be poisonous to a relationship.

When thinking about criticism, contempt, defensiveness, and stonewalling, it can be helpful to try to identify which of the four we tend to use more often in our relationships. We can work on increasing positive interactions and enhancing the general atmosphere of our home by lowering our reliance on this form of negative communication. Usually, each of us has a “go to” strategy based on our personality, history and coping style. We can focus on trying to reduce our use of these “weapons” of communication, not just in our marriages, but also with our children, parents, siblings, friends and co-workers.

It’s also important to recognize that the Four Horsemen make an appearance in almost all marriages at one time or another. That doesn’t necessarily mean that one’s marriage is weak or doomed. This is particularly true if a couple is good at something Gottman calls “repair attempts” – statements or actions a couple use to de-escalate and prevent tension from spiraling out of control. Examples of this are saying a simple, “I’m sorry” even if it’s not your fault, making a private joke that only the two of you would understand, doing something funny to defuse the tension like making a silly face, or even a plaintive, “Do you love me?”

Couples who are good at recognizing, receiving and initiating repair attempts are demonstrating not just emotional intelligence, but also humility and spiritual awareness. They instinctively understand that far more crucial than any point to be scored in the midst of conflict is the need to extinguish the fire before it burns out of control and causes irreparable damage to the relationship.

Repair attempts are a way of saying to your spouse, “I know we are not agreeing right now. We’re both frustrated/angry/hurt/fearful, but I love you and I don’t want to destroy you or our marriage. Maybe you’re in the wrong or maybe I am. It doesn’t matter. I’m sending you this white flag of surrender because our marriage is sacred and I want to be close to you.”

Simone Sobel is psychotherapist who maintains an Atlanta-based private practice. She and her husband were born in South Africa and have four daughters they’ve affectionately named their “Southern Belles.” Simone enjoys writing articles and blogs about relationships and about mental health and is also a practicing ceramic artist.

7 Questions to Ask Before Getting Married

My Husband and the Suitcase

#1 Most Important Thing to Change Your Marriage