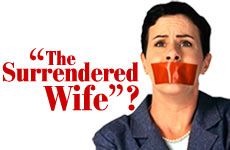 I cringed at the title, but the book, "The Surrendered Wife," offers a surprising amount of wisdom.

I don't know who her PR agents were. I don't know what her marketing strategy was. I just know that there couldn't be a worse title for a truly valuable book than "The Surrendered Wife" by Laura Doyle. Even as I write it I cringe. But it got my attention. And maybe that was the goal...

Despite my reservations, I read the book in an effort to demonstrate how broadminded I am. "The Surrendered Wife" is a book about letting go. It is not a book about submissiveness. It is not anti-feminism. It is a book that demonstrates the destructiveness of trying to control another human being, particularly your spouse. So I read it. Cover to cover.

Perhaps my husband would enjoy if just once I would keep my big mouth shut.

I saw myself, and many close friends (you know who you are) in Ms. Doyle's stories. And while she takes her philosophy to an extreme of passivity that I find unpalatable – i.e. "don't express your opinion, just say to your husband 'whatever you think'" – there is a lot of wisdom in her insights. Perhaps my husband would enjoy if just once in a while I would keep my big mouth shut and turn to him adoringly and say, "Whatever you think."

Our husbands want to know they have our respect, trust, and, as Laura Doyle suggests, every time we control, direct, or even worse, criticize them, they know they don't.

And it becomes a self-fulfilling prophecy. As with children. If we don't expect our husbands to succeed, they probably won't (unless he's got a very contrary personality and responds well to reverse psychology!)

The nitpicking, the correcting, the "I know a better way" attitude is destructive on many levels – to the husband personally and to the marriage. I know that I don't enjoy spending time with people who are always telling me I'm wrong – either directly or by implication.

And this situation sure doesn't augur well for one's intimate life. It doesn't encourage closeness and desire.

FOR HIS OWN GOOD

Of course when we correct our husbands, we mean it for their good. We're only doing it to help them. But most husbands don't experience it like that. To them, it's an attack. To them, it's emasculating. To them, it's depressing and destructive.

There's nothing liberated or egalitarian about being critical.

"But I do know a faster way to drive there," wives complain. Good. Keep it to yourself. (I would say, "Unless asked"; Ms. Doyle would say, "Even then.") You'll get there five minutes later with a stronger marriage.

"But he's handling the situation all wrong." Give him a chance to figure it out for himself and grow from it. Don't rob him of his opportunities to stretch and change.

There is an important caveat in the book that none of this advice applies to an abusive situation. Similarly, if there is, God forbid, a serious crime at stake. If your husband is about to commit armed robbery, don't say, "Whatever you think!"

We have to lift our husbands through caring and respect. As Rabbi Eisenblatt writes in Fulfillment in Marriage: "...to the extent that the marriage partners appreciate and respect each other they will create a nourishing atmosphere in which each can grow and develop into a still better partner."

Worth taping to the fridge.

Positive expressions of pleasure after tasks well done accomplish much more than harsh words. And don't qualify those compliments. Drop the "but" as in: "That was nice of you to make dinner but why didn't you clean up the kitchen?" "I appreciate that you went grocery shopping but why did you buy ten bags of potato chips?" Practice saying two simple words: "Thank you."

A woman's belief in her husband's abilities and potential will inspire him to greater heights. Nagging will drag him down.

And the most surprising thing of all is not only do things not fall apart without us at the helm, sometimes they actually get better.

Postscript: Whenever I address this topic to women, they invariably say, "What about the men? Don't they need to hear this?" Of course they do. There are many men who would benefit from the ideas in this book. Hopefully their needs will be addressed. But asking, "What about the men?" can also be a way of avoiding personal responsibility. Don't worry about the men for a minute. Look inward instead of outward. Do you see potential for growth and change? You go girl.