Fear and Love of Being Jewish 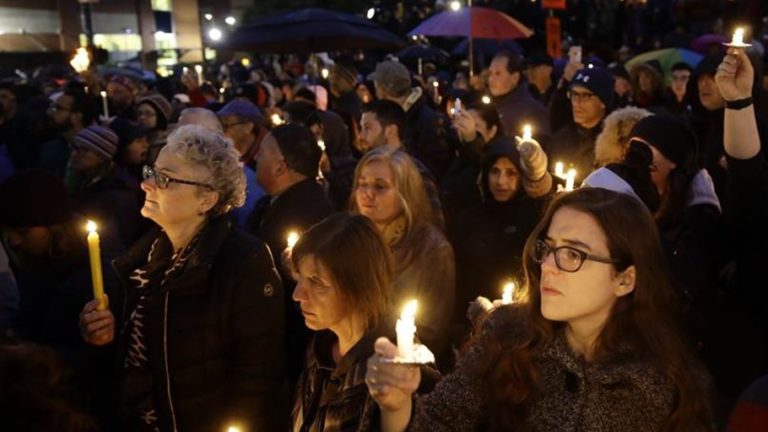 After my shul was firebombed, I decided it wasn’t safe to be Jewish and distanced myself from Judaism. Then I met Dena.

I grew up going to a reform temple a few times a year. My family has always been more culturally than religiously Jewish, but Judaism runs deep in my blood regardless. I went to Hebrew school and had a Bar Mitzvah and grew up in a community where many Jewish people lived.

When I was 20, I moved from Newton, MA to Reno, NV and for the first time in my life began to experience my Judaism as something that made me different. I was one of the others. Suddenly, I was "the Jewish guy", and I'd be hit with stupid jokes about being cheap. It mostly annoyed me and sadly, I learned to live with it.

I met people who had never met anyone Jewish. I was a novelty for them. I remember a woman asking me, "But you still believe in Jesus right?" The entire concept of me was out of her scope of understanding.

I remember having a good conversation with this guy who seemed perfectly normal. He came across as a nice guy. Then at some point, he changed his shirt and revealed a large swastika tattooed on his chest. My heart raced, I went into panic/survival mode. I explained how I was Jewish and that this wasn't okay. He explained to me that he no longer agrees with that tattoo and what it represents and how he got it when he was a dumb, angry teen. I could tell he was being sincere. I saw his humanity behind the ink. I ended up dropping him off on my way home.

I had gone to one of the two synagogues in town a couple of times. I remember being invited to a Shabbat dinner after services one night. It was very cathartic to be around my people when I had felt so alone and separate from the masses. I had found a piece of home, at least temporarily.

Then one day the synagogue was firebombed. Some people had thrown Molotov cocktails through the windows and caused significant damage. I was devastated. I remember seeing the newspaper and shaking, speechless. I could have been inside. At that moment I made a decision that I would hold onto for the next decade: "It is not safe to be Jewish."

I distanced myself from my faith. I found myself actively trying to avoid my Judaism and shut down to anything remotely connected to it. I would go to Passover Seders and High Holiday services but I was only there physically. Mentally and emotionally, I was numb. I had checked out. I couldn't take the risk. It wasn't safe.

I found a disdain toward Jews built up in me. I didn't hate the Jewish people; I just wished Judaism didn't have to be so Jewey. Like why does everything have to be Hebrew? I found myself annoyed by my uncle and grandmother's adherence to traditions. I became very critical of all things Jewish. My guard was way up and I needed to feel protected.

Then I met Dena. As we got to know each other, she gradually brought me into her world – a world where Judaism is not dangerous but a rich, beautiful, tapestry of community, tradition, and strength that has endured with grace for millennia. I met her family, some of who were studying to be or working as rabbis. I met her uncle who makes tallises and I met young Jewish adults who were a lot like me in many ways.

Initially, I found all of this very triggering and I was not comfortable at all. But gradually, my walls came down as I reconnected with my faith through love – love of my soul mate and love of Judaism. When I shared my experiences with her, she reassured me of my safety. Her love provided safety and started bringing me closer to God. I've come to really love my culture and my people.

My mind is heavily weighted by the tragedy in Pittsburgh. But this time I'm not running away. I am a Jew and we endure. It's in our DNA. People have been trying to get rid of us for centuries. With God’s help, we survive. We continue our story.

I grieve for the Tree of Life Synagogue and mourn the loss of life. Yet I am comforted by our collective strength and standing tall with pride to be Jewish.

Noah Kowaloff is a soulmate coach based in Framingham, MA. Noah helps high achieving women find their soulmate in a safe empowered way while there’s still time to start a family. He can be reached at noah@simplysoulmates.com

On the Death of Rabbi Zecharia Wallerstein

The Warrior Within: Overcoming Life's Challenges with Addicted Parents
Chukat 5782: Let’s Play the Blame Game!
The Sin of Moses: The Two Ways to Communicate
In Aftermath of Chicago’s July 4th Shooting, Local Moms Provide Countless Points of Light
Comments
MOST POPULAR IN Spirituality
Our privacy policy