Two are Better than One 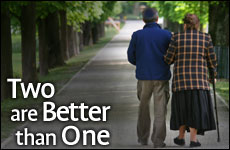 They had been married 62 years and there were no children. Every day she sat by his side, willing him to get better and come home.

He was hospitalized in mid-June after a stroke. He was in his late 80's, a tall, gaunt and taciturn individual who took his handicaps stoically. She was eight years younger than him, thin and tall as well, with grey hair pulled back tightly in a bun -- the way older women used to fix their hair several decades ago. They had been married 62 years. There were no children.

She came every day. She sat at his side from 8 A.M. in the morning until nighttime. She served him, straightened his bedding, cut up his food, encouraged him to eat and helped him hobble to the bathroom. They talked very little, but she was "on watch" throughout the day. The doctors had a hard time getting her out of the room when they made their rounds.

She didn't hover around the staff or make demands of the nurses. She was just there, anxiously noting what they wrote on his chart, waiting for one of the interns to tell her briefly, "No change today," or "His blood pressure isn't stable." Some of the staff found her annoying, hanging around all day, silently watching, waiting tensely.

Others felt sorry for her, an old lady, sitting there all day long, a 12 hour shift with no one to relieve her.

Others felt sorry for her, an old lady, sitting there all day long, a 12 hour shift, with no one to relieve her. There were no offspring, no neighbors, no friends. The social worker tried to get her to talk, and then made some suggestions; to take hired help, to stay less hours, to get some rest, all of which she brushed off with a brief, "How can I leave him?" She was clearly anxious in her own quiet way, maybe even terror stricken.

The only one who got to know her and succeeded in getting her to talk was Ayalah the physiotherapist. Every day the old woman accompanied the aid who took her husband for physical therapy. The therapist quickly realized that the wife wouldn't leave him, even for a minute, and that she was so tied up in his every move that it was as if she herself was going through the routine exercises. So Ayalah gave her tasks to do, "Here wrap these bandages around his foot, like this," or "Stand next to him as he walks through the bars."

The physiotherapist also shared with the woman remarks about why they did certain exercises and how this or that muscle was being strengthened. She made small talk with her in a very general way, and gradually the woman opened up a tiny bit herself. They were both Holocaust survivors. They had lost their entire families in Europe -- she came from Germany; he was from Poland. They met in a D.P. camp, and married just before making aliya to Palestine. The British interned them in Cyprus for another few months, but at last they fulfilled their dream and were able to start a new life in Israel.

As she led him through the parallel bars, the patient's wife revealed that he had worked for many years as a government clerk; she had always been "just a housewife". There were no children, no nephews, no nieces -- only each other. She needed him to get well, and he was completely dependent on her. Unfortunately his progress was very slow. He was often too tired to do the exercises. He got a fever and couldn't go to physical therapy for a week. Her sense of panic increased. June turned into July and then August.

The social worker began broaching the subject of release from the hospital and placement in a nursing home. The woman was aghast. "Never!" she said with uncommon strength and energy. "He'll never be placed in an institution!"

"But how will you manage?" the social worker said, trying to get her to reason.
"He can walk only a few steps. He can't always control his bodily functions. He barely eats."

But the woman merely shook her head emphatically, "No."

The social worker tried another line, "Can you afford a live-in caregiver? (She knew that with a government pension that was unlikely.) Would you like to apply for a Philippine worker?"

The woman again turned down her suggestions and went back to hovering over her husband. For her the conversation was over.

At the staff meeting where the doctors, nurses, therapists and social worker discussed each patient and their release plan, they all shook their heads over the man's possibilities. "After all he's been here three months already. It's unlikely that he'll get much better," one of them said. "He's almost 90, don't forget," said another. "I'm worried what will become of her, his wife," the social worker remarked.

Defensibly Ayalah added her opinion, "Sometimes older people need more time to rehabilitate. After all he had a setback when he got that infection." Most of the staff knew all that, but nonetheless they had to keep in mind that there were other patients waiting to be admitted. They had responsibilities, they had experience.

"He'll never be independent," declared the learned Head of the Department.

It was as if by her sheer willpower he climbed out of his decline.

But the gaunt old man fooled them all. As if he had heard their dire predictions and wanted to negate them, he started to improve, very gradually, with slight lapses. He started to walk, hesitantly, with his loyal wife at his side. It was as if by her sheer willpower he climbed out of his decline; as if her need for him to come home caused the transformation. He began to eat, he was able to go to the toilet on his own, and even said a few words in therapy.

At the beginning of September, in time for the holidays, he was released. As the two tall, thin octogenarians left the ward that day, smiling ever so slightly for the first time, it seemed that they were walking in tangent, leaning one towards the other, as if holding each other up -- as indeed I'm sure they did.

"Never underestimate the power of a woman," said one of my colleagues as we viewed their departure. But instead I couldn't help thinking of King Solomon's words:

Two are better than one...for should one fall, one can raise the other. But woe to him who is alone when he falls and there is no one to raise him. Where one can be overpowered, two can resist attack. (Ecclesiastes, 4:8-10)

Even from a serious stroke, I thought almost aloud, as the loving couple passed from our sight around the corner.

Super Dreams
What Makes Eli Run?
The Tyranny of Materialism
Science Enters the Mysterious Inner World of Consciousness
Comments
MOST POPULAR IN Spirituality
Our privacy policy