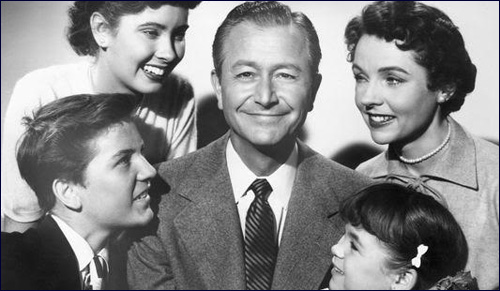 TV dad Jim Anderson may be from the 1950s, but he could teach today's fathers a thing or two.

The TV show Father Knows Best has come to symbolize the stereotyped gender roles of the 1950s. The father, Jim Anderson, worked as an insurance agent while his wife, Margaret, stayed home. Their three well-behaved children, Betty (“Princess”), James (“Bud”) and Kathy (“Kitten”) loved and respected their parents.

Presenting an idyllic family of the times, Father Knows Best ran from 1954 to 1960. It won six Emmy Awards and in its final year was the sixth most popular show on television.

In each episode Jim came home and dealt with problems in his family – usually involving friends, relationships or school. Following their father’s wise advice, the problems were resolved.

Over the past decade when the role of fathers is discussed, Father Knows Best is often cited as reflecting gender roles so out of date there isn’t anything today’s father could learn from the show. I disagree. As I watch the show today, I see important lessons for fathers that address common complaints wives have about husbands. These complaints include not paying enough attention to what is going on at home and not helping sufficiently with parenting – the kind of tensions that can lead to breakups.

Jim Anderson was a very involved father. In each episode, he was aware of situations at home that needed to be dealt with, and he dealt with them. Though it might be unrealistic to portray a father as being able to solve every problem, the important lesson for today’s fathers is that Jim stepped forward and got involved. He didn’t ignore what was going on in his home and expect his wife to handle it.

For example, when Bud was applying for his first job – to work in a stock room – and wanted to put phony job experience on his application, Jim told him that if he lied on the application, he might get the job but he wouldn't keep it. Bud followed his father’s advice but became upset with this advice after his friend Eddie, who put phony experience on the application, got the job. However, Eddie’s deceit was soon uncovered and he was fired. Bud was given the job.

Jim understood what many fathers today haven’t been taught – the importance of showing their share of leadership at home. His wife did not complain, as I’ve heard women do today, that her husband was not taking responsibility on the home front. How common is this complaint? In a 2011 survey by TheBump.com and ForbesWoman.com, 24% of working mothers and 28% of stay-at-home mothers said they sometimes feel like “married single moms.”

Jim chose a work-life balance that made his family a priority. When he had to choose between going to a PTA meeting to see Kathy read a biography she wrote about him or to a Chamber of Commerce meeting that could benefit his career, he chose to see Kathy. Today, that could be a career limiting move. It could have left him “daddy-tracked.” His priority was his family, and his actions showed it.

Jim spoke calmly. He didn’t raise his voice – even when, for example, he was under financial stress. After being persuaded to buy a mink coat for his wife, Jim was overdrawn at the bank and unable to even pay the newspaper delivery boy. He calmly said to Margaret. “What’s come over us? We used to buy only things we could afford.”

Some parents may think it’s unrealistic to expect them to keep their voices down – except to stop children from doing something dangerous. Think about when you see a father yelling at his children. He looks like he’s out of control and hasn`t got a clue how to handle the situation calmly. A father has to realize that if he blows up at his children, they may blow him off and have little to do with him. That should get him to lower his voice.

From what I’ve seen in coaching fathers, many families would benefit from having fathers who have learned these important lessons. Sadly, I have seen how problems like fathers not shouldering their share of leadership, not making their families a sufficient priority and frequently raising their voices have led to marriages disintegrating. Although people might dismiss Father Knows Best as a relic of another era, some aspects of successful fatherhood are timeless. Housewives are relatively rare these days and it’s hard to unglue kids from their smartphones, but many dads could do worse than keep old-school Father Knows Best in mind.

Cut to the Chase: The Secret to Raising Happy, Emotionally Resilient Children

Raise Your Kids without Raising Your Voice: The Misbehaving Child

Raising Resilient Children
Blocked Goals and Anger
Why the Mezuzah is Placed on a Slant
Faith: the Axis Upon Which the Wheel of Science Turns
Comments
MOST POPULAR IN Family
Our privacy policy