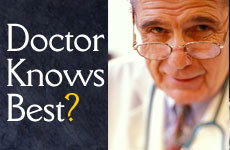 While the Jewish world has the Torah from which to seek guidance, the secular world must rely on consensus. As a result, any society-wide decision must be widely inclusive of almost all philosophies, preferences, and religious beliefs. As there is very little that we all agree upon, very little can be legitimately circumscribed without infringing on the personal freedoms of someone individual or group.

So, when it comes to medical ethics, and particularly medical decision-making, secular society treads very lightly in compelling individuals to accept any particular treatment. The days of the physician knowing best and the patient blindly acquiescing are over. Instead, the modern approach to medical ethics is predicated upon several universalistic principles.

Secular society demands several things from physicians: that any health-care decision promoted by the physician be in the patient's best interests (beneficence); that the physician "do no harm" (non-maleficence); and that health-care be provided in a fair and equitable way to all, without prejudice (justice). But these three requirements are dwarfed by the fourth -- that the patient has the ultimate responsibility and final decision-making capacity with respect to health-care decisions (autonomy).

The question naturally arises how a patient without medical training can exercise their autonomy if they do not understand the choices being placed before them. That is why one of the most important requirements in allowing for true patient autonomy is the concept of informed consent. The patient must be given enough information to allow for an educated and reasoned healthcare decision.

The usual secular understanding of informed consent is predicated upon the right of the individual to express his autonomy by deciding which actions he will or will not allow to be performed on his body.

There are those who would (incorrectly) argue that such a right is not compatible with Judaism, which tends to take a paternalistic view of human endeavors, including the practice of medicine.

The Torah states that man was created in the image of God and teaches that his body is the property of the Creator. Since a person is given only custodial rights to his body and charged with being the prudent steward of his body, it would seem, the argument goes, that he would be required to accept medical treatment. This would seem to preclude the possibility of there being a meaningful concept of informed consent in Jewish law. This would also seem to suggest that Jewish physicians could not ethically offer their patients treatment that they do not believe to be the optimal choice.

Judaism requires a type of informed consent that is in some ways more stringent than its secular counterpart.

However this line of reasoning is not a correct description of the Jewish position! While the basis for the Torah approach may differ from that of secular society, Judaism does indeed require a type of informed consent that is in some ways more stringent than its secular counterpart.

The key distinction between the secular and the Jewish approaches to informed consent is the difference between rights and obligations. The secular emphasis on autonomy inescapably leads to the conclusion that the patient has the right to refuse any and all medical information. In Judaism, both becoming informed and giving consent for appropriate treatment are required. These requirements transform informed consent from a right into an obligation. From the patient's side, every person is obligated to actively guard his body and make medical decisions in a responsible way.

The Jewish patient's personal requirement of informed consent is akin to a money manager entrusted with the funds of a client. In this case, the client is God and the funds are the person's body. Just as the money manager must research all reasonable investment options before investing, so too the patient is obligated to investigate the medical options before acting. After accumulating the necessary information, the money manager MUST decide where to invest his client's money because that is his mandate. Only if he feels that all investment options are unacceptable for his client, based on sound reasoning, may he leave the money as cash.

The degree of autonomy that Judaism grants in any given case is directly related to the degree of certainty that exists among physicians regarding how a given illness should be evaluated and treated. Were medicine to be a monolith, with every problem having an obvious answer upon which all physicians agreed, then the individual would have little say in which medical treatments he wishes to have. All of the patient's research would necessarily lead to the same treatment option and he would be compelled to follow his physician's advice.

But in reality, most medical decisions are composed of multiple issues, including the social and psychological dimensions, each of which requiring evaluation and consultation. Only the most straight-forward problems have clear answers.

Some decisions are so obvious that the individual in reality has no choice. A person diagnosed with bacterial meningitis requires an antibiotic. Refusal to accept the medicine means almost certain death. The risk of ingesting the drug is only the very slim chance of a (usually treatable) allergic reaction. The prudent steward must accept the antibiotic once the medical reality is laid before him. If he refuses, Jewish law would allow us to coerce him to "voluntarily" consent to the treatment.

But how can coerced consent be valid? This is analogous to the reality of the American "voluntary" tax system that coerces one to voluntary fulfill his obligation to pay taxes.

But on a more fundamental level, we merely coerce him to fulfill his obligation of being the prudent steward. This concept is readily accepted by secular society. The concept that certain decisions are so irrational that society may step in and coerce the patient to pursue a specific course of action is well recognized within the mental health field and secular law. At some point, if a person is deemed to be a threat to themselves or others, they may be involuntarily committed to a mental hospital. A person who refuses antibiotic therapy for bacterial meningitis without a rational reason is a threat to themselves because they are not acting as a prudent steward in protecting their body from life-threatening illness

But what of the patient faced with hazardous surgery? There are many issues to be investigated and clarified before a judicious decision can be made. What are the possible risks? How long may the surgery be safely postponed? What is the expected outcome? Are there other reasonable options? Answering these questions represents the "informed" part of Jewish informed consent. But once all of the information has been gathered and assimilated, the patient must make a decision based on the facts presented to him.

Insight can be gained from a responsum written by Rabbi Moshe Feinstein, the leading halachic authority in the previous generation. He clearly accepted that patient input is crucial in medical decision-making. Only in cases where the treatment is obvious and unequivocal does he advocate coercion (though clearly not physical coercion). But in cases where the patient refuses treatment, he distinguishes between the patient who is afraid of the pain associated with efficacious treatment and the patient who does not trust the judgment of his doctor (Igros Moshe, Choshen Mishpat II:73e).

The physician is obligated to explain his or her assessment of the various options, but the final steward mandated to make the correct decision is the patient.

The former patient, who recognizes the appropriateness of the treatment but fears the pain, should be convinced to fulfill his obligation to receive the appropriate therapy. For the latter patient who distrusts the medical advice that he has received, we must find a physician whom the patient trusts in order to receive the patient's consent. This is because for the patient to properly perform his role as prudent steward of his own body, he must be convinced that the information that he has been given is accurate. This distinction drives home the concept that one is required to accept the rational therapy, but may refuse treatment until he is convinced that the proposed course of treatment is prudent.

We see from here that the physician is part of the Jewish consent process. The physician must provide the full range of options because the patient is the one who ultimately must decide on the proper course of action. The physician is certainly obligated to explain his or her assessment of the various options, but the final steward mandated to make the correct decision is the patient, not the doctor.

The constraints that Judaism places on informed consent are the same as those which it places on the rest of Jewish life. Judaism requires intellectual honesty in evaluating all options in life. One is required to honestly evaluate the options before him and make a decision based on logic, self-awareness, and Torah. Far from placing Judaism outside the pale of the "modern" approach to the physician-patient relationship, these principles should make us a model for those who desire a rational approach to the difficult area of medical decision-making.

Professor Hillel Furstenberg: In His Prime

A Lesson of Love

The Song of the Cat
For Every Individual, A Torah Scroll
Allegiance To The Monarch
Meet the Real You: Yom Kippur
Comments
MOST POPULAR IN Current Issues
Our privacy policy
Aish.com Is Looking for Great Writers