Everyone Else Is Doing It 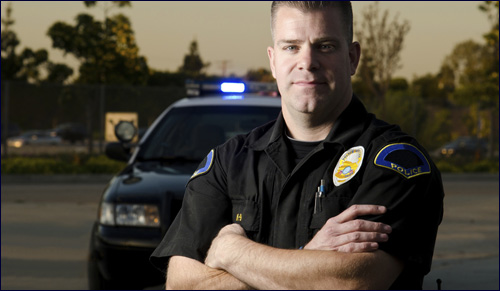 The police officer was in no mood for excuses. I was caught red-handed.

I did something illegal last year. The parking lot where a lot of us leave our cars is right at the corner of a one-way street and technically you aren’t supposed to back out onto the main road. You’re supposed to go out the right way even though it’s a bit longer and makes you wait at the stoplight on the corner. But everyone does it and apparently everyone’s been doing it for years since before I even moved into the community.

One night last year I was backing out of the parking lot and onto the main road – like I’d done a million times before – when I saw the lights flashing and knew I’d better get my story straight. I had my license and registration ready for the police officer but it was clear he didn’t have time for shenanigans. No time for “I have a clean driving record,” no “I’m a doctor and I have to get to the hospital because it’s an emergency,” and certainly no “I went to high school with Officer Callahan and we played lacrosse together.”

He laughed and asked me, “For what?”

“For driving the wrong way on the one-way street.”

“Because everyone else does it so often that I honestly forgot it’s illegal.”

He looked at my license again and then back at me before saying, “Just because everyone else is doing it doesn’t mean it’s a good idea to drive the wrong way. Don’t you know that it’s illegal because it’s dangerous?”

“Can you give me a break if I promise never to do it again?”

I was embarrassed. His arguments were flawless in their simplicity. I deserved the ticket he was about to write but then I had an idea and asked, “Can you give me a break if I promise never to do it again?”

“If that’s the case then I’ll wish you a good night and hope you’ll be safe. Remember that any friend of Officer Callahan’s is a friend of mine.” How he knew about Callahan is beyond me and I’d just as well take it without asking one too many questions.

Most people don’t start their day with a plan to do anything wrong, they just happen to fall into the trap of following everyone else. Nobody teaches their children that it’s ok to smoke cigarettes or to swear but once another kid in the neighborhood is doing it, suddenly parents are finding cigarettes outside on the porch and hearing all sorts of language they never dreamed of. Stealing from the corner store is clearly immoral but if friend from class is doing it then it’s hard for an adolescent to resist the temptation. Peer pressure is a powerful force!

The Talmud (Eruvin 53) relates a story about the power of peer pressure to remind us that even the greatest of people must be vigilant of this trap. While traveling down the road, Rabbi Yehoshua Ben Chananya took a shortcut through a field. On this path, he was approached by a young girl who asked him, “Isn’t this someone’s field that you’re walking across?” To this the Rabbi answered, “This is a well-worn path that I’m walking on.” The girl was not impressed and scolded him, “It’s a well-worn path because of thieves like you who didn’t respect someone else’s property!”

Peer pressure was a problem back then and it was problem 100 years ago when Rabbi Yosef Haim of Baghdad wrote in his book Ben Ish Chai, “It is a common thing amongst children to act improperly and say, ‘it’s the way of the world.’ The proper response to this is ‘it’s only the way of the world because immoral people are making it so.’” Peer pressure is still a problem and can make the brightest and most wonderful of people do ridiculous things – clearly it played a role when a local doctor was caught driving the wrong way down a one-way street!

So while changing the culture of the world may be a tremendous job, taking stock of one’s own actions is a bit easier. As we find ourselves in the Jewish month of Elul, preparing ourselves for Rosh Hashanah, it’s a proper time to assess whether our actions reflect our own wisdom or whether we are just doing something because everyone else is. As my mother would say, “Remember that just because your friends are doing it doesn’t make it cool.” No one wakes up and says, “Today I’m going to develop a Ponzi scheme because it’s only illegal when you get caught,” yet the most common rationalization we hear is some variation of Jimmy did it so why can’t I. I get it in my clinic every day when a husband justifies mistreating his wife or a mother defends bullying her child.

Ever since my brush with the law I’ve driven the right way on that one-way street, even though it takes longer. I can’t promise that I won’t slip up in the future but I am trying my best. I think Officer Callahan -- and the Almighty – would be proud.

How to Confront Your Mistakes and Try Again

Second Chances: The Powerful Month Before the High Holidays
It Takes A Lot Of Faith To Be An Atheist
How Instagram Brought Back This Nostalgic Soup
What Makes Eli Run?
Comments
MOST POPULAR IN The High Holidays
Our privacy policy