Europe Needs to Confront its Anti-Semitism 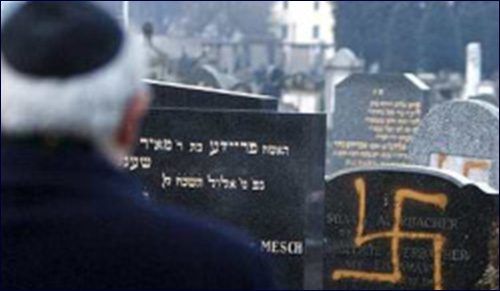 After Copenhagen, here are the next steps I wish Europe would take.

Once again, the jihadists have attacked, this time in Copenhagen.

Once again, they have murdered innocent people.

Once again, they have targeted both democratic values – freedom of speech and the press – and a minority community – the Jews.

And once again, Europe has been reminded that it is at the center, not the periphery, of this global challenge.

As a result, we will have all the right symbolic gestures, which I don’t wish to minimize.

There will be visits to the synagogue, solidarity events, statements of anguish, and affirmations of collective will and determination.

But will they really change anything on the ground? That remains to be seen.

With each such bloody outrage, we earnestly hope that something might be learned because we don’t want to believe that history must continue to repeat itself in this all-too-familiar cycle of killings, vigils, and mourning.

And yet, after 15 years of engaging with European leaders to get their attention, help them understand what stares them in the face, and press for sustained action, I’m not quite ready to bet the family farm that the day after tomorrow will be all that different than the day before yesterday.

Even so, I desperately want to believe that Europe, with all its dazzling achievements since the end of World War II, can still strengthen its resolve, stiffen its spine, and fully understand the stakes involved, however late in the day it is.

Here is what I wish would happen now.

First, the European Union should quickly organize a high-level conference to discuss the rise in anti-Semitism, as evidenced by repeated terror attacks, EU polls showing rising fear among Jews, and statistics in countries like France and the United Kingdom revealing a major spike in anti-Semitic incidents. It ought to discuss and adopt a comprehensive plan of action, and then implement and monitor it.

Second, European leaders must understand, as French Prime Minister Manuel Valls has, that anti-Semitism is not only an attack on Jews, but also an assault on Europe and its values. The two cannot be separated. That was amply illustrated in the attacks in Paris last month and in Copenhagen this month. In the end, if there is no other choice, Jews will leave Europe, but where will Europe go, unless, that is, it is prepared to succumb to the jihadist threat?

Third, call a spade a spade. For many Europeans, there is no hesitation in identifying the source of anti-Semitism when it emanates from right-wing extremists. But when anti-Semitism, including deadly violence, springs from within a segment of the Muslim population, verbal acrobatics all too often come into play. If you can’t name the adversary, how can you effectively fight it?

Of course, this problem is not unique to Europe. In the United States, we saw the massacre at Fort Hood ludicrously labeled “workplace violence” rather than the jihadist violence it so obviously was, and our government’s refusal to refer to “Islamist” or “jihadist” terrorism, even when the perpetrators themselves do.

Fourth, stop tying anti-Semitism to Islamophobia, as if the two are Siamese twins. AJC’s Brussels office has been trying for months to encourage a European Parliament hearing on anti-Semitism, only to be met with insistence that any such meeting include Islamophobia. Why this demand to join the two together, when the majority of incidents occurs against Jews, when Europe has a particularly ugly history of anti-Semitism, and when the principal attackers of Jews invoke their Islamic faith?

Fifth, recognize that we confront both a short- and long-term menace that won’t be overcome by even the most eloquent of speeches and the most symbolic of acts. Rather, it requires a full-court, sustained effort by individual governments (and, of course, by the EU) using the resources they have the capacity to mobilize, joined by the determined efforts of civil society.

Sixth, connect the lessons of the Holocaust to the present-day threat to the Jews. I’ve witnessed too many Holocaust-related events where murdered Jews are mourned – Jews who, tragically, cannot be brought back to life – but that totally ignore the current dangers to living Jews. A refusal to connect the two quite frankly empties these commemorations of much of their meaning and sincerity.

Seventh, don’t apologize for European values of democracy, human dignity, openness, and pluralism. Europe has built something to be proud of and that is well worth defending. It is, after all, to Europe that refugees and immigrants are seeking to go by any means possible to escape failed or failing societies, and not the other way around. It’s high time to stand up in defense of these noble values and do everything possible to ensure that newcomers embrace them as well.

And last, but by no means least, it is important to understand that the jihadist barbarism which Europe is experiencing first-hand is not much different from what Israel has been facing for decades. Why, then, does Europe continue to try drawing a distinction, when, in reality, none exists? The same jihadists who hate Europe detest Israel, and the same jihadists who wish for Israel’s annihilation aspire to no less for Europe as we know it.

Since hope springs eternal, here’s hoping for the dawning of a new day, starting right now.

“Covid Rage” and the Breakdown of Civil Behavior
Korach 5782: Visit to Lift the Spirit
That Time The Ivy League Found A Way To Limit Jewish Enrollment
Would You Rather Be Right or Happy?
Comments
MOST POPULAR IN Current Issues
Our privacy policy