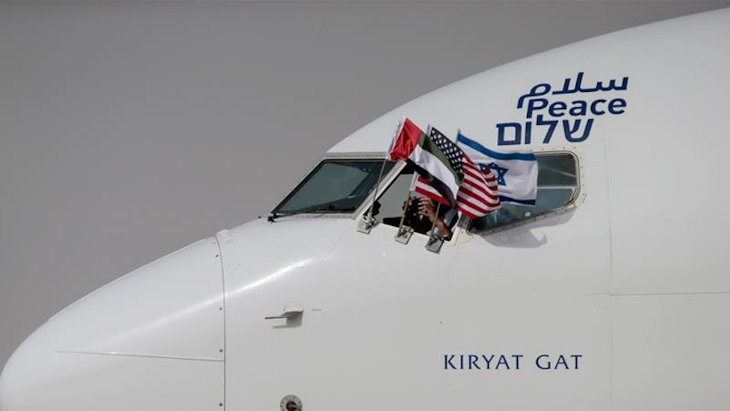 It's encouraging to see prominent Arab thinkers – and the first Arab government in more than 25 years – rejecting the old rancor, and enumerating the gains peace can make possible.

“In a historic milestone, an Israeli passenger plane flew through Saudi Arabian airspace Monday on the first direct non-cargo flight between Israel and the United Arab Emirates,” The Times of Israel reports yesterday. “El Al Flight 971, carrying high-level Israeli and US delegations, flew southeast down almost the entire length of Saudi Arabia to reach its destination in Abu Dhabi. It was the first time an Israeli plane was given permission by the kingdom to use its airspace.”

The times, they are a-changing.

Coverage of the agreement to normalize ties between Israel and the United Arab Emirates has focused largely on the historic démarche of a Gulf Arab country making peace with the Jewish state, and on the irrelevance of the Palestinian-Israeli conflict to the deal. Not enough attention has been paid to what the UAE expects to gain out of establishing normal ties with Israel. Abu Dhabi, after all, isn’t breaking with the decades-long Arab refusal to accept Israel’s legitimacy merely to make a point about the brotherhood of mankind.

To be sure, there is interest in drawing closer to Israel because of its resistance to Iranian aggression, which is a threat to the Sunni states on the Arabian peninsula just as it is to Israel. But don’t lose sight of the economic factors at play.

Since petroleum prices crashed in 2014, the Gulf’s oil riches haven’t been nearly as fabulous as they once were. The coronavirus pandemic accelerated oil’s decline; the UAE is looking at a fall of 30% or more in its petro-revenues this year. The world will eventually get back to normal, but oil revenues in a world increasingly reliant on natural gas and renewable energy are likely never to reach the heights they once did.

The Gulf oil states know their future lies beyond oil, and are making a concerted push to expand tourism and technology. “Dubai, which has been running low on oil for a long time, is the furthest along of all,” reports the Israeli newspaper Haaretz. “It gets only a tiny percentage of its GDP from petroleum; the rest comes from serving as a global logistics, financial, and aviation hub, as well as property development.”

Especially when it comes to high tech, science, and defense, no country in the region can provide the UAE with the scientific know-how and research sophistication that Israel can. And leading voices in the Emirati media are saying so, as a recent dispatch by MEMRI, the Middle East Media Research Institute, makes clear.

“We have much to learn from the Israeli experience,” wrote Yousuf Al-Sharif in Al-Bayan, a popular Arabic newspaper in Dubai. His admiration for Israel borders on fulsome:

In the 70 years since it declared its independence, Israel has faced many challenges: the challenges of establishing a state . . . and of maintaining its security amid this historic conflict. This is experience we can benefit from and study in depth, putting aside our emotions and sympathy for one side at the expense of the other. The fact is that Israel has excelled at [maintaining its security]. . . . Israel has strategic military and defense plans that allowed it to stand fast throughout this period, despite wars . . . which almost threatened its existence. We should benefit from this experience and plumb the secrets that led to its [successful] outcomes.

In recent years, the world has suffered continent-spanning terror, with bombings and terror attacks reaching many countries across the globe. Many advanced countries in Europe failed to protect their cities and citizens. . . . Israel's general and military intelligence apparatus is one of the strongest in the world, and it possesses military technology that it developed extensively over the years. . . . But this technology never reached our Arab countries and we did not benefit from it, although we desperately need it in light of the ongoing threats. . . . We must be realistic and [acknowledge] that Israel and the Israeli companies working in this field are more advanced than other companies around the world and are several steps ahead of them. This means that we can derive a lot of benefit from [ties with Israel] in the coming years.

Even more enthusiastic is Manahel Thabet, a economist and consultant from Yemen who lives in the UAE. She also writes in Al-Bayan:

Israel spends about 4.7% of its national income on scientific research, and its universities score high in global rankings… It has 55 institutions of higher education, including eight universities…

Scientific research in Israel focuses on the fields of computers, the information industry, the software industry, nuclear science and technology, the study of space and its applications, and biological and medical technology. . . . Israel leads the world in production and research. Israeli researchers have published 138,881 well-conducted studies in scientific journals. . . . As for [Israeli] patents, they are the most blatant indication of the gap between the Arabs and Israel, which has registered about 16,805 patents.”

Thabet hails “the wise leadership of the UAE” for overcoming the anti-Israel “complex” that still plagues much of Arab society.

Plainly, attitudes are evolving. An Arab boycott of Israel that for decades seemed implacable is increasingly falling out of favor with Arab thinkers, diplomats, and journalists who have come to see it as counterproductive. In the New York Times last November, correspondent David Halbfinger reported on a “new group of liberal-minded Arab thinkers from across the Middle East who are pushing to engage with Israel on the theory that it would aid their societies and further the Palestinian cause.” Members of the group share a view that isolating and demonizing Israel has cost Arab nations billions in trade. They say it has also undercut Palestinian efforts to build institutions for a future state, and torn at the Arab social fabric, as rival ethnic, religious, and national leaders increasingly apply tactics that were first tested against Israel.

Among the group’s organizers is someone with a famous name: Anwar Sadat, the nephew and namesake of the Egyptian president who signed the first Arab peace treaty with Israel. Another organizer, Mustafa el-Dessouki, is the managing editor of an influential Saudi-funded newsmagazine. He told Halbfinger that he meets more and more Arabs who share his view that their governments’ hostility to the Jewish state is primitive and passé and who “actually want to connect with Israelis.” Granted, that is still a minority view in the Arab world. It will take a while for it to spread widely among the Arab and Muslim grassroots. But the UAE’s rulers, attuned to the benefits closer ties with Israel can generate, aren’t waiting for grassroots approval – and other Arab leaders, if they are wise, will follow suit.

The British historian Paul Johnson suggested once that antisemitism – which has fueled the Arabs’ commercial and diplomatic animus toward Israel – should be seen as a kind of intellectual disease , fundamentally irrational and highly infectious. It exerts great self-destructive force, Johnson argued, severely harming countries and societies that engage in it. In a pattern that has recurred so predictably that he dubbed it a “historical law,” nations that make Jewish life untenable condemn themselves to decline and weakness.

It was true of Spain after it expelled the Jews in 1492, wrote Johnson, true of czarist Russia’s anti-Jewish repression, and true of Nazi Germany’s descent into demonic Jew-hatred under the Nazis, which led to a cataclysmic military defeat and a Cold War rupture that lasted half a century.

It has likewise been true of the “100 million or more Arabs, marching under the banner of antisemitism” all these years. Long steeped in Jew-hatred and obsessed with Israel, the Arabs squandered vast oil riches “on weapons of war and propaganda… In their flight from reason, they have failed to modernize or civilize their societies, to introduce democracy, or to consolidate the rule of law.” Arab culture once led the world in learning, innovation, and pluralism. Today it is a world leader in almost nothing, save fratricidal violence and Islamist fanaticism.

Shunning and demonizing Israel for so long gained the Arab world little. It is wonderfully encouraging to see prominent Arab thinkers – and the first Arab government in more than a quarter-century – rejecting the old rancor, and enumerating the gains peace can make possible. May those gains proliferate and become evident to all, and may Abu Dhabi’s leadership in making peace with Jerusalem be emulated across the Middle East.

Missing in Action
The Softball Player
How This 6 Generation Bread Baker Brought Back Israel’s Ancient Grains
Olivia Newton John’s Grandfather was a Nobel-Prize Winning Jewish Physicist
Comments
MOST POPULAR IN Israel
Our privacy policy
Aish.com Is Looking for Great Writers