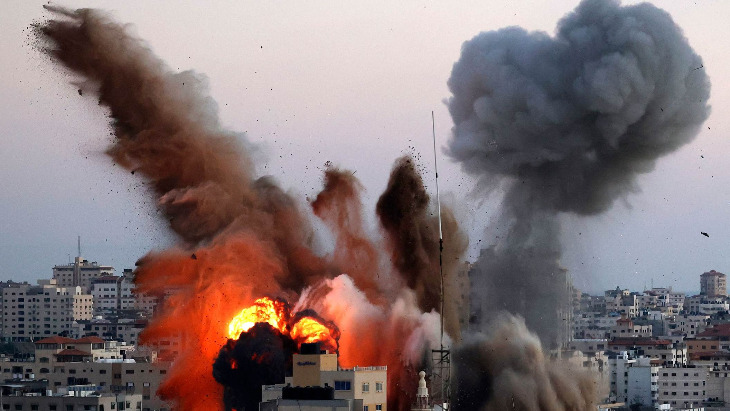 It is inappropriate to posit moral and legal parity between the two sides. In all cases Hamas was the aggressor.

As of this writing, the relationship between Israel and Palestine has taken perhaps its most dangerous turn since the Israelis made their controversial decision to leave Gaza in August 2005. To my mind, that agonizing decision was, at the time, the lesser of two evils. For Israel to govern Gaza, which had only around 8,500 Jewish settlers, the Israelis ran the risk of becoming a hostile occupying force with little or no local legitimacy. Using powerful force to respond to concerted attacks from Gaza after pulling out was the better alternative. Once Hamas took over Gaza in 2007, it quickly initiated military attacks on Israel in 2008, 2012, and 2014, with large losses of life on all sides.

In this instance, as in all others, it is inappropriate to posit moral and legal parity between the two sides. In all cases Hamas was the aggressor. It is a moral blunder to equate Israel’s targeted self-defense with Hamas’s aggression. To be sure, in practice there are often complex ethical that challenge the imagination, but the key to understanding Gaza is to avoid the mistake of assuming that any balance in the number of deaths and casualties offers evidence of moral equivalence between Israel and Hamas. As Bret Stephens recently wrote in the New York Times, the moral imbalance between Israel and Hamas looms as a huge obstacle to any two-state solution in the Middle East.

Key to understanding Gaza is avoiding the mistake of assuming that any balance in the number of deaths and casualties offers evidence of moral equivalence between Israel and Hamas.

So long as Hamas is active, the Israelis cannot afford to deploy the same strategy of calculated withdrawal on the West Bank that they used fitfully in Gaza. Gaza can be isolated by land and sea. The West Bank, however, borders Jordan, through which other Israeli enemies like Iran and Syria can easily set up hostile military positions close to both Jerusalem and Tel Aviv.

The current round of rocket attacks from Hamas quickly led to additional violence inside Israel itself. In dealing with these disputes, it is easy forget the consistent pattern of Hamas and Palestinian aggression, and instead to simply plead for the violence to stop, with no moral judgments either way. Unfortunately, the US Department of State did just that in its response: “There is no excuse for violence, but such bloodshed is especially disturbing now, coming as it does on the last days of Ramadan.” The reference to violence on Ramadan at the Al-Aqsa Mosque on the corner of the Temple Mount regrettably misstates the relevant issues, given that Palestinians had stockpiled rocks to initiate violence, to which the Israeli police then responded with stun grenades. It should be especially disturbing that Palestinian youths used the holy month of Ramadan to launch military attacks. But sadly, the State Department critique makes it appear as if the Israelis had engaged in an unprovoked use of force at that sensitive location, which in turn precipitated further denunciations of Israel by key Arab nations.

The State Department then gave a further boost to the Palestinian position by urging “authorities to approach the residents of Sheikh Jarrah [in East Jerusalem] with compassion and respect, and consider the totality of these complex historical cases and how they impact real lives today.” At no point does this statement give any indication as to the source of the Sheikh Jarrah quarrel in question.

This editorializing was even more one-sided in the press. Nicholas Kristof wrote in the New York Times that the “recent fighting was prompted in part by Israel’s latest land grab in East Jerusalem, part of a pattern of unequal treatment of Palestinians,” which led to his recommendation that the United States condition its military aid to Israel “on reducing conflict, rather than aggravating it,” without ever saying how that could be done.

Kristof’s reporting suggests the Israelis had evicted Palestinians from their ancestral homes by brute force to expand the Jewish footprint in East Jerusalem. But, to the extent the current conflict involves eviction, it is in the context of a highly charged landlord-tenant dispute. As reported more fully by Steve Postal in the American Spectator, the land in question had already been purchased by Jewish communities in 1875 from its Arab owners and registered in the name of two Jewish rabbis at the time of purchase. Jordan took the land by force during the 1948 War of Independence; however, the land was reregistered in 1973 after Israel retook East Jerusalem in the 1967 war. From then on, the land was rented out to Palestinians on condition that they pay rent – when the rental payments ceased starting in 1993, the Israelis sent eviction notices. By 2021, an Israeli court allowed the evictions to take place if the nonpayment of rent did not end – hardly a novel innovation in landlord-tenant law. And the entire matter is now going before the Supreme Court of Israel.

Calling this train of events a “land grab” is an inexcusable travesty, and in no way provides a casus belli to Hamas or other Palestinians that justifies the use of deadly force. Yet Kristof, among others, compounds the error by downplaying that the attacked locations had “a Hamas presence” – i.e., their main headquarters – and doesn’t bother to note that the Israeli attacks were in response to the launch of about a thousand rockets into Israeli territory, many of which reached the suburbs of Tel Aviv, resulting in casualties and serious property damage.

In this instance, there was no provocation for the Hamas attacks.

So much of the battle between Israeli and Palestinian interests depends on who can take the high ground in the moral debate. On the merits, this case should be easy. In this instance, there was no provocation for the Hamas attacks. And it is furthermore mistaken to criticize the Israeli response as being a form of “racist nationalism,” as did Senator Bernie Sanders. Such mischaracterizations only work to strengthen the misguided arguments of moral equivalence between indiscriminate attacks on civilian populations and targeted efforts of self-defense. The Israelis are trying to cope with an adversary in Hamas that is willing to use its own people as human shields to protect missile installations from counterattack, installations that are often located in hospitals and schools.

These tactics are difficult to overcome. The law of self-defense countenances the use of all feasible measures to avoid collateral damage on civilians. But by the same token, the cautionary warning against civilian casualties cannot be read so broadly as to allow Hamas to fire on Israel so long as it is willing to dragoon its own citizens into a position of peril. In dealing with these situations, it is unwise and mistaken to criticize Israeli tactical mistakes – of which there will be some – while overlooking the inexcusable use of indiscriminate and deadly force that provoked Israel’s use of force.

It is also important not to fall into the trap of thinking that the wrongs of Hamas and the Palestinians today are excused in light of past Jewish misdeeds. Peter Beinart, writing in the New York Times, advises that “Jews should understand” that crimes of the past do not remain in the past, and argues that past wrongdoing supports a Palestinian right to return to Israel. Yet this line of thinking is hopelessly one-sided, as it does not address the long history of Arab criminal aggression that started even before the Arab invasion of the new state of Israel in 1948, violence that has continued ever since. Hundreds of thousands of Jews have been forced out of their homelands in other Middle Eastern countries and are now in Israel, making a return for them neither possible nor desirable.

Beinart insists that if Jews can build houses for Russian immigrants, they can do the same for Palestinians, ignoring what sworn enemies of Israel will do once admitted to Israel in large numbers. His “modest” proposal could end the Jewish state as we know it, given the massive shifts that it would augur in political and military power.

Letting claims of past injustices fuel current acts of violence will only expand the list of unsettled grievances, producing never-ending rounds of violence. There is a better way. It depends on starting to build trust between Arabs and Israelis through low-level business and social interactions. Such ground-level social cohesion is the only hope of ending the senseless cycle of Middle East violence. Sadly, by continuing to advance the false narrative of moral equivalence, the Biden administration’s position serves only to perpetuate the chronic violence in the Middle East.

This article originally appeared on the website of The Hoover Institute.

Richard A. Epstein, the Peter and Kirsten Bedford Senior Fellow at the Hoover Institution, is the Laurence A. Tisch Professor of Law, New York University Law School, and a senior lecturer at the University of Chicago.

I Grew Up Denying The Holocaust, Then I Led A Trip To Auschwitz