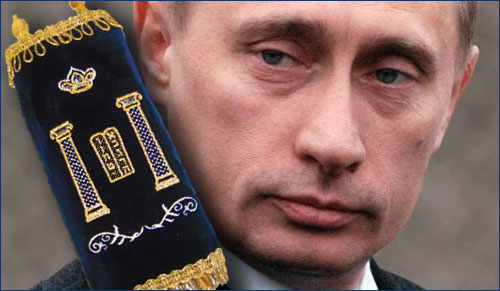 Rejoicing with the Torah because it is an exceptional book that has made us exceptional.

Till now the best definition of chutzpah was probably that given by Leo Rosten in his classic work, The Joys of Yiddish: “Chutzpah is that quality enshrined in a man who, having killed his mother and father, throws himself on the mercy of the court because he is an orphan."

In the aftermath of the by now infamous op-ed piece in the New York Times by Vladimir Putin, the Russian President might well be a serious contender for the title.

Speaking out strongly against a possible military response by the United States against his Syrian ally for the monstrous crime of using internationally forbidden chemical weapons, Putin dons the mantle of ethical advisor to offer us what he calls “A Plea for Caution from Russia.” Head of a regime known for its indifference to human life, its support of totalitarian dictatorships, and its history of hostility to religion, Putin has the gall to close his piece by reminding us that “when we ask for the Lord’s blessings, we must not forget that God created us equal.”

The man who has been providing heavy weaponry to Assad’s regime, the better for them to batter towns and villages filled with civilian women and children, and who has systematically blocked any UN Security Council action – even to reprimand Syria for its many wanton crimes – feels no shame as he offers hypocritical pieties. Sanctimoniously, Putin claims to stand variously with the Pope, those who honor international law and seek regional stability, human rights activists and peace-loving people throughout the world. Perhaps the only thing missing from his piece is a reminder to those who might publicly disagree with him that their fate might be the same as that meted out to the members of the feminist punk band who were imprisoned for being insufficiently respectful to the Russian leader.

Reaction to this highly unusual op-ed was almost unanimously negative. Vice President Biden spoke for many when he said it “made him want to vomit.” But one point Putin made did strike a chord. For those who live by the ideal of political correctness it served to open a widely disseminated discussion. Perhaps, comes the voice of the naïve swayed by beautiful sounding platitudes, Putin was correct when he criticized President Obama for putting forward the idea of American exceptionalism.

“It is extremely dangerous,” Putin wrote, “to encourage people to see themselves as exceptional, whatever the motivation.” Exceptional means better. And that idea – the idea that some people can rise above others by dint of hard work, uncompromising commitment to personal growth and steadfast adherence to sacred values – seems anathema not only to communism but to many who live by the creed of cultural relativism.

For them nobody is better than anybody else. No people have greater claim to moral superiority than any others. Exceptionalism is a dirty word.

Jews need to take pride in the fact that it has been our Torah that served to civilize the world.

As politically incorrect as it might be to say it, we need to remember that exceptionalism is the key to civilization, and we Jews need to take pride in the fact that it has been our Torah, our teaching of morality and ethics that served to civilize the world.

Emmanuel Kant did not hesitate in expressing the exceptionalism of the Jews and the Jewish Bible: “The existence of the Bible as a book for the people of the world is the greatest benefit which the human race has ever experienced. Every attempt to belittle it is a crime against society.”

The Catholic writer Thomas Cahill was so overwhelmed by his study of the Jewish contribution to world civilization that he authored what proved to become an international bestseller, The Gifts of the Jews. The Jews, he concluded, literally transformed the world.

The Jews not only discovered monotheism, but they then explained why that made God different from all the pagan gods worshiped until that time. The Jewish God is above nature; witchcraft and sorcery simply have no meaning for Jews. Such practices suggest that humans can manipulate God. A God who can be manipulated is made in man’s image. Jews believe the reverse, that man is created in God’s image.

Cahill believes that the ultimate breakthrough in humanity’s understanding of God came with the Jewish perception that God “is a real personality who has intervened in real history, changing its course and robbing it of predictability.” God is more than the Force of Star Wars; he is the “I” of the first commandment: “I am the Lord your God who took you out of the land of Egypt, the house of bondage.” God interacts with man and intercedes in history.

The Jews not only introduced the world to God but to his book as well. The Torah, transmitted from Moses to the Jewish people, has nurtured Christianity and Islam, Judaism’s two daughter religions. Its teachings provided the soil for democratic ideals and the seeds of Western civilization.

From the Torah, Cahill explains, the world learned the meaning of spirituality. Pagan gods, being physical, wanted physical things from their worshipers. Not so the God of the Jews. As Cahill puts it, “God wanted something other than blood and smoke, buildings and citadels. He wanted justice, mercy, humility. He wanted what was invisible… There is no way of exaggerating how strange a thought this was… The word that fall so easily from our lips – spiritual – had no real counterpart in the ancient world.”

That is why the Bible continues to be the world’s biggest best-seller. And that is why we have a special holiday dedicated to rejoicing with the Torah, Simchat Torah.

We rejoice with the Torah on Simchat Torah because it is an exceptional book that has made us exceptional – and if that bothers President Putin, perhaps that gives us all the more reason for celebrating.

Up Against the Wall: The Remarkable Odyssey of Arye Steinberger’s Sukkah Art
It Takes A Lot Of Faith To Be An Atheist
How Instagram Brought Back This Nostalgic Soup
What Makes Eli Run?
Comments
MOST POPULAR IN Israel
Our privacy policy