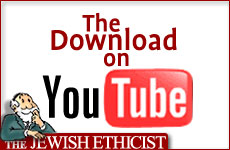 Q. A lot of copyrighted material is available on YouTube and other free sites. Is it permissible to download these clips?

A. YouTube was conceived primarily as a site where ordinary people could upload personal creations for public viewing. However, from the very beginning commercial content also made its way onto the site. This content is of a few varieties:

1. Some content is intentionally or willingly placed by content owners as a promotion. For example, CBS has a partnership program with YouTube through which some of their material appears on the site. It is obvious that there is no ethical obstacle to enjoying this material.

2. Some content is surreptitiously put up in order to circumvent copyright owners. Copyright owners have the right to protest at any time if they find their material on the site and it is promptly taken down. But realistically, there are hundreds of millions of clips and it may take time to detect and remove them. In the meantime, a viewer may find clips which he can be sure are copyright material. Here also the answer is obvious: a person shouldn't download stolen content just because he managed to squeeze in between the time it was illegally uploaded and when it was removed.

3. Some content the copyright owners have just given up on. Because of the effort involved in flagging pirated content, and the additional effort involved in removing it if the poster claims that it is legal (for example, under fair use laws), content owners are compelled to choose their battles and concentrate on their efforts on the most serious breaches. Here we have an interesting ethical question.

Rabbi Yehoshua ben Chanania said: In all my days, no one ever get the best of me besides one woman, one boy, and one girl. . . . What of the girl? Once I was traveling on the way and there was a path through a field, and I was walking on it. A little girl said to me: Rabbi, isn't that a field? I said to her, "No, it is a cleared path." She said to me, "Bandits like you cleared it." (1)

Rabbi Yehoshua ben Chanania was correct. At the time he traversed the field, the way was already a cleared path and did no damage to the crops. However, the girl was also correct. There was a first person who went through the field. That first person did only slight damage to the crops. He probably didn't think of himself as a "bandit". But the next time a person wanted to take a shortcut, that person noticed that someone has already cut through this field, and there was a way that was a bit easier, and a bit less destructive, than cutting straight through the crops. The second person would probably never have dreamed of just stomping through someone's field, but after all, now there was already a passage and besides, someone else had already been through..

By the time Rabbi Yehoshua went through, there was really no benefit from refraining, yet formally speaking he was the latest in a series of trespassers who effectively stole that piece of land from the field's owner (presumably the girl's family).

I don't think that the passage is suggesting that Rabbi Yehoshua did something actually forbidden. In the other stories (the woman and the boy) he does things which are insensitive but not quite improper. But it reminds us how often we may be beneficiaries of wrongdoing, and in particular reminds us how serious the first, seemingly innocent breach is.

Once a video clip is firmly ensconced on YouTube, it is fair to assume that it is legal, and you can view and download it (if there are no notices to the contrary). However, the Talmudic sages alert us to the particular seriousness of leading the charge by pushing out the envelope of infringement, for example uploading material which previously was taken down but right now finds the owners too busy or burdened to respond.

The Jewish Ethicist: Ethics and Sportsmanship

The Jewish Ethicist - Off Target

The Jewish Ethicist: In Case of Emergency