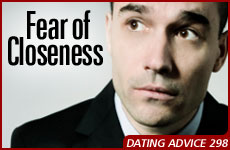 Every time they get closer, he pulls back.

I've been dating a man for the past three months. He's is truly a wonderful person and I can see myself building a life with him. However, every time we have a very good date, in which I feel we've really connected, I don't hear from him for at least a few days. Once he calls, he doesn't mention our last date or what we've talked about, and then when we go out the next time it feels that we're beginning to get to know each other all over again.

This has happened at least four times in the past three months. How will we ever go forward if this keeps happening? Please help. I really like this man and I don't know what to do.

We're glad that you wrote to us, because your instincts are right on the mark. It sounds to us like this man is encountering some sort of internal conflict each time the two of you take a step forward in your relationship. Whenever you have a deep conversation in which you share your feelings or personal experiences or thoughts, he seems to take a step backward by avoiding you for several days and by not talking about your last date when you finally get together. It seems as if he struggles to get closer to you emotionally, but once he does he has to retreat because he doesn't know how to deal with the closeness.

We call this pattern “approach avoidance.” Every time your dating partner becomes emotionally intimate, it frightens him and he pulls away. Sometimes, people long for emotional closeness, but after they open up to another person they are uncomfortable with their own feelings and have trouble processing them. Or, they don't know what to do next after they've shared personal information with the person they are dating. They could be afraid of how their date will react -- will they be accepted, questioned, ridiculed?

They may have observed a tumultuous relationship in their own family.

There are many possible reasons why someone would move forward and then take several steps back. They could have been hurt in a prior relationship, when someone took advantage of their vulnerability, and retreat each time they feels they’re becoming too emotionally involved as a protection against getting hurt again. They may fear that emotional closeness is another step toward marriage -- which they're afraid of. They may have observed a tumultuous relationship in their family and fear that this could ultimately repeat in their own life, so they back off when they see the relationship progressing. Or, they could have low self-esteem and doubt that anyone would want them once they discover the person they really are.

Sometimes, when a person becomes aware that he engages in a pattern of approach avoidance, he can look into his own background, explore the feelings he experiences each time he feels like retreating, and push forward by acknowledging those feelings and taking baby steps to overcome them. We have found that this is difficult for most people to do by themselves. They can benefit from the help of a therapist or a qualified life coach who has psychological training.

So what do you do to help the man you're dating address his problem with approach avoidance? It's important to raise the issue as soon as possible, meaning within the next couple of dates. It has to be at a time that you feel the date is going well and both of you have the emotional energy to have another deep conversation.

We suggest beginning with something such as, "I enjoy our dates very much, and I've noticed something I'd like to talk to you about. I like that we've had some really good conversations, and I feel we've learned a lot about each other through them. But I'm a bit puzzled, because it seems to me that each time we have a deep conversation, you seem to retreat a little bit. It feels like on our next date, we have to warm up to each other all over again. I wonder what's going on."

The man you are dating may or may not be aware that he's been doing this. This introduction is a non-confrontational way of pointing it out to him and encouraging him to think about what's happening. It lets him know that you've noticed a pattern and would like to understand it.

Once you’ve shared your observations, he may simply say, "You know, you're right. I never realized I do that," or he may go a little further and talk about what he's been feeling. At either of these points, we suggest that you respond by saying, "It sounds to me like this might be something you'd want to understand more... perhaps by looking into it on your own or with someone you feel comfortable talking to, like a mentor or a professional." If he expresses an interest in doing this, you can express your encouragement or emotional support.

Do not personally get involved in helping him work through this issue.

But we don't suggest that you personally get involved in helping him work through this issue. If you begin to act like his mentor or "therapist," you'll disrupt the balance in your developing relationship. If it continues to grow, you'll want to relate to each other as partners, not as a teacher and student, mentor and protégé, or therapist and client.

We haven't yet discussed the possibility that this man disagrees with your observation, or has difficulty reacting to it. That might mean that he feels uncomfortable talking about the subject with you, or that he isn't ready to deal with his emotions. Nevertheless, here, too, we recommend that you suggest he think about what you've said and consider exploring it further.

In any case, it is important for him to understand why he is approach-avoidant and to address his situation. Until he does, this pattern will continue, and it is unlikely to change no matter how long you continue to date each other. Eventually, it will erode the foundations of the relationship you're trying to build. The ability to share thoughts and feelings is a benchmark of a healthy, emotionally close relationship.

This issue is resolvable, but like anything the first step is becoming aware of the problem, acknowledging that it requires fixing, and then seeking help in working it through. If he does not do this, then either you will become frustrated by his failure to address his concerns and fears about emotional intimacy, or he will have difficulty staying in the relationship and moving it forward toward marriage.