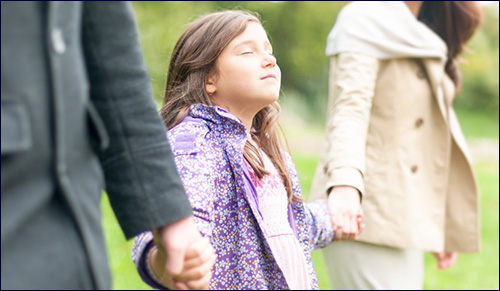 Parenting and counting the Omer.

Years ago, when I was first starting my career in education, I taught a girl in her last year of high school. She was a doctor’s daughter, came from a good family, had many friends, earned excellent grades and did not behave with chutzpah. One night she was arrested along with her college-age boyfriend when he sold narcotics to an undercover police officer.

I found out the next day at school and was shocked. I also discovered that her parents, who could certainly afford to bail her out of the county jail, had chosen not to do so and, rumor had it, they were not even going to visit her.

Her parents were not going to bail her out or visit her.

I was floored. I was a young teacher, not yet a parent, and I was working towards my Masters degree in counseling at the time. I began to visit my student in jail, bringing her books and homework as an excuse to spend time with her and talk to her during what turned out to be a two-week stay behind bars.

Behind the scenes and unbeknown to their daughter or me, the parents were struggling to do the best thing for her. They were consulting night and day with professionals and had retained a good attorney who was later able to successfully argue that their daughter deserved probation for this first-time offense, given her age, her clean record, and, as I recall, the undercover police officer’s confirmation that she was not part of the sale. She was able to return to high school and later attended university.

Over the years, I have thought about this girl and her parents many times, and I have concluded that the parents had made the right decision. They had managed to strike the right balance in a very complex situation to help save their daughter’s life.

How many parents could have done what hers did? Most of us would have reacted with the love and tears. Our natural reaction would have been to visit our daughter every day in the jail – to make sure she was eating properly, wasn’t too hot or too cold, and knew how much we loved her. Some of us would have been programmed to only focus on the good in our daughter, ignoring the “elephant in the room” – the fact that our daughter chose a drug-dealer for a boyfriend and indirectly participated in his criminal activities. But any parent who reacted in this manner would have been in total denial. And at a time like this, coddling may not have been the most constructive way to help a young woman in her formative years.

Alternatively, some of us might have harshly disciplined our daughter. We might have taken the position that she broke the law and deserves whatever punishment the law calls for. She doesn’t deserve us as parents. She showed a complete lack of regard for us by what she has done and, therefore, she has lost us. Let her have a public defender. We are not going to deal with this.

Fortunately for my student, her parents chose to do something far wiser. They may have vacillated between these two extremes in their private discussions, as they traveled on the roller-coaster of resolving the crisis. But instead of choosing either love/kindness or discipline/restraint exclusively, they found a way to blend their deep love and concern for their daughter with the realization that she needed to learn a few lifetime lessons from this incident. They sought professional guidance to figure out what message their daughter needed to hear in order to help her decide on her own to make the necessary changes in her life.

Her parents struck the right balance of love and discipline.

I imagine that they had to work hard to restrain both their desire to protect her with an outpouring of love, as well as their desire to scream at her in anger and frustration (not to mention disappointment and sadness).

They demonstrated a far more thoughtful reaction by striving to achieve the right balance of love and discipline, acting in the best interest of their daughter. In the short run, she may not have liked sitting alone in a cell in a county jail, but in the long run, this strategy saved her life.

I often think back to those parents during the seven weeks between the holidays of Passover and Shavuot – a period of time which is known as Sefirat HaOmer, the Counting of the Omer. During this time, we try to improve our character traits. Each week we work on different trait – week one: chesed (love/kindness); week two: gevurah (discipline/restraint); week three: tiferet (harmony/balance); week four: netzach (determination/endurance); week five: hod (humility/thanksgiving); week six: yesod (foundation/bonding); and week seven: malchut (dignity/nobility). And each day we examine that trait in combination with the others.

The parents in the above story always seemed to me to be the perfect example of tiferet sh’b’ gevurah – harmony/balance combined with discipline/restraint.

Tiferet sh’b gevurah leads us utilize discipline/restraint (first and foremost) with the appropriate amount of harmony/balance to take correct action in any given situation involving our families. Tiferet sh’b gevurah allows us that to demonstrate that we care, that we are willing to contribute time and efforts to help our loved ones achieve their fullest potential, while at the same time dealing constructively and effectively with any negative behavior.

It takes wisdom, patience and humility to know how to achieve this, but it is essential. Tempering discipline with harmony produces a balanced response that ultimately is best for all concerned.

These are just some of the parenting solutions and tools found in the Torah. The 49-day Omer count offers a “firewall” to protect our families from these dangers while, at the same time, enhancing our lives. God’s antidote for what ails us is the amazing spiritual gift of counting and understanding the context of each day’s count, specifically internalizing the seven traits and their 49 combinations – which God employed when He created the world. The family that communicates and devotes time to discussing together the importance of each day’s Omer count (and the corresponding trait combination) will inevitably become closer, stronger, happier, calmer and more balanced.

Allow me to suggest some topics for discussion:

Children (with the help of their parents) might ask themselves:

“Difficult” is a mild word to describe what it is to be a parent today. Raising children in the 21st century is a challenge not faced by prior generations. Thank God we have such wonderful tools as these filled with Torah wisdom and practical guidance to help us navigate the treacherous seas of the modern world.

Sarah Hermelin, M. Ed., is the author of Journey Together: 49 Steps to Transforming a Family, recently published by Urim and available on amazon.com here.

Life is for Love16 min read