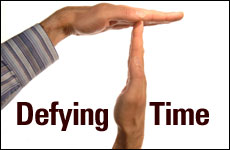 The afternoon Mincha prayer is a crucial moment to stop and appraise.

Details tend to overwhelm. Days are laden with tedious tasks, to-dos not yet done, and a constant, grueling drive toward accomplishment. Days are spent within rigid walls, legs tucked behind desks, eyes obscured behind screens. When does one have time to stop and think, access, reflect? Is there a moment to stop and gaze at the sky, or just a cursory glance upward to determine if an umbrella is needed today or not.

When a world of detail threatens to close in, and our connection to the Hand behind the incessantly scribbling pen grows dangerously dim, Jewish law inserts a pause. The afternoon Mincha prayer, set in the heart of a day's flurry, mandates a halt. In the morning, that auspicious time of day when the mind is still clear, it is easier to spare a moment for God. In the evening, as we wind down, we appreciate the time of communion and reflection.

This prayer is intended to intrude.

Mincha is comparatively short, composed only of one preemptory Psalm (Ashrei), and the 18 Blessings (Amidah), the quintessential prayer. Mincha must be said between midday and sunset. During the lengthy summer days, one has until late afternoon; the shorter winter days demand a moment be spared in the early afternoon. In any case, this prayer is intended to interrupt. Scheduled to intrude.

Amid the busy grind – phones, meetings, customers, kids – this time-out whistle is rarely a welcome sound. “I am busy right now,” we mutter with varying degrees of guilt and exasperation. “I'll be free a little later, right after I finish this.” And he continues to putter about importantly, constructing sand castles, drawing deliberate strokes in the soft mud, disregarding the storm clouds gathering overhead.

Related Article: How to Get Your Prayers Answered

Connect to the Timeless

Confronting one's own transience is not comfortable. It is unpleasant to consider that much of what we accomplish will not last. If we were to step, for a moment, outside the snow globe of daily activity, watching the fragile pieces of life frantically dance and spin, the present would be placed in humble perspective.

But these moments of introspection are greatly feared, and adroitly avoided. Moments of unsettling lucidity, upon which everyone must stumble at one point or another, compel the question: Where am I going? It is a question few care to face, for it is an inquiry, too fundamental to excuse a floundering response.

The Mincha prayer integrates this question into everyday life. Required to confront life's imminent qualms on a daily basis, one becomes increasingly more adept at doing so. The essential question – Where am I going? – eventually ceases to threaten. It begins, instead, to beckon.

For those invested exclusively in the mundane, Mincha proves a frustrating interruption. To the one willing to face his own ephemeral nature, Mincha provides a chance to escape those banal confinements. It is moment - snatched in a corner, an office, a synagogue - to stand face-to-face with one's Creator. It is an opportunity to defy transience by connecting to He who presides beyond the hourglass's narrow frame.

One who insists that a pause, a break, will eventuate of its own accord is sadly deluded. An object stays in motion until acted upon by an external force.

The afternoon Mincha prayer is a declaration of freedom. The deliberate pause communicates autonomy over the ceaseless daily duties that march endlessly across life's stage. In surrendering control of time, for a brief moment every afternoon, we do the only thing within our power to control time. We connect to the Timeless.

Hannah Dreyfus is a junior at Stern College for Women, pursuing a double major in Journalism and Judaic Studies. A current Editorial Intern for The Jewish Week and Managing Editor of The Observer, she hopes to pursue a career in Journalism.