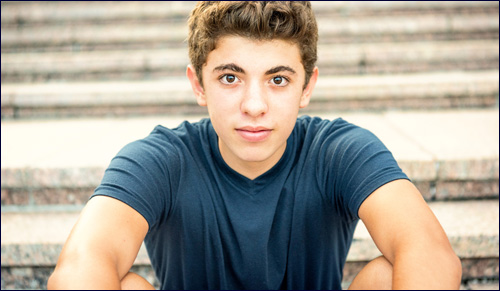 Growing up I felt like an outsider and didn’t care about being Jewish. Then I started taking a deeper look at my heritage.

I grew up in a primarily non-Jewish school district, just south of Pittsburgh, and I was pretty confused about my Jewish identity. While all of my friends decorated Christmas trees, went on Easter egg hunts, or had church early Sunday morning, I felt like an outsider. And as a young kid, this feeling of being an outsider stung more than a little.

Around 11, my confusion turned into anger. I didn’t make my travel baseball team that year, and my father, being the psychology professor he is, decided to make this into a lesson. He told me that the way the teams were selected was an unfair system, and then he connected this with another unfair and unjust event in history: the Holocaust. I became intrigued by the Holocaust, and since I could use my iPod touch to surf online, my 11-year-old self was exposed to everything from historical documentaries and pictures to neo-Nazi websites. It’s safe to say I was a bit upset about all of this hatred towards the biggest part of my identity.

As I got closer to high school, I had to address this feeling of being unsettled. I knew I had to embrace who I was. So as a 9th grader, I decided to join my high school’s Jewish Student Union. This club was like a warm hand reaching out to me – a hand that prevented me from parting ways with my religion, my culture, and my heritage. I was reintroduced to all the Jewishy things I hadn’t seen or done since I was a very young kid. It also introduced me to meaning and beauty of Judaism that I never knew even existed. I finally felt like I belonged somewhere in the Jewish community.

Growing up, my parents were never too strict on how I defined my Jewish identity. They urged me to always be proud of my heritage, but they never forced me to do anything. They introduced me to all the traditions, holidays, and Hebrew schooling, but I never clicked with much of it. And my folks were okay with that. On the other hand, my fellow Jewish friends were almost always forced into how their parents viewed a true Jewish identity. While their Christian friends were spending their time playing video games or pickup baseball, these Jewish kids were struggling through the numerous services and unbearable Hebrew classes in stuffy old shuls. To young kids, that doesn’t exactly make you want to run to the nearest Temple.

My friends were forced into a Jewish identity and I found mine on my own.

I’ve seen this phenomenon with two of my good friends. We’ve all basically known each other since birth and have done everything together – played baseball, went to JCC summer camps, and hung out with each other very often. Except for one thing: they were forced into a Jewish identity and I found mine on my own. This imposed practice has led to them both becoming strong disbelievers and, to an extent, even self-hating Jews: Jews that have become hostile towards their own ethnicity or religion in the name of extreme insecurity. It upsets me to see my own friends turn their backs on something so beautiful and so uplifting that was directly handed to them through their ancestors.

But it doesn’t have to be this way. Like I said, most of my Jewish friends were pushed into the whole experience. Most of them never truly got the chance to explore the relevance and meaning of their Judaism in a deep and personal way like I did. To them, Judaism and Jewish culture meant waking up early on Sunday for Hebrew school. It meant laboring through Saturday morning Shabbat services that were said in a language that they didn’t understand and didn’t care to understand. It meant being insecure and just wanting to fit in with everyone else. It meant being significantly different than every other kid – and not understanding why.

We can discover why we should care about being Jewish.

But I remain optimistic, and you should too. We can still reconnect to our heritage and discover why we should care about being Jewish. My fellow Jewish teens, we have access to all that being Jewish has to offer. As young Jews let’s unite and be active in our own respective Jewish communities, whatever being active as a Jew means to you. Pursue it and cherish it and don’t take your Jewish heritage for granted. We are the link in the chain of Jewish tradition and it’s up to us to pass that on to future generations. As the former Chief Rabbi of the United Kingdom, Rabbi Lord Jonathan Sacks once said, “Carry it and it will carry you.”

Zack Miller is a 17-year-old junior at Upper St. Clair High School, just south of Pittsburgh, PA. He likes to play baseball and is on the regional board for his BBYO region. In his free time he likes to write, design houses and buildings for fun, and spend time with his friends (both Jewish and non-Jewish).

A Taste of Talmud: Delving into a Case Scenario
The Softball Player
How This 6 Generation Bread Baker Brought Back Israel’s Ancient Grains
Olivia Newton John’s Grandfather was a Nobel-Prize Winning Jewish Physicist
Comments