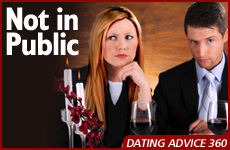 The guy I’m dating doesn’t want to be seen with me in public. Should I be concerned?

I met a guy over a year ago and we have been seriously dating for the past six months. During this time we have been dating on the down low, not being in the public eye at all together. He prefers to keep things private because he does not want the whole community talking about us, and in case things don't work out between us it would keep the least amount of rumors going around.

My friends all call this a shady relationship and are convinced that if he really cares for me, he would proudly parade me in the streets. Because of this, they resent him and resent my relationship with him.

I can't help but feel a big sense of sadness, because I am torn between my friendships and my relationship. These friends are getting in the way of my relationship and make me doubt whether he is the "one" or not. I know that we are compatible, and that he would be a great husband and a great father, but I can't help wondering whether my friends are right.

Shouldn't I be able to go to a nice restaurant with him and enjoy a nice meal without having to fear the community's prying eyes?

It's easy to jump to conclusions without a full understanding of a situation, and what you've described is something that can easily be misread. The man you are dating could be carefully guarding your privacy as a couple, but it is also possible that your friends are right, and he is not proud to be dating you. We think that by looking more carefully at him and at your relationship, and by speaking with him, you'll gain clarity about what's really going on.

Sometimes, daters are careful to keep things from the public eye until they are ready to become engaged. It may have to do with “rumors” they have been victim of in the past, or the fact that they are generally more modest, private people.

Could this be the case in your town? Do many people know each other, and is there a lot of interest in or gossip about who's going out with whom? This is one reason many people refuse to go out on dates in their immediate neighborhoods.

Did he have a prior relationship that was "big news" – either while he was dating or after it ended?

Is he someone who needs to be cautious of his public image – because of his family, his work, or his position in the community?

Is his approach to dating consistent with how he handles other personal matters?

If the answer to any of these questions is "yes," then he may have good reason to be discreet about your dating relationship. You can also look at his approach to other areas of his personal life. For example, does he refrain from telling many people about a job interview unless he receives a job offer? Does he wait to tell friends about a project he's developing until the plans have all come together? So does it makes sense that he’d keep quiet about something really important to him – such as dating a woman he is serious about – because he is afraid if it becomes public too early things may fall apart? His approach to dating may be consistent with how he handles many personal matters.

Until your friends raised their concerns, it seems that you were comfortable with his reason for being discrete about your dating. You might have gotten a sense that he's comfortable with you and enjoys spending time together. Perhaps you go to dinner or do things together in a neighboring community, and he seems happy to sit with you at a restaurant or walk with you down the street. He may compliment you about how nice you look, or let you know that he admires you. You may have sensed other small nuances that his feelings are positive and that he's comfortable when you're together. If so, your friends could be misreading the situation because they don't have enough information.

It's also possible that your friends are upset about your situation for a different reason. They may resent the fact that you're dating someone seriously and they aren't. Or, they may feel you aren't as involved with them as you used to be, or that you frequently choose the man you're dating over them. That may color how they feel about him and your relationship. If you think this may be an issue, try talking with your friends about their feelings, how much you value them, and that you want to find a better balance between your friendship and dating.

Even if you feel that your friends are upset with you for not spending more time with them, or you think they may have misread your situation, don't categorically push aside what they've said. Sometimes caring friends can see an issue that you can't or won't acknowledge. That's why it's a good idea to listen to your friends' concerns and try to look at them objectively to see whether or not they're valid.

Does he indicate discomfort with the way you dress or act?

If the questions we've asked made you feel uncomfortable, we'd like you to take another look at your relationship. Do you ever get the impression that he's not proud to be with you? Does he avoid taking you to public places even outside your community? Has he ever indicated discomfort with the way you dress, wear your hair, or act in public? These could be signs that he's not truly interested in a relationship with you, and your friends are justifiably concerned. The right man for you should admire your qualities and be proud to be with you.

You may be able to resolve some of your doubts by discussing them with this man. You can tell him how much you enjoy going for a walk or a drive together, or going out to eat, and ask what this “no-public” policy has been like for him. Consider inviting him (as your treat) to a concert, a half-day hike and picnic, country fair, or other public event outside of the eyes of community members. If he's reluctant to accept your invitation, ask him why and if there is something about it that makes him feel uncomfortable.

There's another area of discussion that will give you some insight into his attitude toward you. Your letter gives us the impression that you're dating for marriage and believe it's possible for your relationship to develop in that direction. We think that after six months of dating, it's important that the two of you be on the same page. If you haven't yet talked about this, doing so will give you more clarity about his true feelings for you.

You can say, "We haven't spoken about this before, but I think it's important to bring it up now. I hope that you know that I'm dating for marriage, and even though it may be too soon to know if we're right for each other, I think we're moving in a forward direction. Are you also dating for marriage? Do you also think our relationship has potential?"

He'll either tell you that marriage is on his agenda and he thinks you're moving in that direction; or he'll say no; or he’ll try to avoid answering the question. If he doesn't share your feelings, it’s unlikely that will change in the future.

As you can see from all of the things we've suggested, there's no fast answer to your dilemma. We hope that, after looking carefully at the situation, you'll have the clarity to answer your question yourself. And we wish you success in navigating the dating maze.

Dating maze #267 - French Toast
The Promise Of The Land
Which Chat Are You On?: Parshas Behar/Lag Ba’Omer
Do You Like Slow-Cooked Food? Thank the Jews
Comments
MOST POPULAR IN Dating Advice
Our privacy policy