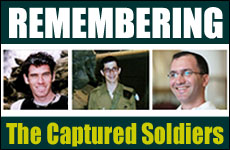 The moment we forget Gilad, Eldad, and Udi, they're lost.

What else could I do? A year ago, a former Israeli Chief Rabbi instructed Jews around the world to recite Psalm 102 for the release of captured Israeli soldiers Gilad Shalit, Ehud Goldwasser, and Eldad Regev. So every day, rain or shine, tired or not tired, with time or in a big rush, I read Psalm 102 nearly without fail.

And then, after a whole year of reciting the Psalm, one day this past week, I forgot. In the morning I couldn't find my book of Psalms, and then my baby started crying, and then my neighbor rang the doorbell, and then 1001 other things happened, and before I knew it, the soldiers' Psalm was totally erased from my memory.

I didn't remember it again until later that afternoon when I was sitting with my daughters getting ready to listen to their favorite children's radio program. I turned on the radio, and the first thing I heard was a young man saying, "I am Gilad Shalit, the son of Noam Shalit..."

I turned the radio up louder, and called urgently to my daughters, "Listen! It is the captured soldier you have been praying for in school! It's Gilad Shalit!" My daughters gathered closer to the radio, and we all heard Shalit's voice for the first time since his capture. He said, "Mom and Dad, brother and sister, my comrades in the Israeli Defense Forces -- I send to you from jail my greetings and my longing for all of you. A whole year in jail has passed and my health is still deteriorating. I am in need of a prolonged hospitalization."

It was as though I could hear the three soldiers captured last summer screaming to me from the edge of the abyss, "Don't forget us!"

I was shaken up. The very day I had forgotten to read his Psalm was the same day that I had turned on the radio, and heard Gilad Shalit urging us not to forget him.

It was as though, at that moment, I could hear the three soldiers captured last summer screaming to me from the edge of the abyss, "Don't forget us! Last summer, the Israeli Army went to war to bring us home, and returned home empty-handed. But don't you forget about us! The moment you forget about us, we are lost."

So, today I am sitting down to write about our soldiers captured a year ago. I am doing this so that I won't forget, and so that you won't forget either.

"I was in the kitchen preparing Udi his favorite meal in honor of his return from reserve duty that night," Karnit Goldwasser, wife of 31-year-old captured soldier Ehud (Udi) Goldwasser remembered, "and then I heard the news."

As part of her world-wide crusade to release her husband from captivity, Karnit Goldwasser addressed an audience in Washington, DC, speaking in a quiet voice and with great emotion about her missing husband, who, like her, was a graduate student in environmental engineering at Haifa's Technion Institute.

Karnit Goldwasser described her husband as a person who is passionate about protecting the environment and all its creatures, a person who, though he suffers from pet allergies, is the devoted owner of two cats and a dog named "Somebody" whom he adopted after he found him lying injured in the street.

He is a person, Karnit said, who is always there to lend a helping hand, a loving, caring human being who has many friends, and has a special love for children. Udi and Karnit, who marked their first anniversary this past October, had been hoping to soon start a family.

"Udi is a husband, a brother, a son. This is my husband. He is my soulmate. I miss him a lot." She then took a long drink of water as she choked back tears.

Gilad Shalit, who was taken hostage by Palestinian militants a year ago this month, is famous around Israel for his shy but persistent smile. Several months ago, a busload of Gilad's friend and family gathered at the place where he was kidnapped on the occasion of Gilad's twentieth birthday.

Gilad's father, Noam, spoke to the silent crowd, "Gilad, we have come here to mark your birthday. We will not be able to celebrate this year."

As he spoke, Gilad's mother, Aviva, stood between her two other children, Hadas and Yoel, with her head bent in silence.

The quintessential good kid, in high school Gilad was an honor student who excelled in math and physics, was always the first to volunteer when help was needed, and had an encyclopedic memory for sports statistics. He would spend his summers and his short breaks from the army lending a helping hand to his parents who, in addition to their regular jobs as a manager and an administrator, run a bed and breakfast in the North of Israel.

Because of a low medical profile, Gilad could have been exempted from serving in a combat unit when he was drafted into the Israeli army 11 months before he was captured. But he was highly motivated to serve his country, and despite the risks involved, he applied and was accepted to serve as a combat soldier.

A man who had attended the same synagogue as 26-year-old Eldad Regev for many years said of him: "Eldad is a person who rarely speaks of his life: he is a tall and impressive man, yet humble." Another friend described him as "amazing kid who everyone loves with sparkling blue eyes and a heart of gold."

In his senior year of yeshiva high school, his mother, Tova, tragically died of cancer. Despite his mother's untimely death, the very next year Eldad volunteered to serve his country in an elite infantry brigade.

Three days before his capture, Eldad joined his father and three brothers at his mother's eighth memorial service. On the day he was supposed to return home after three weeks of reserve duty, he was captured along with Ehud Goldwasser by Hizbullah guerillas on Israel's northern border.

Eldad, who would have begun Bar Ilan Law School this year, lived with his brothers, all three of whom, alongside their father, have fought constantly for his release.

Several months after his capture, over 100,000 people gathered in Tel Aviv to rally for the release of the captured soldiers. At the rally, former Justice minister Professor Yaakov Neeman declared, "The strong will of the Jewish people, and our faith in G-d, are what will return our sons home."

CRY FOR THE SOLDIER

Psychologists who have worked with captured soldiers following their release explain that during captivity, the soldiers tend to discover reserves of strength and faith that they never knew they had. What breaks them, the psychologists explain, is the image of their mothers and fathers and wives, worrying about them at home.

When we pray for the speedy release of Gilad, Eldad, and Udi, we should remember that we are not only praying for our captured soldiers.

We are praying for Gilad, the beloved son of Noam and Aviva, Ehud, the cherished husband of Karnit, and Eldad, the treasured son of Tzvi and Tova, who is certainly pleading for her son's release in the World to Come.

The night after I forgot to recite the soldier's Psalm, my 7-year-old daughter, Hallel, came running to me in tears. I asked her, "Why are you crying?" expecting tales of a stolen doll, or a pulled pony-tail, or a sister who stepped on her bed without permission.

She told me, "I am crying for the soldier."

And I held her in my arms. And with tears in our eyes, we sat and read the soldiers' Psalm together.

We all have a tendency to think, "I am only one person! What can I possibly do to help bring the captured soldiers home to their families?" But if every person who is reading these words would take one small step to bring Gilad, Eldad, and Udi home, then together we could make a real difference. Remember, even a marathon starts with a single first step.

What can you do? The following are a few suggestions:

• Commit to keeping a new mitzvah in the soldiers' honor, for example, lighting Shabbat candles every week before sunset, refraining from eating meat and milk at the same meal, attending a weekly Torah class

• Write to your representatives in the government. Tell them that you haven't forgotten about Israel's captured soldiers, and that they shouldn't either

• Forward this article to ten friends to raise awareness

• Give charity to merit the soldiers

• Donate directly to the campaign to release the soldiers: http://www.banim.org/en/index_en.html

This article has been modified from its original that appeared in The Jewish Press.

The Swifts and The 13 Holy Soldiers

Remembering Ari Fuld: Miracle In Lebanon
The Connection between Israel and the Jewish People
Grit and Torah
Why We Can’t See True Reality
Comments
MOST POPULAR IN Israel Diary
Our privacy policy