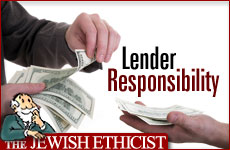 Lenders have an ethical responsibility not to put borrowers in an untenable situation.

Q. Do lenders have a responsibility to check the creditworthiness of borrowers?

Rabbi Yaakov ben Asher, one of the most important legal codifiers of the Middle Ages, describes the delicate balance of obligation between lender and borrower.

The lender is not allowed to dun the borrower if the borrower is unable to pay. In that case, the collection actions are just harassment:

It is forbidden to dun the borrower to make him repay if it is known that he has nothing. Even to appear before him is forbidden, because he will be ashamed when he sees the lender and has nothing to give. (1)

This ruling is in fact just an application of the Torah prohibition (Exodus 22:24), "When you lend to My people, to the poor among you, don't be to him as a creditor, [and] don't impose interest on him."

However, this limitation creates the potential for the borrower to exploit this ethical obligation by neglecting his own obligation to do his utmost to pay. Against this, Rabbi Yaakov ben Asher writes:

Yet this also creates a countervailing ethical obligation:

If the lender is aware that the borrower has this tendency, it is better not to lend rather than lend and then be required to dun, and thus transgress the prohibition of "Don't be to him as a creditor".

Obviously the lender already has a monetary incentive not to lend to weak borrowers, because after all they can't pay. But ending up in that situation is bad not only for the lender, but also for the borrower, and for society as a whole. Futile collection actions take up unnecessary energy and ultimately involve a kind of harassment.

I believe the same applies to the recent financial crisis. The lack of caution of lenders involved them in a monetary loss because people couldn't pay back. But that is not the total extent of the damage. Some lenders passed the loans on to other creditors, and much of the debt was ultimately passed on to the public in various explicit and implicit bailouts.

Beyond that is the human cost for the many borrowers who are now in a worse situation than if they had never taken out the loans in the first place.

Jewish tradition makes clear that if lenders plan to take aggressive steps to collect their loans, they have not only a prudential but also an ethical obligation to take reasonable steps to check the credit-worthiness of borrowers.

The Jewish Ethicist - Is It Charity?
What Makes Eli Run?
The Tyranny of Materialism
Science Enters the Mysterious Inner World of Consciousness
Comments
MOST POPULAR IN Current Issues
Our privacy policy