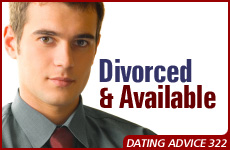 Though many marriages end in divorce, for some, the stigma remains.

While I find your dating advice to be spot-on, one topic that hits closer to home has yet to be addressed. I am divorced.

My marriage was a brief one, and at 25, I feel as “single” as my unmarried friends. But because dating sites request that divorcees disclose their status at the outset, I find myself facing a stigma by many single women, their friends and parents. In the course of my brief marriage, I did everything by the book. We sought counseling, and when it failed, we cooperated on our divorce.

I have rebuilt my life, and am doing my best to find my true soul mate, only to encounter an invisible wall of hostility. Just last month, I was introduced to a beautiful young woman with good character and strong values. She was open-minded and we dated twice. But on the advice of her friends and parents, she rejected me. They never met me – so how could they judge based on the sole criterion that I am divorced?

I wish people would not judge me so quickly. If anything, I feel more prepared for marriage than “regular” single people, because I have experience, I know the mistakes that occurred, and I am committed not to repeat them in a second marriage.

What advice would you offer me moving forward?

You've touched on a challenge that more and more young people now face – healing from the break-up of a brief first marriage and, once they're ready to start dating again, being viewed as "damaged goods." We agree that this is a terrible, unwarranted stigma, and we appreciate the opportunity to address it.

Let’s first understand why many people don't give divorced men and woman a fair chance in the dating world. One reason is that many daters use the wrong criteria for choosing people to go out with. They tend to look for someone that sounds perfect and uncomplicated on the surface, and turn down ideas that aren't. It usually turns out that the bearer of that "perfect" description isn't quite as perfect as s/he seems.

We always encourage people to gather all the relevant information about a date before saying "yes" or "no" to getting involved. If the person sounds promising but you're concerned about something in his or her history, find out more information. It doesn't matter if it is a divorce, a medical condition, a rough patch during adolescence, or past financial difficulties – it's not fair to judge someone just because one item indicates that they're not perfect. Too often, we've seen daters turn down amazing people who have almost all of the qualities that are important to them – because of a potential issue they didn't want to bother to check out.

Most "starter marriages" should never have occurred in the first place.

You've experienced what contemporary culture calls a "starter marriage" that can last anywhere from a few weeks to a few years. Unfortunately, we've seen many of these lately, often among couples who shouldn't have gotten married in the first place. They may have been infatuated with each other, but didn't share the core values and goals that form the foundation of a long-term marriage. Or they may not have had the maturity or skills to make the transition from being single to married. They may have been pushed into marriage before they felt ready, or may have hoped that they'd be able to resolve major differences once they were married.

It is unfair to stigmatize the people who went through this experience because they made a mistake. Pencils come with erasers, and Jewish law comes with a mechanism to end marriages that aren't working. It’s never easy to decide to get divorced, but most of them believe that the struggle and pain they've been through caused them to learn a lot about themselves, grown in many ways, and become better equipped to have a successful future marriage.

People who are dating for marriage should determine if the other person wants what they want out of life, is moving in the same direction, shares their core values, has character traits they feel are important, and sounds like an emotionally stable person who is capable of being a good marriage partner. If they're right for each other, then both partners will want to make their marriage a good one – and that first, brief marriage will not matter.

Having said all this, we'd be remiss if we didn't discuss one valid concern that many people have about dating someone who was divorced. They worry that perhaps the divorce occurred because the individual has a flaw that makes them a poor candidate for marriage, such as being controlling or having anger management issues. They're suspicious that "even when you check someone out, you never know the 'real' truth about the divorce."

We understand this wariness, but the truth is that you can never know the real truth about anyone until you get to know them well. A never-married person can be just as much of a "risk" as someone who was divorced after a brief first marriage.

That's why we always encourage daters to check out any reasonable suggestion. Ask questions to confirm that the information you've been told is correct. Get clear answers about how other people view the potential date's character and emotional stability. Specifically, the questions you ask should require narrative responses, not yes or no answers.

One question that many people ask is why the couple chose to divorce. But we think it is more helpful to find out about how they dealt with the divorce process. How cooperative were they with the Jewish and civil courts? Were they amenable to negotiating? How did they treat the spouse? Did they make any unreasonable threats or demands? How do they and their ex relate to each other now? The answers to these questions can give real insight into a person’s character.

Since these questions will be asked, it’s a good idea for divorcees to have one or two references and/or a rabbi who can honestly vouch for their character. (Actually, we think all daters should do this.) Needless to say, these references must possess integrity, and should know the person well. We recommend that the divorced dater spends time talking with his references about answers to the difficult questions that will be asked, and brainstorm about the best ways to present information in an honest, positive way.

Elephant in the Room

Once the dating process begins, it is each party’s job to learn as much about the other as possible. We give this advice to all dating couples, regardless of whether one of the daters has been married before. Talk to each other about your life histories, values, expectations, family, relationships, ways of dealing with life's stresses, and views on marriage and family. Vary what you do on dates, so that you spend time together in a variety of settings and experiences – when you're happy, tired, physically active, relaxing, involved in an interactive activity. Meet each other's friends and family and observe the dynamics.

We also suggest that a divorced person briefly mention the "elephant in the room" after the first few dates, if s/he is interested in continuing the courtship. One possible way to do so is:

"You haven't asked any questions about my divorce, even though I think you may have some. I don't believe it's a good idea to discuss details when we are just getting to know each other, but early on we realized that we wanted different things out of life (or whatever other reason applies). We tried very hard to make things work, but eventually both decided it was best to split up and get divorced. Rabbi Schwartz knows about the efforts we made, and if you have questions I have no problem with your asking him."

Back now to your situation: You wrote that was at this point in your courtship that the woman you were dating decided to stop seeing you. You told us that friends persuaded her to do so because you were divorced. We wonder if this is a conclusion you reached on your own, or is something she shared with you. Is it possible that a different factor discouraged this young woman, totally not related to the divorce? For example, it could be that she felt your world views, values, or expectations for the future were too far apart, or your personalities didn't fit?

On the other hand, if she decided to end things because friends and family discouraged her from going out with you, you’re justifiably upset. Friends don’t always give good advice. Your letter may make some people more aware of the unfairness of the stigma they place on divorced daters.

We hope that in the near future, you'll meet someone right for you. She's going to be accepting of the fact that you're divorced, and will appreciate you for all the very fine qualities that you bring to a marriage.

Dating maze #284 - Mother Interference
Korach 5782: Visit to Lift the Spirit
That Time The Ivy League Found A Way To Limit Jewish Enrollment
Would You Rather Be Right or Happy?
Comments
MOST POPULAR IN Dating
Our privacy policy