The Tragic Death of Daniel Tragerman 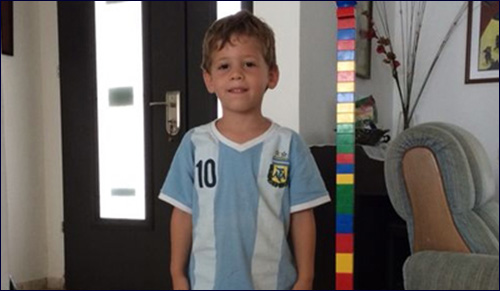 A timely message from the Book of Daniel.

His name was Daniel, just like the biblical prophet of old.

But he never made it past his fourth birthday. He was murdered by those who rejoiced when he died. He was just a little boy who loved to play, who idolized soccer star Lionel Messi, who identified with the comic book crime fighter Spiderman. He had an angelic face and a beautiful smile.

He was a bright little boy. He was smart enough to understand when he had to dash to the protected room at his Kibbutz Nahal Oz home. But on that Friday he only had three seconds between the alarm and the time when the mortar shell fell and he didn’t make it.

Like all little boys he had dreams of what he would love to do when he grew up. But that will never be. Daniel Tragerman was buried this past Sunday.

His family will never celebrate his bar mitzvah. His parents will never walk him down the aisle to join his beloved bride under the bridal canopy. Everything that he could’ve accomplished in life will remain an everlasting void, unfulfilled.

And his killers are celebrating in Gaza. Because this is how they measure success.

This was not an accidental killing. This was not an unfortunate death that inadvertently occurred by way of undesired collateral damage, the kind of death that Israel so deeply mourns when efforts to prevent terrorists from firing missiles into populated areas sometimes tragically results in the deaths of innocents. This was for them a declared victory. An Israeli, a settler, a Jew, a four-year-old little boy perished – and the leaders of Hamas pride themselves on this glorious achievement.

There ought to be a book written about Daniel. And remarkably enough I believe there was. It is called the Book of Daniel and it is a part of our holy Bible.

In it we are told that because of Daniel the message of the mysterious handwriting on the wall was revealed. The story is cryptic, yet at the same time profoundly illuminating. Belshazzar, the last king of Babylon, used the holy golden and silver vessels from Solomon's Temple at a drunken feast to praise "the gods of gold and silver, brass, iron, wood, and stone". Soon afterwards, disembodied fingers appeared and wrote on the wall of the royal palace the words Mene, Mene, Tekel, Upharsin.

The King’s advisers attempted to explain the meaning of the words. Their efforts were fruitless. The King then sought out Daniel, an exiled Israelite taken from Jerusalem who had served in high office under Nebuchadnezer.

And this was Daniel’s explanation:

Mene, Mene - God has numbered the days of your kingdom - and brought it to an end;

Tekel - you have been weighed on the scales and found wanting;

History records that on that very night King Belshazzar was slain, Darius the Mede became King and Belshazzar’s kingdom was divided between the Medes and Persians.

Daniel had correctly interpreted the handwriting on the wall. It remained his legacy for all generations. It is how Herman Melville’s classic, Moby-Dick, Ishmael ominously describes the appearance of St. Elmo's Fire on their whaling ship, the Pequod, when he writes, "...when God's burning finger has been laid on the ship, when His 'Mene, Mene, Tekel, Upharsin' has been woven into the shrouds and the cordage."

And it is the legacy I would hope Daniel Tragerman’s death leaves behind as we hear remarkable echoes of the biblical prophet Daniel’s warning implicit in the divine message of the handwriting on the wall.

Mene - While CNN and the New York Times as well as the rest of the world’s prejudiced media choose to ignore the quantity of rockets and missiles Hamas fired into Israel motivated solely by the desire - as made clear by its charter – to kill as many men, women and children as possible, we can be certain that every one of these instruments of murder are numbered by God. God counts the thousands upon thousands of attempts to kill His children – and for that there will be a final accounting. That is what was foretold by Daniel of old. That is the divine judgment of the handwriting on the wall that is as relevant today as it was for Belshazzar in biblical times.

Mene - While the United Nations continue to look for ways to offer Hamas respite and opportunities to re-arm during cease-fires ostensibly arranged for humanitarian purposes, and refuses to tally the total number of times Hamas has broken these very same cease-fires arranged in order to help them, God counts all of them. Broken commitments are tallied. Lies are calculated. Missiles fired in times of agreed-upon peace are totaled. And these too are joined to the Almighty’s decision to exact punishment against those who still haven’t been willing to read the handwriting on the wall that so clearly foretells their fate.

Tekel- Unlike those who give equal weight to Israel’s defensive measures against constant attack in a war they didn’t initiate to Hamas's double war crimes of firing rockets at innocent civilians while using their innocent civilians as human shields, God weighs actions on a scale guided by justice and righteousness. In God’s eyes, evil cannot masquerade as virtuous no matter how brilliant and deceptive its public relations.

Upharsin - the verdict is unavoidable. Those who despise the norms of civilized behavior, those who seek every opportunity to choose war over peace, those who glory in death and destruction will meet the destiny predicted by Daniel long ago.

To those who murdered Daniel just a few days ago, I urge them to read the book of the Bible that bears his name. Let them know that its message of divine judgment is as certain as the original handwriting on the wall.